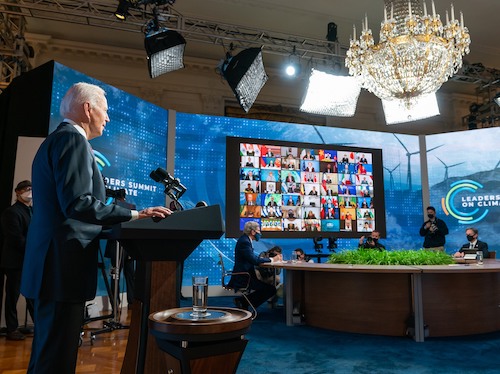 “No nation can solve this crisis on our own,” Biden told the virtual summit Thursday in an address from the White House. “All of us, and particularly those of us who represent the world’s largest economies, we have to step up.”

“We hear people talk about this being existential,” U.S. special climate envoy John Kerry told the Washington Post Wednesday. “For many people on the planet, it already is. But we’re not behaving internationally like it is, in fact, an existential challenge.”

The buzz around Biden’s announcement began earlier in the week, with multiple media reporting the target in the 48 hours before 40 world leaders were set to gather for the virtual summit. “The planned U.S. pledge represents a near-doubling of the target that the nation committed to under the 2015 Paris climate agreement, when [then-U.S. president] Barack Obama vowed to cut emissions by 26 to 28% compared with 2005 levels,” the Washington Post wrote Tuesday.

“The goal is largely in line with what environmental groups and big businesses including McDonalds, Target ,and Google have pushed for,” the New York Times added. “They and others argued that cutting emissions at least 50% from 2005 levels by the end of the decade is the only way to put the United States on a path to elimination of fossil fuel pollution by the middle of the century.”

Much the same messaging was coming from the White House in the days leading up to the summit.

“I would argue that there’s opportunities for us to be able to be very aggressive, and we’re going to take that opportunity,” White House National Climate Advisor Gina McCarthy told National Public Radio.

“The Biden-Harris administration will do more than any in history to meet our climate crisis,” Secretary of State Antony Blinken said Monday. “This is already an all-hands-on-deck effort across our government and across our nation. Our future depends on the choices we make today.”

“The responsibility feels like a lot,” a White House climate official told POLITICO. “We’ve been hoping for this moment for a long time. And I think that just being here and knowing that we have an opportunity to actually make what I hope is a pretty big step forward, and almost a step change, it really feels exciting.”

The administration made the 50 to 52% target official in a fact sheet released Thursday morning.

“The United States is not waiting, the costs of delay are too great, and our nation is resolved to act now,” the release states. “Climate change poses an existential threat, but responding to this threat offers an opportunity to support good-paying, union jobs, strengthen America’s working communities, protect public health, and advance environmental justice.”

But Biden’s target still falls short of the United States’ fair-share contribution to global climate action, as a wealthy country that holds the record for history’s all-time biggest emitter of the greenhouse gases that cause climate change. The U.S. Climate Action Network (USCAN) says America’s actual fair share contribution by 2030 is a 195% reduction from 2005 emission levels by 2030—including a 70% cut in domestic carbon pollution, with the rest made up of climate finance support to developing countries. The target is based on America’s capacity as the world’s wealthiest country, its history as the world’s biggest carbon polluter, and its “moral and legal obligation to protect human rights which are threatened by the climate emergency”.

U.S. Rep. Alexandria Ocasio-Cortez (D-NY) and Sen. Ed Markey (D-MA) formally reintroduced their Green New Deal legislation, with its call for net-zero emissions in 10 years, in the lead-up to the leaders’ summit, Reuters reports. “For so long, our movement toward a sustainable future has been divided with really just this false notion that we have to choose between our planet and our economy,” Ocasio-Cortez said. “And we decided to come together in sweeping legislation that not only rejects that notion, but creates a plan for 20 million union jobs in the United States of America.”

In its reaction to the formal announcement yesterday, the World Resource Institute says the 50 to 52% target is “ambitious and attainable”, citing Colombia, the European Union, the United Kingdom, and China as countries that have also accelerated their carbon reduction plans.

“President Biden has come through with a bold emissions reduction target that should make the world sit up and take note,” said WRI Interim President and CEO Manish Bapna. “This target will serve as the North Star for President Biden’s domestic agenda. It will create a more equitable and prosperous society. At a time when the country is looking to bounce back from the pandemic, this goal will help unleash millions of good jobs, boost business, and drive innovation.”

“By announcing a bold target of cutting emissions 50-52% below 2005 levels by the end of the decade, President Biden has met the moment and the urgency that the climate crisis demands,” agreed Nathaniel Keohane, senior vice president for climate at the U.S. Environmental Defense Fund (EDF). “The message from the White House is clear: The United States is ready to go all-in to beat the climate crisis. This target aligns with what the science says is necessary to put the world on the path to a safer climate and vaults the U.S. into the top tier of world leaders on climate ambition. And it’s backed up by numerous analyses demonstrating that it can be met through multiple pathways using existing technologies.”

“For four years, the world wondered what’s going on with the United States,” Keohane added. “Now they’re going to have to race to keep up.”

Climate Action Tracker greets the pledge as “the largest additional national reduction proposed in the 2020/2021 round of climate target updates,” enough to reduce the global emissions gap by 5-10%—but “not quite enough to bring its domestic emissions in line with what would be needed to achieve the Paris Agreement’s 1.5°C limit.” That would take a 57 to 63% reduction in domestic emissions, plus support to other countries.

Can the U.S. Deliver?

But the administration must also navigate awkward questions about whether the U.S. can really deliver on a sustained climate commitment, with the world still reeling after four years of fossil fuel deregulation and climate hostility from the Trump White House.

“The credibility of Mr. Biden’s pledge rests on his ability to enact a series of aggressive new domestic policies designed to sharply reduce emissions, particularly from the nation’s two largest sources of greenhouse pollution, cars and power plants,” the Times said. “But other countries remain skeptical of the durability of such rules, given their experience with the Trump administration. As head of the Environmental Protection Agency in the Obama administration, Ms. McCarthy wrote similar rules, only to see them obliterated.”

“The most important part of anything that they do is to make sure that it’s durable,” said Michael Oppenheimer, a Princeton University professor of geosciences and international affairs. “We really need to show in some very tangible way that the particulars can’t be reversed on a dime.”

And that means “a lot of things have to go right,” he added. “It really is going to require a very focused effort to get this done.”

A 50% emissions cut “isn’t the world’s most aggressive target, but it puts the U.S. among the four most ambitious countries,” National Public Radio writes. “Still, achieving that target by 2030 won’t be simple, requiring both political buy-in and a sweeping deployment of cleaner cars and clean energy sources.” Much of the U.S. coverage this week has focused on the Biden infrastructure plan as a key enabler for the country’s carbon target, and NPR points to three broad categories of activity that will be essential: replacing coal-fired electricity with renewable energy, electrifying transportation, and driving emission reductions in buildings, industry, and land use.

“It’s pretty ambitious,” EDF senior analyst Danielle Arostegui told NPR. “This is not an easy target to achieve but we think it is something that is achievable if we really put the pedal to the metal here and put these policies in place that we need to actually get there.”