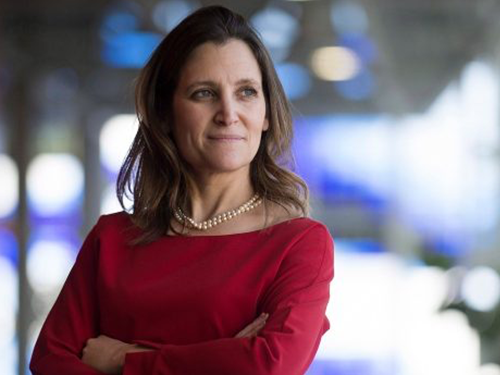 The federal government is getting decidedly mixed reviews for a 2021 budget that announces but doesn’t quite spell out C$17.6 billion in green recovery spending over the next five years, while tipping a 2030 emissions reduction goal of 36% that may be superseded within days by a more ambitious government target.

Many climate analysts and observers are greeting the mammoth, 724-page budget as a step in the right direction that doesn’t deliver nearly the funding or action commitment the climate crisis demands. With specific commitments spread across multiple chapters of the document, and new funding intermingled with past announcements, it wasn’t immediately clear what was included in Finance Minister Chrystia Freeland’s pledge of “$17.6 billion towards a green recovery to create jobs, build a clean economy, and fight and protect against climate change”.

The Department of Finance hadn’t responded to a request for a full calculation by the time The Mix went to virtual press early this morning. But it was simple enough to compare the declared total, mostly spread over five-year spending commitments, to the minimum of almost $18 billion in subsidies and public financing the government lavished on the fossil industry in 2020 alone, according to an update released last week by Environmental Defence Canada.

The budget produced a much bigger flurry with a calculation that the new funding measures, coming on top of past federal climate programs, added up to a 36% emission reduction target for 2030, incrementally more than the 31% Prime Minister Justin Trudeau promised in mid-December. Days ago, Trudeau was expected to commit to a 40% reduction when he participates in U.S. President Joe Biden’s climate leaders’ summit tomorrow and Friday, and the budget reference triggered a flurry of Twitter traffic urging him to go farther still.

“The Canadian federal budget presentation could be the first good news of the week & a key step towards COP26,” tweeted European Climate Foundation Chair Laurence Tubiana, an architect of the 2015 Paris Agreement. “@JustinTrudeau should commit to doubling Canada’s #climatefinance pledge & cutting emissions by 60% by 2030. This target would set Canada on a pathway to #netzero by 2050.”

“This is a big week for climate action!” agreed former U.S. vice-president and Climate Reality Project founder Al Gore. “As the US finalizes its commitment to reduce emissions, we need other leaders to step up also. I hope @JustinTrudeau & Canada will commit to reduce emissions at least 50% by 2030. Only through bold action can we address the climate crisis.”

“In light of Canada’s new budget and ahead of the #ClimateLeadersSummit, Mary Robinson encourages #Canada to step up by doubling its #climatefinance and ambition, with at least 50% cuts in emissions below 2005 levels by 2030,” added The Elders. Elders Chair Robinson, the former president of Ireland, stressed that “Canada needs to have a sense that it’s not just words at a summit,” during a news conference last week hosted by Climate Action Network-Canada (CAN-Rac).

It’s quickly becoming conventional wisdom that Biden will declare a target of 50% by 2030, the Washington Post reported Tuesday afternoon, though the White House has yet to confirm the figure.

Climate-related highlights of the budget include:

• $2.3 billion over five years to address the biodiversity crisis, and conserve up to a million square kilometres of land and inland waters to meet the government’s 2025 deadline to designate 25% of Canada’s land and freshwater as protected areas, along with $976.8 million for marine and coastal areas;

• A spate of just transition measures, from a national early learning and child care strategy to a $15 federal minimum wage, that had one media analyst declaring that Freeland had swept away three decades of economic orthodoxy in a single budget;

• $5 billion in new funds and $8 billion in total for a Net Zero Accelerator, with a mandate for “decarbonizing large emitters, transforming key sectors—from steel and aluminium to cement—and accelerating the adoption of clean technology across the economy—for example, the auto and aerospace sectors”;

• $1.4 billion over 12 years for a new Disaster Mitigation and Adaptation Fund, along with $11.7 million over five years “to support projects such as wildfire mitigation activities, rehabilitation of storm water systems, and restoration of wetlands and shorelines”;

• A $319-million, seven-year program to support research, development, and demonstration of carbon capture, utilization and storage (CCUS) technology, along with a new tax incentive to speed up adoption of CCUS technology;

• $94.4 million over five years “to increase domestic and international capacity and action to address climate change”;

• A plan to raise $5 billion through the country’s first-ever green bond.

The budget envisions shifting refundable household tax credits for the federal floor price on carbon from annual to quarterly payments, and funding a five-year, $36.2-million initiative “to develop and apply a climate lens that ensures climate considerations are integrated throughout federal government decision-making.” Ottawa will also launch a consultation on border carbon adjustments, and mandate climate risk disclosure for Crown corporations with more than $1 billion in assets, beginning next year at the latest.

“I welcome the introduction of mandatory climate-related financial disclosures standards for Canada’s Crown corporations, therefore fixing important transparency issues around fossil fuel funding by Export Development Canada, for example,” Independent Senator Rosa Galvez said in a release. “This initial step should evolve in the direction set by France and New Zealand, which are legislating mandatory disclosure in the markets, not just for Crown corporations.”

The budget contains fewer than 10, mostly technical instances of the word “fossil”, and no reference to the small modular nuclear reactor program that has been lobbying heavily for federal support.

Reaction from the climate community mostly acknowledged the good news in the budget, but pointed to the much bigger, more transformative commitments the climate crisis demands.

“Some investments made by Budget 2021 are extremely helpful— particularly investments in clean transportation, energy-efficient homes, resilient agriculture, and Canada’s first green bonds,” said Teika Newton, CAN-Rac’s membership and domestic policy manager. “Some investments made by Budget 2021 are extremely worrisome—investments in carbon capture and storage risk perpetuating our dangerous addiction to fossil fuels, and some of the forestry investments perpetuate a transactional relationship with nature that treats it like a commodity we can trade. Yet the big takeaway is this: we are in a time of changing norms, and Budget 2021 does not present a vision for climate-safe, transformational change.”

“The budget is a great step forward despite the fact that it comes at a moment where the country needs the courage to take a giant leap forward to recover from the impact of COVID-19,” Galvez said. “Despite progress towards more ambitious emissions reductions by 2030, our contribution still falls short of our fair share.”

The federal plan “contains unprecedented investments to tackle climate change and environmental priorities,” said Julia Levin, climate and energy program manager at Environmental Defence Canada. “However, hiding in the details of this budget are some concerning elements, including a new commitment of more than $6 billion in financial support and new tax breaks for high-emitting sectors, including oil and gas. Without robust conditions, this money may go to support technologies, including carbon capture and fossil fuel-derived hydrogen, that will delay a transition away from fossil fuels and lock us into decades of increased carbon pollution.”

The budget shows the Trudeau government “investing in programs to cut emissions in one breath, and announcing new financial support and tax breaks for some of the worst climate polluters in the next,” said Sven Biggs, Canadian oil and gas director at Stand.earth. “While we are glad to see an increase in the ambition of Canada’s emissions reduction target, it is still far too low. Canada needs to match the commitments of other leading industrialized countries to reduce emissions globally, and that means increasing Canada’s emissions reduction goal to 60% below 2005 levels by 2030.”

“Canadians demanded a green and just recovery,” said Greenpeace Canada Senior Energy Strategist Keith Stewart. “Trudeau has responded with funds for Indigenous communities, child care, and climate action, but fails to tackle our fossil fuel addiction and deepening inequality. To build a better normal, we must build back fossil-free.”

Karri Munn-Venn, senior policy analyst at Citizens for Public Justice, acknowledged new federal dollars for early learning, child care, and expanded employment insurance and emergency benefits, all consistent with the principles for a just recovery that 150 Canadian non-profits and campaign groups adopted last year. “Still,” she wrote, “Budget 2021 makes it clear that the federal government has yet to grasp the severity and urgency of the global climate crisis or the devastating ramifications of inadequate action.”

“This budget does not reflect that we are in a climate emergency,” said ClimateFast Co-Chair Lyn Adamson, citing an energy retrofit investment equal to just 10% of what would be needed to hit the country’s 2030 carbon reduction target. “Right now, climate is a side show, not central as it needs to be for civilization to continue,” with the result that “we are abandoning our children and grandchildren with inadequate action.”

Many creatures of the deep face a stifling future