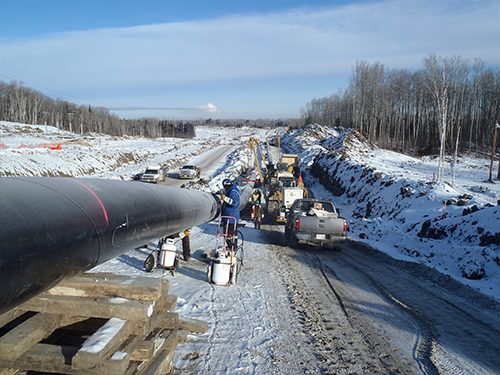 Enbridge’s newly-minted enthusiasm for asserting a warm and fuzzy intersection between its activities and the spiritual and cultural practices of Indigenous Peoples is merely acting to highlight the company’s poor commitment to consent.

In January, the Canadian pipeliner posted a video depicting a member of the Leech Lake Band of Ojibwe performing a traditional prayer and smudging ceremony for the health and safety of those working on the Line 3 pipeline in Minnesota. But, says Indian Country Today, if the company thinks the video proves a sense of “commitment, respect, and connection to Native peoples and the lands affected by the Line 3 project,” it should think again.

In the video, the Leech Lake citizen says she is “very honoured” to work with Enbridge, and that the company is “looking at our culture, and how to be respectful to the land and the people.”

But, said Kate Finn, a citizen of the Osage Tribe and executive director of First Peoples Worldwide, such corporate PR is simply a smokescreen. “They’re not committed to understanding what tribes and tribal governments have to say about a project prior to planning, design, and implementation,” she told Indian Country Today. “Their approach seems to be to get buy-in without affecting their bottom line.”

Citing a recent report in the Harvard Business Review, ICT observes that “Fortune Global 500 firms spend about US$20 billion per year” burnishing their images as good corporate citizens.

“This is what you call media manipulation, where a corporation tries to trick the community into thinking they are inclusive and considerate but are really showboating and exploiting to attain their means,” said Daniseton Vendiola of the Swinomish Indian Community, in a Facebook critique of the Enbridge ad.

Enbridge representatives, however, say otherwise. Communications specialist Juli Kellner told Indian Country Today the company’s goal “is to have robust tribal citizen contributions in our environmental and cultural resources survey efforts” in order to “refine our pipeline route alignment, to avoid sensitive cultural and environmental resources, thoughtfully design wetland and waterbody crossings to avoid and minimize impacts, and develop restoration plans that will restore the project right-of-way as close as we can to pre-construction conditions.”

What Kellner did not explain, however, is what happens if the “robust tribal citizen contribution” to a conversation about pipelines is an unambiguous “No.”

While a “no” is precisely the response of many Indigenous peoples whose ancestral lands and waters are currently being endangered by Enbridge pipelines, the likely impact of that rejection on the company’s decision-making is on record.

In a discussion paper titled “Indigenous Rights and Relationships in North America Energy Infrastructure”, Indian Country Today says, Enbridge emphasizes that the principle of Free, Prior, and Informed Consent (FPIC) is not legally binding.

“Although some have interpreted FPIC as a right to veto a project, the federal governments of both Canada and the U.S. interpret it as a call for a process of meaningful consultation with Indigenous peoples,” the discussion paper states.

That perspective, writes Indian Country Today, “leaves the company in control” of how far it will go for social responsibility. “There are no benchmarks or accountability measures in place.”

And in the absence of such measures, little has changed. “I still don’t see them taking any meaningful steps in working with tribes,” said Kate Finn. “They continue with the same old premise that consultation rather than consent is good enough.”

In the long run, she added, that approach may prove a poor strategy. “For as long as they continue along that route, they are incurring extensive social risks and may be incurring human rights violations as well as risks to their operations.”