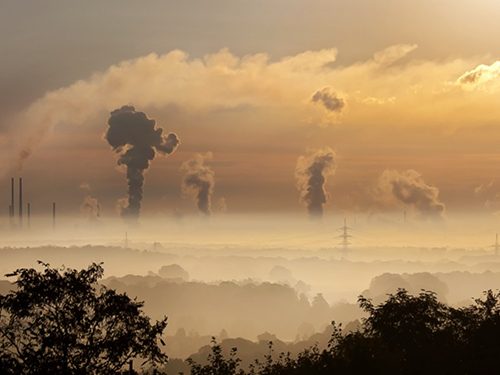 The latest Global Trends report from the U.S. National Intelligence Council offers harrowing projections alongside glimmers of hope in its visioning of how the post-pandemic world may—or may not—respond to the climate crisis by 2040.

The new report—which the NIC produces every four years for the incoming federal administration—“finds a world unsettled by the coronavirus pandemic, the ravages of climate change—which will propel mass migration—and a widening gap between what people demand from their leaders and what they can actually deliver,” writes the Washington Post. The pandemic, the report authors seem to say, “is a preview of crises to come.”

What follows below is a brief synopsis of the report [pdf], and its detailing of how the intertwining threats of the climate crisis and environmental degradation may “force” change, for better and for (much) worse, over the next 20 years.

This “partnership”, the authors say, will be devastating. “During the next two decades, population growth, rapid urbanization, and poor land and resource management will increasingly intersect with and exacerbate climate change effects in many countries, particularly in the developing world,” states the report. “With coastal cities growing, more people than ever will be threatened by a combination of storm surges and sea level rise that worsen existing coastal erosion.”

Water is flagged as a particular concern, with the authors warning that administrative failure to effectively govern the resource“will remain the primary driver of water stress during the next two decades”—stress that will inevitably lead to conflict. Notably, the authors do not flag water scarcity itself as a driver of conflict, although this tragic reality is already unfolding.

Species loss will be economically devastating, particularly in the oceans. “Warming ocean temperatures threaten to kill many more coral reefs—already they have declined by 30 to 50%, and at 1.5°C warming, they could decline by 70 to 90%—further threatening fishing and tourism industries,” the authors write.

The NIC does foresee “mitigation gaining traction” as it looks out to 2040. However, “as climate modeling improves, divisions are likely to become more pronounced between those who advocate reaching net-zero emissions over decades by transitioning to new technologies and those who argue that net-zero must be achieved more quickly to prevent the worst outcomes.” Limiting the global temperature increase to 1.5°C “will require unprecedented changes in energy consumption and production to allow developing countries to grow their economies while not offsetting the carbon reductions from developed countries.”

Fossils will Retain a Foothold

While the energy transition will move forward, the authors say, they foresee the ongoing primacy of fossil fuels out to 2040. However, solar and wind “are almost certain to grow faster than any other energy source because of technological advances and falling costs.” Nuclear may also become a contender, they add, “particularly if new, safer designs emerge.” The report also predicts an acceleration of energy efficiencies, as well as more decentralization in the energy grid, and “regulatory and investment choices by governments, businesses, and consumers”—all boons in terms “of greater energy resilience and self-sufficiency for states.” The NIC also envisions a role for “key emerging energy technologies,” including green hydrogen.

While “most of the modelled pathways to limit warming to 1.5°C involve a substantial expansion of carbon dioxide removal (CDR), primarily through afforestation and bioenergy with carbon capture and storage (BECCS),” the report says other technologies may come into play, including “soil sequestration, ocean fertilization, and direct air capture.” Beyond observing that BECCS is “still a nascent technology,” the NIC does not explore the myriad problems associated with the process. The report authors do, however, point out that “currently about 25 commercially operational CDR projects offset a negligible amount of yearly emissions, and efforts to scale up CDR will face policy, technological, and economic constraints absent market incentives.”

“A key challenge for these efforts will be funding for vulnerable communities,” writes the NIC—as will the choices governments face as they decide where to prioritize funding. “Public-private partnerships are innovating new insurance approaches aimed at building resilience to climate risks, such as insuring natural assets like the Mesoamerican reef off Mexico or index-based weather insurance for local farmers in Kenya,” the report states. The NIC also reflects, with what reads like wariness, on the likelihood that as the world gets closer to breaching Paris Agreement goals, “states and non-state actors will more aggressively research, test, and possibly deploy geo-engineering measures—deliberate large-scale interventions in the Earth’s natural systems—to try to counteract climate change.” Noting that both solar radiation management and its derivative, stratospheric aerosol injection, are attracting considerable interest, the report warns that the “possibly catastrophic unintended side effects are not well understood.” To avoid risk and the attendant conflict, they say, leadership is urgently needed.

The NIC also predicts increasing pressure for more—and more effective—climate finance. “Developing countries will increasingly demand that developed countries meet their commitments to provide financing to help vulnerable populations adapt. Greater demands will be made on international financing vehicles such as the Green Climate Fund, which has approved US$4 billion worth of adaptation projects.”

By 2040, there will be more conflict over resource scarcity, especially in countries where fissures already exist due to either ethnic or religious polarization or natural resource development. The NIC foresees added strain on international systems, from international refugee law (or the lack thereof) to organizations that manage shared resources, like the Arctic Council or the Nile Basin Initiative.

The final section of the NIC report describes five possible scenarios for the world in 2040 by “exploring various combinations of how the structural forces, emerging dynamics, and key uncertainties could play out.” Framed by both the Post and Reuters as the “rosiest” of scenarios, the “Renaissance of Democracies” pathway pictures the United States as the re-emergent global superpower in 2040—benevolent in vision and action, and working multilaterally and within the rule of law in a world in which, oddly, climate change barely deserves a mention.

Far less rosy is the “Competitive Co-existence” scenario, which imagines that the U.S. and China are back to full trade. “The risk of major war is low, and international cooperation and technological innovation make global problems manageable over the near term for advanced economies, but longer-term climate challenges remain” in this future. From a climate change perspectives, wealthy countries are investing in technologies to adapt and survive, while developing countries suffer, “presenting second-order security challenges.”

Grimmer still is “World Adrift,” which envisions a “directionless, chaotic, and volatile” global society. Climate change and instability are unaddressed, while “international rules and institutions are largely ignored” by both large governments and non-state actors. The “Separate Silo” scenario, meanwhile, foresees the world in 2040 as having “fragmented into several economic and security blocs of varying size and strength.” Self-sufficiency, resiliency, and defence is the rule, while “climate change, health care disparities, and poverty falter” under a disorganized approach rife with “risky solutions.”

Finally, there is “Tragedy and Mobilization.”A harrowing combination of entirely believable apocalypse and miraculous regeneration, this scenario predicts that, “in 2040, a global coalition, led by the European Union and China working with NGOs and revitalized multilateral institutions, is implementing far-reaching changes designed to address climate change, resource depletion, and poverty following a global food catastrophe caused by climate events and environmental degradation.”

In this brave new world, suddenly so much wiser and kinder, “richer countries shift to help poorer ones manage the crisis and then transition to low-carbon economies through broad aid programs and transfers of advanced energy technologies, recognizing how rapidly these global challenges spread across borders.”

The NIC report also predicts that the climate challenge will inspire “many more actors” to take up the fight. “In 2018, nearly 10,000 cities and municipalities in 128 countries took some form of climate action, as did 6,225 companies headquartered in 120 countries, representing US$36.5 trillion in revenue, larger than the combined GDP of the United States and China,” the authors write.