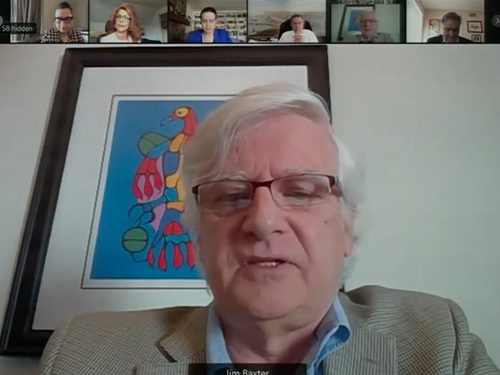 Toronto’s retiring director of environment and energy issued a broadside on his way out the door last week, warning councillors that there’s “no vaccine for climate change”, and an urgent need for the city to pick up the pace on its climate plan.

“To meet our goals we need a common vision, division by division, councillor by councillor, manager by manager, and I’m sad to say I don’t believe we are there,” Baxter told an April 8 council meeting.

“Climate change is a global scourge of much greater magnitude than COVID-19,” he added. “It has a much longer timeline than a global pandemic but the impact of it will be even greater. It is up to us to work our way out of this, but we all need to believe this is the right thing to do financially, economically, morally, and ethically. We need to take individual action for the good of us all.”

The 11-year city hall veteran spoke just minutes after Mayor John Tory had praised him for helping Toronto “take its place in the international roster of global cities that have committed themselves to climate change.” [Let’s assume he meant action on climate change—Ed.] Baxter “was very much a part of making sure we didn’t just join” various international fora for municipal climate leaders, “but were respected participants, had plans and achievements of our own to be able to trumpet.”

Tory cited Baxter’s role in creating “meaningful and impactful” programs like TransformTO, which “will ultimately change and is in the process of changing how we live, how we work, and how we build over the next 30 years,” not just as a carbon-neutral city, but to “generally become a healthier, more prosperous place.”

But the path to funding and implementing TransformTO has not been nearly as smooth or happy as Tory may have implied. In 2017, council unanimously adopted the plan’s low-carbon blueprint, but the price of unanimity was an agreement to cherry-pick the carbon reduction measures the city would actually fund, leaving the pricier items to other levels of government or the private sector.

Though local climate groups were prepared to take the win once the vote was done, there was plenty of concern beforehand. “It’s like saying, ‘Which of the legs in a three-legged stool are we going to get rid of?’” the then-executive director of the Toronto Environmental Alliance (TEA), Franz Hartmann, said in the weeks leading up to the vote.

In 2018, the city allocated C$2.5 million for TransformTO programs—an increase from $330,000 the previous year, but still just a fraction of the $6.7 million Baxter and his team had recommended. A year later, Toronto adopted a climate emergency resolution, but was still poised to begin work on a C$3.6-billion project to rebuild the notorious Gardiner Expressway, a move that would keep the road in operation for most of this century.

“It’s definitely a contradiction,” Sarah Buchanan, program manager, clean economy at Environmental Defence Canada, told CBC at the time. “This major infrastructure project will lock us into more carbon pollution from cars,” when “there were cheaper, greener options that were available.”

Then in early March, 2021, The Atmospheric Fund (TAF) declared “code red” for the city and called for a “much-needed reality check” after issuing a report that showed greenhouse gas emissions rising 7% in Toronto and 5.2% across the Greater Toronto and Hamilton Area in 2018. It pinpointed natural gas as the major cause of the emissions.

In his exit speech last week, Baxter may have shed light on what was behind the city’s mixed performance. “There are those both on staff and on council who still believe that climate change is not real, that actions to mitigate climate change are too expensive, that the city’s resources should be committed to other initiatives, and that we can put off acting until the future,” he said.

But “following this path will lead to our inability to deliver on our stated goals of a carbon-neutral city by 2050 or before,” he warned. “Further, we’re kicking the can down the road and putting the burden of climate action on our children.”

‘It is very concerning to see Toronto’s climate progress slip away as City Council backs away from full funding of climate transition planning under pressure from COVID,” at a time when “emissions are rising, not falling,” she told The Energy Mix in an email yesterday. As residents of Toronto we must call with a clear and united voice for strong climate action that will bring with it good jobs, equity, and a better quality of life for all residents.”

TAF CEO Julia Langer credited the city with introducing the Toronto Green Standard, one of North America’s leading building codes, to drive down emissions in new construction and serve as a “catalyst for change in other municipalities across Ontario”. She said the city is making progress on energy retrofits, “although not fast enough”, with a program to mobilize big property owners to speed up their retrofit work. And while Toronto’s transportation emissions are still on the rise, the city has North America’s largest e-bus fleet, with plans to shift the whole fleet to zero-emission vehicles by 2040.

But all of that activity still falls short of what’s needed to hit the city’s 2030 emission reduction targets or offset growth, Langer said. That means a new strategy to decarbonize existing buildings, due to reach council in June, “needs to be ambitious, with specific policy and practical mechanisms for implementation, and protections for affordability and equitable access,” she told The Mix.

The issues Baxter raised in his council speech certainly aren’t unique to Toronto, and Montana Burgess, executive director of the West Kootenay EcoSociety, had her own take on how to speed up and fund the work that needs to be done.

“Small towns and rural communities have very limited tax bases, so we need the provincial and federal governments to provide more funding to improve peoples’ lives,” she told The Mix. That means “curbing climate pollution in the big areas, like public transit, better sidewalks and bike lanes, and making public buildings and low-income and working family homes retrofitted to cost less to heat and cool.”

With a federal budget coming up Monday, Burgess pointed to an easy enough place to find the funds. “Stop giving public tax money and tax breaks to oil and gas companies and increase taxes on the wealthy,” she said. “Put those billions of dollars instead to support low-income and working Canadians to get to and from work and school, and live more affordably in their homes.”