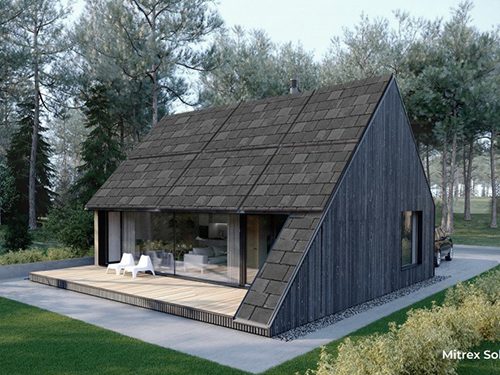 “Our solar roof solutions are ideal for homeowners looking to reduce their carbon footprint and make a positive impact on the environment,” said CEO Danial Hadizadeh. “With our streamlined installation process, homeowners are now able to tap into solar technology to contribute to a net-zero carbon future without compromising the look of their home.”

The release says Mitrex isn’t the first to develop rooftop BIPVs that are pleasing to the eye. But until now, the installation process has required homeowners and renovators to replace entire rooftops, rather than integrating the panels with an existing surface. The new design uses the “same installation methods as traditional rooftop panels, so any qualified roofer can install them.”

The company says its Etobicoke plant, in the heart of the Greater Toronto and Hamilton Area, can churn out thousands of high-quality panels per month.

The units are rated at 18 to 22% efficiency, feature frameless panels that maximize the surface area for solar gain, are treated with an anti-soil coating to minimize maintenance, and come with a 25-year warranty.

Last month, Electek reported that BIPVs were a disappointment in the years after Tesla introduced its solar roof in 2016, amid great fanfare. “Since then, BIPV has been a niche part of the residential solar industry, perceived as too expensive or experimental compared to the cost of separately installing solar on top of a traditional roof,” the industry newsletter stated.

“But big drops in solar cost and an increase in panel efficiency over the past few years, combined with innovation in business models, mean that BIPV could become the most popular residential solar option soon,” with one company president suggesting the technology could follow a growth curve similar to electric vehicles.