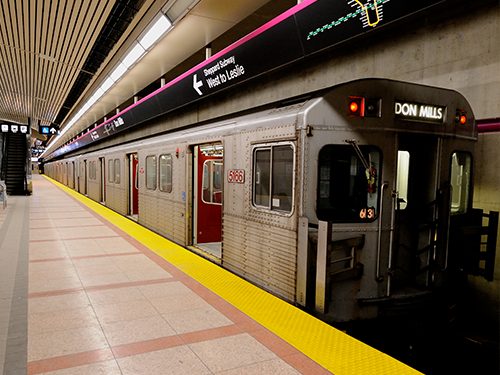 Toronto transit users can expect to return to a much-improved subway network once the COVID-19 pandemic begins to subside, after the Toronto Transit Commission took the opportunity to speed up its maintenance and upgrades to tracks, stations, and vehicles.

The two biggest improvements, the Toronto Star reports, are the installation of an automatic signalling system along one of the city’s major subway lines, and continuing removal of toxic asbestos in subway tunnels.

“The pandemic has decimated TTC ridership, and at its lowest point last April, passenger volumes dropped to just 14% of normal,” the Star writes. “Ridership is still only about 30% of what it used to be, and the agency expects boardings and fare revenue won’t return to pre-pandemic levels until after 2023.”

But as the impact of the pandemic became clear, the TTC seized the moment to speed up work on a maintenance backlog that was harder to clear while the system was operating at capacity. CEO Rick Leary “put out the call to all areas of the organization” for projects that could go ahead while ridership was down, said agency spokesperson Stuart Green, and “basically, any projects that could be done, have gone ahead.”

In normal times, crews can do intensive maintenance and repairs on the subway system when it’s closed, between 1:30 and 6:00 AM most days. “To get the work done, the TTC has instituted a significant number of weekend or early weeknight subway closures in recent years, which has frustrated riders,” the Star says.

“But with fewer transit users to inconvenience during COVID-19, the TTC has increased the number of closures, and extended them,” including its first-ever 10-day shutdowns of sections of its 38.8-kilometre Yonge-University line, known to locals as Line 1.

The new signalling system “is expected to significantly increase capacity on the normally busy subway” once installation is complete, and the sped-up schedule eliminated the need for 20 weekend closures spanning five months. Meanwhile, the accelerated maintenance schedule allowed the TTC to remove 50,000 square feet of asbestos as of mid-March, far above its earlier target of 15,000 square feet, replace 33,500 feet of subway track, compared to a target of 10,000 to 20,000, and advance a streetcar repair program by two years.

“We will always need weekend closures,” Green said, “but the number we immediately require will go down.”

With tunnel crews working at close quarters during a global health emergency, Green said the TTC supplies personal protective equipment and sets social distancing protocols. Carlos Santos, president of Amalgamated Transit Union Local 113, told the Star the union “closely monitors and ensures the TTC lives up to its health and safety commitments.” The paper says 640 TTC workers out of a labour force of about 16,000 had contracted COVID-19 as of April 1, and one had died.