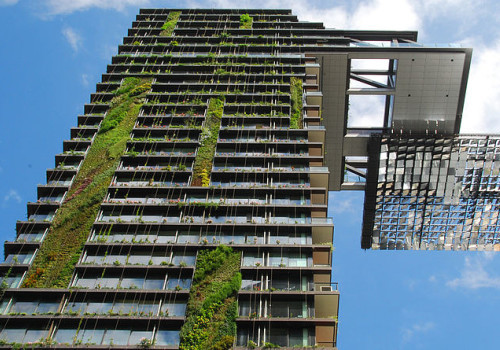 A group of architects in the United Kingdom is pointing to new building construction as the biggest unchallenged obstacle to a carbon-free future and calling out green building designers for the carbon footprint of their supply chains.

“It’s strange to see something described as ‘fossil fuel-free’ when it is made of concrete, steel, and glass,” Joe Giddings, coordinator of the Architects Climate Action Network (ACAN), told The Guardian. “The production of these materials entails burning a huge amount of fossil fuel.”

He added that “the climate emergency is not a game and we can’t just spin our way through it. We need to think about where our materials come from, how they’re made, and interrogate the whole supply chain—from construction to demolition and reuse.”

ACAN estimates the embodied carbon in a new building accounts for up to three-quarters of its lifetime emissions—and that proportion will only increase as a decarbonizing electricity grid reduces everyday use of fossil fuels. But while “much is made of the proposed energy efficiency of buildings once they are occupied,” writes Guardian architecture and design critic Oliver Wainwright, “so far very little attention has been paid to the carbon emitted in getting them built, and eventually dismantled—from extracting raw materials and manufacturing components, to the toxic byproducts of demolition leaking out in landfill.”

With the built environment accounting for 43% of the UK’s carbon emissions, he adds, “the embodied energy of construction has become the vital element to focus on.”

But construction emissions are an area where “government regulation is really lagging behind,” said architect Simon Sturgis, founder of the Targeting Zero carbon consultancy. “Over the next 60 to 70 years the most immediate problem will be construction emissions, and it’s something that is not even considered by the building regulations at the moment,” he told The Guardian. Yet “it is quite straightforward to address: very significant carbon reductions can be made for very little cost.”

The Netherlands has required a “whole life cycle carbon” approach to buildings since 2013, and The Guardian says Sturgis had a hand in a section of the new London Plan that introduces a similar requirement. “No targets have been set, but developers of big schemes referred to the mayor will now have to calculate the projected emissions of their proposals over their entire lifespan, including construction, demolition, and disposal, and show how they have tried to reduce the carbon consumption,” Wainwright writes.

Sturgis is critical of glass-walled office towers, particularly the exterior glazings that are only guaranteed for 30 years. “It’s about choosing things slightly more carefully,” he told Wainwright. “Using less concrete and more timber, or specifying recycled aluminium for window frames.”

As well, it’s “crucial to understand the relationship between improving operational emissions and the carbon costs of doing so. Triple-glazed windows might reduce heating requirements, but their embodied carbon is vast.”

The Guardian has more on UK building standards here.