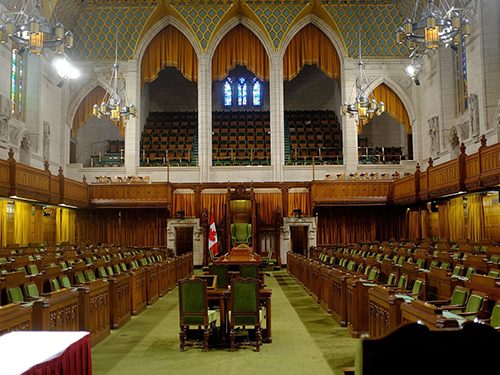 Five Canadian climate organizations are turning up the heat on all the parties in the House of Commons to advance the Net-Zero Emissions Accountability Act, Bill C-12, when Parliament resumes Monday.

They’ve written to the House Leaders of the five parties urging them “to use cross-partisan negotiation and all parliamentary tools at your disposal to ensure that Bill C-12 is sent to the environment committee” before the House refocuses on the federal budget April 19.

“The bill has been stuck in limbo for over four months and with the federal budget on the horizon, we are seriously concerned that it will not make it through the legislative process before the next election,” the groups said in a release yesterday. “Canadians expect and demand that parliamentarians work together to fulfill the mandate given to them by their constituents.”

CAN-Rac set the stage for the release with an April 1 tweet storm demanding that MPs get moving on C-12. Before it can go to committee for detailed study, the bill must pass Second Reading in the House. And it can’t be brought forward for a final vote until it’s been through committee.

“It’s time for MPs to get #BillC12 into committee,” CAN-Rac tweeted. “Politicians have an important job to do to review this legislation. No more wasting time.”

“It’s time for political unity on climate action,” said KAIROS Canada. “All parties must work together to make #BillC12 a pivotal law to fight the climate crisis.”

“Canada has missed every single one of its own climate targets,” Greenpeace Canada noted. “If politicians don’t work together to pass #BillC12, we risk missing our chance to reduce emissions.”

“The bill needs to be strengthened in order to keep government to account,” DSF said. “But we don’t want to go back to square one—let’s get #BillC12 to committee and strengthen it there.”

“MPs need to hurry up working to #StrengthenC12 and adopt this climate Bill in the House of Commons before a general election is called,” tweeted @dgscientifik.

“It’s time for MPs to get #BillC12 into committee,” added Ecojustice lawyer Julia Croome. “My son is 115 days old and I’m starting to worry he’ll be walking and talking before we make this country climate accountable.”

But “let’s be clear—it is currently too weak to be worth passing,” cautioned former federal Green leader Elizabeth May. “It must include a near-term target. 2030 is too late. #BillC12 must be rewritten to align to #IPCC 1.5 degrees. Let’s act like we understand #ClimateEmergency.”

The online activity drew support from NDP environment critic Laurel Collins. “Liberals said the Net-Zero #ClimateAccountability bill was a priority,” she tweeted. “But it was tabled 133 DAYS AGO and they refuse to schedule it to finish second reading. We can’t #StrengthenC12 unless it gets to committee. Join the twitter storm today! Tell govt to stop delaying #BillC12.”

Collins’ tweet quickly produced a response from Environment and Climate Minister Jonathan Wilkinson. “Need opposition support in Parliament to get it to committee,” he said. “We were disappointed our request to advance C-12 was rejected 3 weeks ago. We welcome today’s call from the NDP to advance it. Let’s work together to get it done.”

“Bill C-12 on net zero by 2050 is a top priority for the government,” added Government House Leader Pablo Rodriguez. “When the House returns, I’m looking forward to the NDP’s support to move forward quickly with this critical piece of legislation.”

CAN-Rac Policy Analyst Caroline Brouillette pointed to the week before the federal budget as an important but narrow window of opportunity for MPs to get C-12 past Second Reading and into hearings before the House Environment and Sustainable Development Committee. “The spirit of Bill C-12 and of climate accountability legislation is all parties working together with urgency to respond to the climate crisis, and we’re asking them to bring the same cross-party spirit and sense of urgency to adopt the bill at Second Reading,” she told The Energy Mix.

She pointed to the limited lifespan of a minority government and U.S. President Joe Biden’s climate leadership summit coming up April 22 as two factors adding to the urgency surrounding C-12.

“We understand the life cycle,” she said, referring to a sitting government that must rely on the support of other parties in the Commons to pass legislation. At the same time, “the only place we can make improvements to the bill is in committee, and with a minority government we have a great opportunity for parties to work together across the aisle as Canadians gave them the mandate to do.”