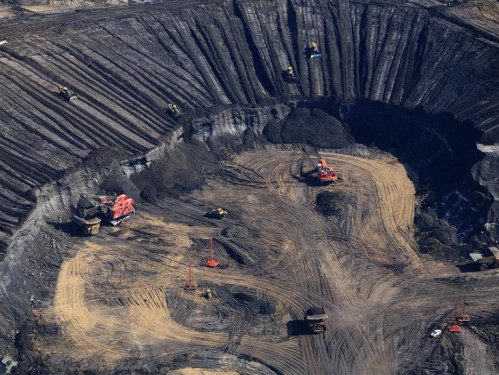 Canada’s biggest fossils aren’t considering a sudden pivot to renewable energy, but pipeline companies have no major expansion plans in the offing, judging by their remarks at a virtual symposium this week hosted by the Canadian Association of Petroleum Producers (CAPP) and Scotiabank.

CNRL President Tim McKay said his company had cut its production emissions 18% between 2016 and 2020, will release a new carbon-cutting goal in the second quarter of this year, and “sees carbon capture as a way to further reduce its environmental toll,” Reuters writes. But unlike some of the biggest European fossils, it is not planning major renewable energy investments.

“The preference is to stick with what we know and what we’re good at,” McKay said. “There’s going to be a need for oil long-term.”

“Where we’re likely to remain is focused on oil and gas production,” echoed Cenovus CEO Alex Pourbaix. “Don’t look for us to become a late-entrant renewable-power developer.”

Pourbaix cautioned investors to watch out for a “noisy” first quarter as his company sorts through the employee severance payments, executive buyouts, and other costs resulting from its takeover of Husky Energy.

Suncor Energy said it’s on track to cut its emissions intensity—its greenhouse gas emissions per barrel of bitumen it extracts—by 30% from 2014 levels by 2030, while ExxonMobil subsidiary Imperial Oil said it would stake its future on carbon capture and biofuel blends. “When it comes to wind farms and solar farms,” said Imperial Senior Finance VP Dan Lyons, “that’s not really in our wheelhouse.”

TC Energy said it’s looking for “organic bolt-on projects” that will build on its existing infrastructure, while counting on carbon capture and hydrogen to reduce its operating emissions, Reuters reports. “Transition can’t come fast enough from our perspective but we have to pace it appropriately,” CEO François Poirier told the fossil symposium. “I believe natural gas and liquids will continue to play a prominent role in the energy economy for decades to come.”

From that starting point, he added, “our existing assets will continue to be used and be useful for quite a long time and generate a tremendous amount of cash flow that we will be able to deploy into the energy transition.”

Monaco also said the regulatory obstacles and intense public pushback confronting new pipelines make his company’s existing system a boon for investors, CP says. “You’d think that makes pipe in the ground more valuable, and I think it will eventually, but the reason for that is it’s very difficult to replicate our asset base,” he said “And the reality is that in any energy scenario we can think of, our systems are going to be critical for a long time.”

Poirier and Monaco were both referring to pipeline systems intended to run for decades, not years, at a time when the plummeting cost of battery storage is gradually solving the problem of reliability and backup power for renewables. In response to the Reuters story, Greenpeace Canada Senior Energy Strategist Keith Stewart said the fossils’ stand-pat strategy won’t serve them well for very long.

“They will go the way of Blockbuster Video once Netflix arrived,” he said.