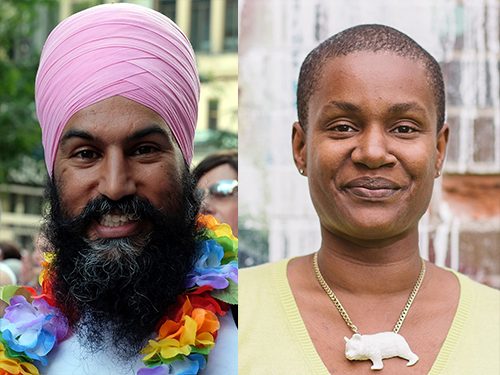 A “climate emergency alliance” between the New Democratic and Green parties could make as many as 80 more House of Commons seats available to MPs who support faster, deeper carbon cuts, 350 Canada contends in a new campaign aimed at the two federal parties.

But the “theoretical vote ceiling” in 350’s modelling depends on “a significant campaign to achieve these results in any given riding,” the national advocacy organization concedes, and on public surveys of Canadians’ past voting intentions that were compiled by province or region, but not broken down to the riding level.

The leading edge of the campaign is a petition calling on NDP leader Jagmeet Singh and Green leader Annamie Paul to “set aside your partisan differences” and “come together under the promise to do everything in your power to tackle the climate emergency at the pace and scale that science and justice demand. You would pledge to work together during the election to elect as many climate champions as possible, and afterwards in Parliament to pass ambitious climate legislation in line with a made-in-Canada Green New Deal.”

Such an alliance is needed, 350 adds, because “we can’t afford to wait for Justin Trudeau to start governing like we’re in a climate emergency. Nor can we wait several decades for the NDP or Green parties to build enough power to form government.”

In an opinion piece last week for Ricochet, 350 campaigner Cam Fenton said an NDP-Green alliance “can defeat Trudeau’s climate status quo”, even though the Liberal leader and his government currently poll well on climate policy.

“Our current political system is poorly equipped to deal with a crisis of this scale,” he writes. “Add to this political status quo a corporate mainstream media that refuses to cover climate change as the civilizational threat it is, and you’re left with the perfect recipe for the almost 75% approval rating that Trudeau seems to enjoy on this issue.”

To break through with voters, “we need to force climate change—and our government’s current level of inaction—to centre stage,” and “having two political parties in Canada set aside their differences to campaign together under the banner of a climate emergency alliance could do just that,” Fenton adds. “Candidates would be able to make headlines calling out Trudeau and the Liberal government’s failure to tackle the climate emergency. Pundits would be forced to provide mainstream coverage on Canada’s failure to meet unambitious climate targets and juxtapose their milquetoast ambitions against a new U.S. government that seems poised to far exceed our level of action.”

The riding-by-riding modelling behind 350’s campaign identifies 77 ridings where the NDP would have a better chance if the less popular Green candidate dropped off the ballot, and five where the Greens would fare better with the less popular New Democrat out of the picture.

But apart from the big difference in the potential gain for each party, the fine print behind the calculations might give election organizers for either of the parties pause: success in each riding depends not only on the Green vote going to the New Democrat or vice versa, but on large proportions of Liberal or Bloc Québécois voters switching to their second party preferences if an NDP-Green alliance declared climate action its priority.

“In 2019, 46% of Liberal voters considered voting NDP at some point in the campaign, and 29% considered voting Green,” Fenton writes for Ricochet. “On voting day, these voters cast a ballot for the Liberals.” But “a climate emergency alliance between the Greens and NDP would give both parties a chance to make major electoral gains.”

Yet those dynamics can vary widely among ridings, and even among individual polls within a riding. With no data available at that level of granular detail, 350 resorted to averaging the provincial and regional survey results published by three national pollsters—Ipsos, Ekos, and Léger.

“Unfortunately, parties in Canada tend not to publish riding-level polling, if they do it at all, which helps to create the opening for big, national strategic voting waves where people vote for the party most likely to win based more on national trends than local ones,” Fenton explained in an email to The Energy Mix.

“We hope this campaign, and the fact that so many Green- and NDP-accessible voters cast ballots for the Liberals, pushes parties to do more riding-level polling, release it, and use it to inform decisions, including standing down in ridings where they can’t win but could help a climate champion win with this Alliance.”

While Fenton couldn’t cite any past data on the proportion of voters who actually pivot to their second choice, he said the dynamics of an election race can make a major difference.

“Voters in Canada are not, by and large, strictly partisan, and will shift between parties based on a combination of who they think is best on the issues and has the best chance of winning,” he wrote, with their decisions often motivated by strategic voting to prevent a worse outcome. If the Greens and NDP can present “both the most ambitious climate platform and a clear case for having the best chance at winning, they can neutralize strategic voting and win these ridings.”