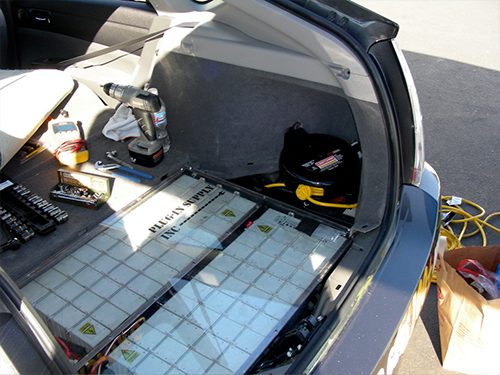 Biden administration officials gearing up to fund 500,000 fast-charging stations for electric vehicles might be better off investing in the mechanics of “battery swapping”, says an industry insider.

In a recent opinion piece for the Washington Post, Levi Tillemann, vice president for policy and international outreach at battery swapping company Ample Inc., urges the Biden administration to think twice about funding 500,000 EV fast-charging stations, arguing that such an endeavour will amount to pouring US$100 billion down the drain of a dying technology.

While Tillemann is hardly a disinterested party, he does present a detailed argument for why battery swapping may be the wave of the future.

First off, he claims, the process is “simple.” Empty batteries are removed and replaced by robots, “much as you would change the batteries in a flashlight.”

According to Tillemann, battery swapping is “already propelling the spread of scooters, electric rickshaws, and EVs throughout China and much of the world, even as we struggle to make less efficient charging technology succeed here in America.”

And, he writes, the EV industry is struggling to find its pace in the United States. That’s because many people, including “many low-income Americans who live in apartment buildings and park on the street,” just don’t have the ability to plug in overnight.

“And those who need to recharge quickly because they travel cross-country or drive for a living can’t spend precious hours just waiting around,” he adds.

Then there are the steep costs of installing fast chargers (anywhere from $50,000 to more than $300,000) and operating them, costs that make them “a much tougher business than gas stations,” he says.

Battery swapping has the potential to shine on the climate front, as well. “Because battery swapping stations are, in essence, large energy storage devices, they can capture and store intermittent solar and wind energy,” Tillemann explains. That makes the approach decidedly more climate-friendly than a fast charger which, unless it has battery back-up, “will rely on the grid to dispatch electricity on demand, and roughly 60% of that energy still comes from natural gas and coal” in the U.S.

And in Asia, battery swapping isn’t just growing in the scooter market. Chinese automakers “have also publicly announced plans for swap stations capable of refuelling well over 10 million cars per week, and they can already support about a million vehicles.”

But there are factors that are holding China’s EV swap station momentum back: the (big and expensive) robots that perform the swap are the same ones that “helped sink the now-defunct Israeli battery-swap company Better Place,” Tillemann says. An added drag: a lack of standardization across brands means that dedicated swapping stations need to be built for every make.

Noting that his own company now supplies Uber drivers in the San Francisco Bay area, Tillemann says the United States is well-positioned to take the lead on producing “smaller, cheaper, and much more flexible” battery swapping stations.

Sketching out the path to small, cheap, and flexible, he explains that Ample has replaced the hefty battery pack of the standard EV with “lots of smaller Lego-like batteries that can be easily stacked in various configurations”—and, therefore, in any make of car.

In a separate story, the Post writes that “President Biden’s ambitious plan to jump-start the U.S. electric vehicle market faces a roadblock: a weak supply chain that is making it difficult for American automakers to get enough batteries to scale up production.”

Of immediate concern is a dispute between two South Korean battery companies, SK Innovation and LG Energy Solutions. LG has accused SK of stealing trade secrets to build its battery production plant in Georgia, and the U.S. International Trade Commission (ITC) has agreed, “ruling that SK can make batteries in Georgia for only four years before it must essentially shut down its new plant.”

Simon Moores, managing director of London-based Benchmark Mineral Intelligence, worked with SK to study the U.S. battery market. He told the Post that “closing that factory would take 15% of batteries off the market this year and 8% in 2030, reducing U.S. capacity by more than 50,000 vehicles a year.”

The Post says Biden has until April 11 “to overturn the ITC ruling.”

In other recent automotive news, Reuters reports that two Democratic senators from California, Alex Padilla and Dianne Feinstein, have written to Biden urging him to set a firm end date for gas-powered car sales.