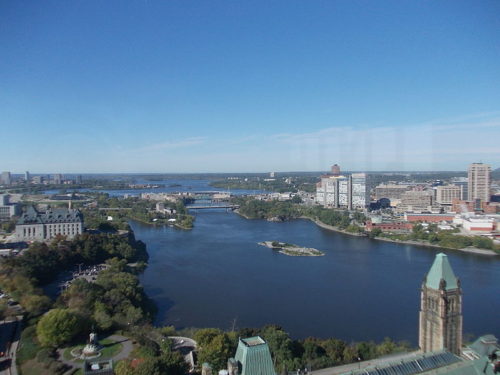 An Ottawa city council committee has stopped short of opposing plans for two new nuclear waste disposal sites less than 200 kilometres upriver, but will ask privately-owned Canadian Nuclear Laboratories (CNL) to refrain from accepting waste from outside Ontario and take steps to protect the Ottawa River, on which the community depends for its drinking water.

CNL, a private consortium led by engineering giant SNC-Lavalin, “wants to build a ‘near surface disposal facility’ at Chalk River to hold one million cubic metres of low-level solid nuclear waste,” the Ottawa Citizen reports. “Wastewater would be treated onsite before being released into the environment. The facility would have a life of 550 years.”

The site is located about a kilometre from the river, and has faced years of opposition over community health and safety concerns on both sides of the waterway, which forms a boundary between Ontario and Quebec.

“CNL also wants to complete decommissioning of the nuclear demonstration facility in Rolphton, ON, along the Ottawa River northwest of Chalk River, by filling and sealing the underground infrastructure with special grout,” CBC says. “The projects are subjects of separate federal environmental assessments. Several local governments, including Gatineau and Montreal, and First Nations have stated their opposition to the proposals.”

But not, apparently, the City of Ottawa. Last week, “Coun. Theresa Kavanagh originally wanted council to fight a proposed nuclear waste disposal facility upstream in Chalk River,” The Citizen says. But after nearly eight hours of public deputations last week, she “presented a replacement motion to the standing committee on environmental protection, water and waste management after city staff said the project could bring better protections for the Ottawa River.”

Afterwards, Kavanagh said the discussion was what mattered. “The fact that we’re paying attention as a city is very important,” she told media.

During the marathon committee meeting, city water quality engineer Ian Douglas told councillors the CNL plan was a “sound proposal from an engineering point of view”, and would better protect the river compared to the way waste is currently stored on the site.

“In principle, we feel the engineered facility, along with its wastewater treatment, does provide improved protection for the river,” he said. “The risks [to drinking water] from Chalk River, especially based on the track record, I think are low in terms of having a health impact for our residents.”

Even so, “city staff want CNL to ensure the project demonstrates a lower risk to the Ottawa River. They are also concerned about waste being imported to the facility from other Atomic Energy of Canada Limited (AECL) sites and protecting the river during demolition and waste transfers at the Chalk River complex,” The Citizen said. “Staff want CNL to issue prompt notification to the city of any spills into the river, hold regular tests of the notification system, and transmit timely data on the Ottawa River.”

The 30 or so community members who addressed the meeting had rather more visceral concerns.

“It’s really a landfill, and a landfill type of facility is not at all appropriate for these types of wastes,” said Ole Hendrickson, a researcher with the Concerned Citizens of Renfrew County and Area, who called the waste a “witch’s brew.”

The Citizen says CNL is receiving an estimated C$230 million to develop the waste facility on behalf of AECL, which owns the Chalk River site. Shannon Quinn, AECL’s vice-president of science, technology and commercial oversight, called the proposal a “science-based solution.”

She added that the federal government is currently carrying about $8 billion in liabilities for radioactive waste, “which it plans to deal with,” CBC writes.