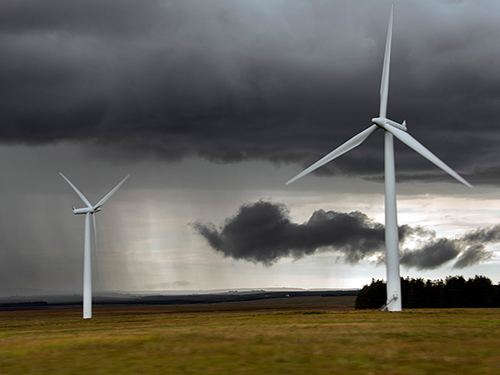 At hearings last week chaired by a climate change denier and green energy critic, the utilities committee of the Kansas Senate considered a measure to limit expansion of a wind energy sector that already supplies 41% of the state’s electricity, the second-highest share in the United States.

“Not only are we talking a taking of individuals’ private property rights,” said Kimberly Svaty of the Kansas Advanced Power Alliance. “We’re also talking about literally, by way of a piece of legislation, just washing our hands of billions of dollars, billions of dollars of potential investment over the next 10 to 20 years.”

Under the new bill, “turbines would need to be at least 1.5 miles from a home, three miles from an airport or park, and one mile from another person’s property line,” KSNT News reports. “There also couldn’t be more than one turbine per square mile,” and “the amount of shadows and noise could also be taken into consideration.”

The state wind industry “said they want to work with concerned Kansans, but a bill like this is already making some companies concerned about the future,” KSNT adds.

“To have the rug literally pulled out from underneath you, that should send a signal to all business and industry across Kansas, that maybe this isn’t the most stable place to do business,” Svaty said. “Because even if you’re successful, there could be some that are going to seek to derail you.”

In a state with 41 operating wind farms and three more under construction, the proposed legislation “would heap an unprecedented level of government regulation on Kansas’ thriving wind industry that in two decades attracted $14 billion in investment to a state economy struggling to find new opportunities for growth,” writes the non-profit Kansas Reflector. “Advocates of wind farms said Senate Bill 279 would prohibit growth of an energy resource celebrated by [Republican] Govs. Sam Brownback and Jeff Colyer and praised by Democratic Govs. Kathleen Sebelius, Mark Parkinson, and Laura Kelly,” while creating property rights issues “by retroactively muddling contracts signed as far back as 2011.”

“What it’s saying is, ‘In [the state capital of] Topeka, we want to decide what people can do in Ford County or Thomas County or counties throughout the state related to their own use of land,’” said attorney Alan Anderson, who represents energy developers. “It would completely remove your ability to use your property rights for wind energy development. Period.”

Reflector notes the state’s wind farms “haven’t arisen without controversy. At the county level, projects have been blocked or revised. It takes years, under the current system, to work through the regulatory process and complete agreements with landowners. Some people don’t want towering turbines and blinking lights in their line of sight. Others view turbines as an eyesore made more painful when the landowner profiting from the endeavour lives next door.”

Then there’s Republican Sen. and utilities committee chair Mike Thompson, a climate denier and alternative energy “skeptic” who worked as a TV weathercaster until 2018, then set up his own “academy” for climate and energy analysis and began pitching himself as a public speaker on the “climate change canard,” Reflector says. He was right in his element in February, suggesting that the devastating and deadly power outages in Texas were caused by renewables and that coal, nuclear, and natural gas generation would be the state’s “saviour”.

“While Thompson and other politicians pointed to frozen turbines or solar panels as causes of the disaster in Texas, investigators believe the primary issue was inadequately winterized natural gas facilities,” Reflector writes. “Federal regulators also warned a decade ago Texas power plants could fail in sufficiently frigid conditions. In addition, the decision by Texas to isolate itself from two national electric grids made it difficult on an emergency basis to funnel electricity there from Kansas and other states. The blackout disaster caused approximately US$195 billion in damage,” with a declared death toll that nearly doubled last week, to 111.