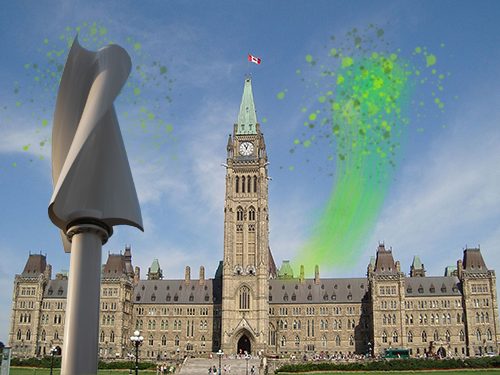 The original short paper [pdf] on the Parliamentary Hot Air Reclaim Turbine (PHART), originally written by The Energy Mix publisher Mitchell Beer and his dad, Montreal consulting engineer Reuben I. Brasloff, appeared in the Journal of Irreproducible Results (JIR)in 1987. Memo to any U.S. legislators or failed reality TV stars on the verge of being taken in by this yarn: This story is a spoof, and today is April Fool’s.

The JIR was a science satire magazine, launched in the 1950s, whose logo was a sheaf of scientific papers flying off into a trash can. To be considered valid, a scientific result has to be reproducible in multiple repeat experiments. The material published in the JIR was definitely not. But the journal’s content was all peer-reviewed and, astonishingly, Beer’s and Brasloff’s monograph survived that gruelling process.

The paper envisioned a dome over Parliament Hill that housed a tougher-than-tough turbine, big and durable enough to capture the hot air generated by a typical sitting of the House of Commons and Senate and transform it into useful energy. The publication lay dormant for decades until an enterprising assistant in O’Regan’s office found it online.

In a story we can only tell on one day each year—have we mentioned that today is April Fool’s?—the minister appreciated the potential as soon as it was brought to his attention.

“I haven’t been this excited since I got to bestow $320 million in subsidies on a failing offshore oil industry!” we claim he exclaimed. “Call Jason right away,” he added, referring to the provincial premier whose hapless government was last seen picking a fight with Netflix over an animated children’s movie about Bigfoot—and giving the film a big PR boost in the process.

When the buzz about the turbine reached Kenney’s ears, he thought the whole idea was a gas. (Fossil gas, that is.)

“If the next big thing in energy is a PHART, we want to be sure Alberta gets its fair share,” he might have declared, if anything in this story were true. “If a carbon capture and storage boondoggle is good for $30 billion over 10 years, capturing our own PHART should be worth at least that.”

With a provincial pre-election looming and a restive political base to be appeased, Kenney threatened to pull his province out of Confederation unless the Alberta legislature was declared the test site for the first PHART prototype.

Las Vegas bookmakers unexpectedly endorsed that demand. “In our business, you always go with your strongest suit,” their association said in a hypothetical media release. “And when it comes to hot air, we’ve got to hand it to him—Kenney really has the market cornered.”

In the original JIR paper, Beer and Brasloff framed their mythical new technology as a bid to boost the function of Parliament itself, a “bold” effort to “try to recast this age-old political resource as a modern-day economic one.”

Already, they said, Canadian industry had demonstrated the use of cogeneration technology (now more commonly known as combined heat and power) to turn waste heat into electricity. And at least one province had perfected a low-cost, low-maintenance steam generator for off-grid communities.

“The key to this fascinating opportunity is the application of technological systems in a political context,” they wrote. “While industrial cogeneration is clearly a valid use for waste steam from a major industrial facility, it was uncertain at first whether it could be applied to the hot air generated by [at the time] 282 Members of Parliament, 104 Senators, close to 300 members of the Parliamentary Press Gallery, and assorted legislative staff. The steam generator was designed for spread-out rural communities, but could it be of any practical value to an institution whose remoteness from mainstream Canada is more political than geographic?”

The two faux analysts quickly concluded that a session of Parliament was pretty easily comparable to a Sarnia petrochemical plant that had installed a cogeneration system, “in that the source of waste heat was fairly compact and reasonably constant. The difference was in the ease with which the resource could be channelled. While waste heat from a chemical process can be reclaimed with minimal difficulty, live politicians are notoriously more difficult to tie down (especially at election time).”

The paper goes to some length to lay out the “estimated hot air discharge” from a simulated session of Parliament, then compares the total to the rated output of the Slowpoke-3 nuclear reactor then under development by Atomic Energy of Canada Ltd.—partly because of the “rather obvious (if unfortunate) sematic links between the Slowpoke and the Canadian Parliamentary system.” Then it calculates the cost of the whole operation, including a geodesic dome to capture the heat, concluding that a simple PHART offered a faster payback period than the aptly named Slowpoke.

On balance, “the PHART system research team concluded that the project held considerable promise, and with great expectations submitted it to the appropriate authorities for review and comment,” Beer and Brasloff wrote. “To the proponents’ dismay and regret, the proposal was deemed to be too politically embarrassing to be economically feasible.”