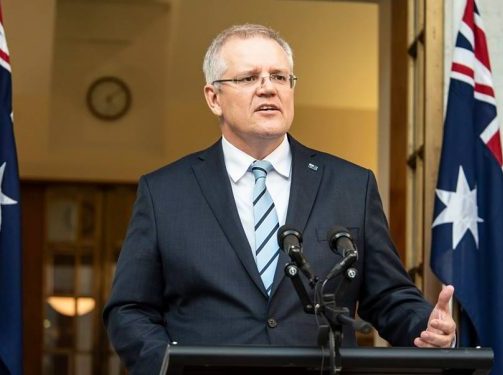 The Biden administration is expected to announce new and tougher 2030 climate targets when the U.S. plays host to a global climate leadership summit a few weeks from now. Australia’s government, on the other hand, will be doubling down on climate negligence, spinning distortions about past efforts to justify its ongoing lack of ambition.

In a recent call with U.S. special climate envoy John Kerry, Australian Prime Minister Scott Morrison’s words revealed that his newly-asserted commitment to helping the world shift to net-zero is a hollow thing, relying on “dodgy stats to maintain the façade that Australia is pulling its weight on climate change,” writes RenewEconomy.

A recent release by the Australian PM’s office (PMO) described the call with Kerry as a “constructive” exchange, confirming that “the U.S. and Australia will work together on technological advances that can enable us to address climate challenges and the transition to a new energy economy.” But RenewEconomy isn’t buying the rhetoric.

“Even the use of the term ‘new energy economy’ is a form of marketing spin, allowing the prime minister to appear to be embracing a ‘clean’ energy transition, while not ruling out the continued use of fossil fuels.”

The publication also points to Morrison’s determined effort to promote Australia’s (decidedly underwhelming) historical efforts to fight the climate crisis as sufficient, to excuse it from stepping up for the necessary emissions cuts now.

“Australia’s strong record of meeting and beating our emissions reduction targets was recognized, noting we have reduced emissions by 19% since 2005—our benchmark year under the Paris Agreement—far exceeding the OECD average and many other advanced western economies,” the PMO wrote.

RenewEconomy also flagged Morrison’s assertion that “the climate discussion must importantly focus on what nations are achieving in emissions reductions to date, not just future ambition.”

“That climate policy negotiations should focus on past actions is a rather extraordinary suggestion,” RenewEconomy opines, “as past efforts to reduce emissions means very little in the context of climate change, particularly when the world is not on track to limit global warming to safe levels.”

An earlier RenewEconomy post digs into the details of Australia’s claim that its current 2030 emissions targets are among the best in the world—a ranking touted by former finance minister, notable climate denier, and now incoming OECD Secretary General Mathias Cormann. It says the assertion rests significantly on the sleight-of-hand replacement of absolute emissions reductions (the standard) with far more murky per capita and energy intensity measures.

“The reason a percentage change of Australia’s per capita emissions looks so great on a global stage is that Australia is starting from the absolute worst position on that metric,” RenewEconomy explains. So while a 50% drop in per capita emissions since 2005 appears steep, the country’s carbon pollution will still remain “far higher than many other countries in 2030.”

Renew Economy says Climate Action Tracker pans the Morrison government’s suggestion that it might seek to meet its 2030 Paris Agreement targets “by using carryover surplus emissions units from the Kyoto Protocol”—a measure that would allow the country to get away with significantly smaller carbon reductions.

In tandem with asserting that its 2030 reduction targets are world-class, Australia is also beating the drum hard on carbon capture and storage, part of a suite of technological fixes the country hopes to pursue in lieu of actual emissions cuts.