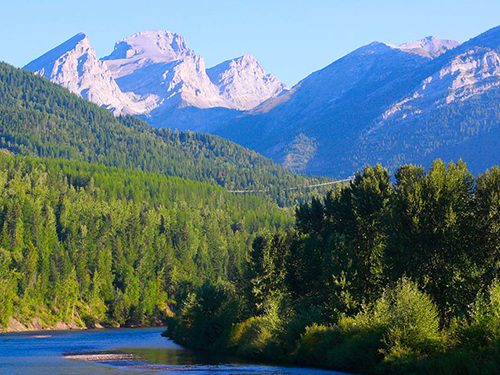 Teck Coal is facing the largest fine ever imposed under the federal Fisheries Act after pleading guilty to contaminating waterways in southeastern British Columbia.

The company, a subsidiary of Vancouver-based Teck Resources, is to pay C$60 million after a judge on Friday agreed to a joint submission from Environment Canada and the company, The Canadian Press reports.

“Teck did not exercise all due diligence to prevent the deposit of coal mine waste rock leachate into the Fording River from settling ponds,” federal prosecutor Alexander Clarkson, reading from an agreed statement of facts, said in B.C. provincial court.

Coal has been mined in B.C.’s Elk Valley for decades. Teck Coal purchased the mines in 2008.

By then, court heard, there was already 2.2 billion cubic metres of associated waste rock in piles as high as 100 metres.

The rocks leach selenium and calcite.

Essential to life in small doses, the element selenium in large amounts can cause fish deformities and reproductive failures. Calcite is a mineral that destroys the habitat that trout need to reproduce by coating stream bottoms.

“Prior to 2009, Teck Coal was aware selenium and calcite could be environmentally harmful,” Clarkson said. “Teck Coal did not have a comprehensive plan to address the deposit of coal mine waste.”

Environment Canada investigators found in 2012 that selenium concentrations were as high as 90 micrograms per litre in the Fording River and up to 177 micrograms in settling ponds at the mines. Both figures are many times higher than levels considered safe for river ecosystems.

Upstream of the mines, selenium concentrations were about one microgram per litre.

In 2020, investigators concluded Teck hadn’t done enough to fix the problem and issued charges in October.

The Fording River and other streams in the area are home to westslope cutthroat trout, a native species considered endangered. By 2020, Teck’s own research showed those fish populations had almost collapsed.

Vickie Thomas of the local Ktunaxa First Nation said her people continue to use and value the area. But the contamination has taken a toll.

“Knowing that fish habitat is impacted by these polluted waters leads to concern for the safety of all the fish as well as for Ktunaxa,” she said in court. “The result is an alienation of our people from our lands and waters.

“Fish and fish habitat are critical to the maintenance of Ktunaxa rights,” she added. “The ability to drink confidently from a mountain stream is an aspect of Ktunaxa rights that all future generations should enjoy.”

Teck Coal told court it has spent nearly $1 billion since 2011 in an effort to bring selenium under control and plans another $655 million in spending over the next four years.

It said it has expanded and upgraded water treatment facilities that can handle up to 20 million litres of water a day and remove 95% of the selenium.

“To the Ktunaxa First Nation…and to our communities in the Elk Valley, we deeply regret these impacts and we apologize,” said an open letter from Teck Resources President Don Lindsay.

“You have my commitment that we will not waver in our focus on addressing this challenge and working to ensure that the environment is protected.”

Almost all of the fine, $58 million, is to go to the federal Environmental Damages Fund to support projects that benefit the environment. The remaining $2 million is to go to general revenues.

Teck Coal must also remove selenium before it reaches the Fording River and follow requirements on water diversions, mine planning, fish monitoring, and calcite prevention.

Lars Sanders-Green of Wildsight, an environmental group that has been following the issue, pointed out that Teck Coal has taken billions of dollars out of the Elk Valley.

“What Teck and other mining companies have learned is not to worry about Environment Canada,” he said.

Sanders-Green said most of the water that flows through the mines is untreated and passes through old piles of waste rock that aren’t part of the new system. He noted that Americans are growing increasingly impatient with Canadian regulators allowing selenium to enter water that flows into the United States.

Sanders-Green wonders what will happen when coal mining ends.

“We’re putting a Band-Aid over it with water treatment,” he said. “If Teck’s spending a lot of money every year to operate a water treatment plant, there’s no way they’re going to continue doing that once the coal’s gone.”

This report by The Canadian Press was first published March 26, 2021.