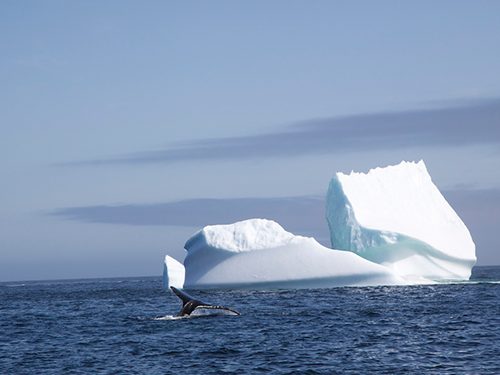 The sea ice was five weeks late to arrive along the north coast of Labrador this year—and is still 85% shy of its typical thickness. The Inuit communities that rely on that ice are rallying as best they can under conditions that pose both immediate dangers and long-term peril.

Fierce rainstorms and the warmest temperatures on record in January were a “climate curveball” thrown at the village of Makkovik early this year, writes CBC News. Temperatures in January averaged 10°C above normal.

And now, when the sea ice along the coast should be at its thickest (about one metre), at a mere 15 centimetres it is a fragile fraction of its healthy norms.

“The late and meagre ice this year has been the talk of Makkovik and the four other communities that comprise Nunatsiavut, the self-governing territory of Labrador’s Inuit—along with the Innu village of Natuashish, which lies on the north coast between Nain and Hopedale,” writes CBC.

The state of the sea ice is on everyone’s lips because essential activities like hunting and firewood collecting cannot happen if the ice is too thin to bear the weight of a snowmobile. Sea ice roads are also the only reliable connection between communities once ferries stop running in the fall, as air travel is frequently grounded by weather.

“The ice is our highway, and when that gets disrupted, so does life on the north coast,” said Barry Andersen, head of Makkovik’s community government.

Restricted in their movements, hunters are coming back empty-handed, leaving families depending more and more on non-traditional, and often unhealthy, store-bought foods.

The thinning ice is also a threat to a profound, and irreplaceable, spiritual connection. “It reminds you of who you are, where you came from,” said Charlotte Wolfrey, the community government head of Rigolet, Nunatsiavut’s most southern community. She told CBC the loss of the ice makes her fear for the future of her grandchildren.

“All those good things that kept us healthy and well, and kept us who we are, and kept us grounded, are not going to be available, I don’t think, to our next generation,” she said.

In a recent study for Environment Canada study, Way found that Nunatsiavut now regularly sees “almost 40 fewer days of snow on the ground” than it did in the late 1950s, and that the region’s northernmost parts are losing sea ice more rapidly than anywhere else in the Canadian Arctic.

The people of Nunatsiavut are trying valiantly to adapt to their melting world with efforts like the SmartICE (Sea-ice Monitoring and Real-Time Information for Coastal Environments) initiative, which combines high-tech data sensors and radar satellites with Indigenous knowledge about weather and ice conditions to help locals map safe routes across the ice.

But the ultimate fate of Labrador lies in the hands of world leaders far away. “If things don’t go well with mitigation, then things might be not heading in a good direction,” Way said.

Even if the world manages the necessary heavy lifting on the mitigation front, communities like Makkovik will nonetheless face profound, and devastating, change. Citing a United Nations study from March 2019, CBC writes that the Arctic is “locked into a three-to-five-degree warming scenario regardless of any mitigation measures for global greenhouse gas emissions.”