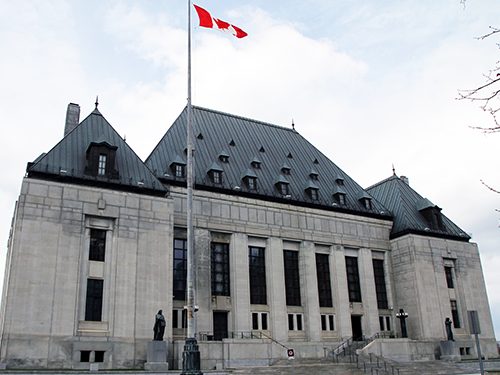 The Supreme Court of Canada has brought an end to years of provincial legal challenges to a key cornerstone of federal climate policy, deciding by a 6-3 vote that the Trudeau government’s carbon pricing regime is constitutional.

The ruling, released Thursday morning, is “a major decision that allows Ottawa to push ahead with its ambitious plan to ensure every province and territory has a price on carbon to curb greenhouse gas emissions,” CBC reports. The justices’ response to a constitutional challenge by Alberta, Saskatchewan, and Ontario was based in part on the severity of the climate crisis the carbon pricing system is meant to help address.

“Chief Justice Richard Wagner, writing for the majority, said the federal government is free to impose minimum pricing standards because the threat of climate change is so great that it demands a coordinated national approach,” CBC says. “He agreed with the federal government’s argument that climate change is a pressing matter of national concern and said it’s constitutionally permissible for Ottawa to take the lead on a threat that crosses provincial boundaries.”

On that basis, “Wagner found that Ottawa can act under the Constitution’s ‘peace, order and good government’ clause, better known as POGG—which gives the federal government authority to enact laws to deal with issues that concern the entire country.”

In their ruling, the majority of the judges “noted that national concern is a well-established but rarely applied doctrine of Canadian constitutional law,” the Supreme Court website states. “The application of this doctrine is strictly limited in order to maintain the autonomy of the provinces and respect the diversity of confederation. However, the federal government has the authority to act in appropriate cases, where there is a matter of genuine national concern and where the recognition of that matter is consistent with the division of powers” between federal and provincial government.

In this case, “climate change is real,” Wagner wrote. “It is caused by greenhouse gas emissions resulting from human activities, and it poses a grave threat to humanity’s future.” If the federal Parliament were blocked from addressing emissions in any way, “irreversible harm would be felt across the country,” especially in communities and regions most vulnerable to climate impacts.

In the immediate aftermath of the decision, Premier Jason Kenney said he would consult with Albertans and with allies in other provinces on what to do next.

“While we are disappointed with this decision, we have to respect that it is the majority decision of the Supreme Court of Canada,” he told a news conference. “We will continue to fight to defend our exclusive provincial power to regulate our resource industries,” he added, and “the best we can hope for is that the Supreme Court has invented a one-time-only carbon pricing exception to the constitutional order.”

Climate organizations across the country stressed the powerful precedent in the judges’ ruling.

“This landmark decision comes after years of hard-fought litigation, which culminated in a Supreme Court of Canada hearing last fall,” Ecojustice Executive Director Devon Page wrote in a message to supporters. And “today’s ruling sends a clear message: It’s time for the provinces and their premiers to stop politicking about climate action, and start taking actual steps to address this emergency.”

He added that “our experience working on this case has reinforced our conviction in the power of the law to make change and build a healthier, safer future for us all.”

“The Supreme Court of Canada dropped a love letter to the planet with today’s favourable ruling on the constitutionality of Canada’s carbon pricing law,” said Climate Action Network-Canada Executive Director Catherine Abreu. “This historic ruling sends a clear message that the Canadian Constitution cannot be used by laggards to delay and deny climate action.”

The climate crisis “is a matter of national concern,” Abreu added, and “it’s time for every order of Canadian government to stop partisan politicking and come together in a spirit of cooperative federalism on this critical issue.”

“Carbon pricing has taken up lots of oxygen in the Canadian policy debate for the last few years,” understated Dale Beugin, research and analysis vice president at the Canadian Institute for Climate Choices. “Now that one of the major arguments against a nationally consistent carbon price has been dismissed, it’s time to take a deep breath—and turn our attention to making carbon pricing work even better on the way to net-zero.”

“With this ruling, there is no longer any credible reason for provinces that launched the legal challenge against carbon pricing—Alberta, Ontario and Saskatchewan—to delay the creation and implementation of strong provincial climate plans that drive down emissions in line with Canada’s 2030 and 2050 targets and attract investment in decarbonization to enable the provinces to compete in a carbon-constrained global economy,” said Isabelle Turcotte, federal policy director at the Calgary-based Pembina Institute. “As the ruling noted, ‘a provincial failure to act directly threatens Canada as a whole’.”

Clean Prosperity Executive Director Michael Bernstein said the ruling means it’s time for conservatives to embrace carbon pricing. “With carbon pricing here to stay, Conservative leaders—both federally and provincially—should use this moment to think creatively about conservative versions of carbon pricing,” he said. “After all, carbon pricing is the lowest-cost way to reduce emissions, and the only climate policy that generates revenue that can be used to compensate households.”

“The Government of Saskatchewan chose to initiate this time-consuming, costly court case instead of crafting a carbon pricing policy that best fit this province’s needs,” said Saskatchewan Environmental Society Executive Director Allyson Brady. “Evidence of the effectiveness of carbon pricing is extensive and was largely undisputed in this court case. We are happy to see that the Supreme Court of Canada has ruled in favour of a decision that enables the federal and provincial governments to act cooperatively on reducing our greenhouse gas emissions.”

“The constitutionality of the carbon pricing law was previously upheld in Ontario and Saskatchewan. And it is not surprising that the Supreme Court of Canada has agreed with these lower court rulings,” added Keith Brooks, program director at Toronto-based Environmental Defence. “The challenge from the provinces was a complete waste of millions of taxpayer dollars, and a distraction from the urgent need to fight climate change.”

The climate crisis “is already causing flooding, forest fires, heat waves, deaths, and billions of dollars of damage in Canada,” Brooks added. “Indeed, the Supreme Court affirmed that climate change is ‘an existential threat to human life in Canada and around the world.’ Canadians want their governments to take action, and the courts have now conclusively affirmed that the federal government has the power to do so. With this case behind us, we hope our provincial and federal governments can work together on this and other necessary programs to develop a low-carbon future.”

The Smart Prosperity Initiative is hosting a free event at noon today to unpack the Supreme Court decision and its implications.

Plants will be hit as a warming world turns drier