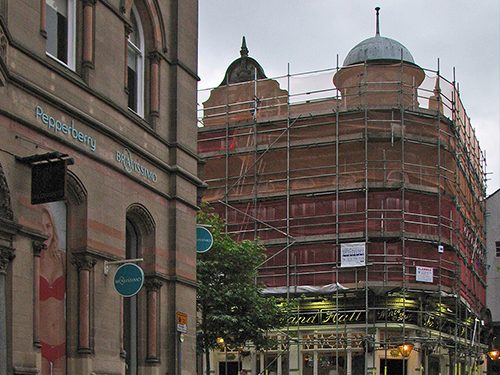 For the first time in its 46-year history, the most prestigious award in architecture has gone to a firm that has devoted three decades of work to retrofit and refurbishment, rather than new construction.

The US$100,000 Pritzker Prize win by Paris-based Anne Lacaton and Jean-Philippe Vassal “has shaken up the architectural profession and signals a remarkable shift in priorities among the world’s best city-makers,” writes Phineas Harper, director of the UK charity Open City, in an opinion piece for The Guardian. “If embraced more widely, this could transform how buildings everywhere are regenerated.”

“Lacaton & Vassal have proposed an adjusted definition of the very profession of architecture,” the Pritzker jury said. “The modernist hopes and dreams to improve the lives of many are reinvigorated through their work that responds to the climatic and ecological emergencies of our time, as well as social urgencies.”

Their work, the jurors added, is “as strong in its forms as in its convictions, as transparent in its aesthetic as in its ethics.”

As a profession, architecture “is typically obsessed with newness,” Harper says. “A seemingly endless parade of industry awards shower gleaming new buildings with plaudits and praise. Like contemporary art, architecture thrives on the idea of originality, devaluing work that seems derivative. This thirst for novelty produces some innovative buildings, but it also results in numerous shiny baubles that appear principally designed for Instagram feeds.”

By contrast, “the humble and unphotogenic work of refurbishing, repairing, maintaining, and upgrading existing buildings is rarely celebrated among city-making professionals,” Harper adds. Despite efforts to bring refurbishment closer to the forefront, “awards routinely go to new buildings of questionable merit, even while older outstanding estates and community facilities are neglected.”

“When you go to the doctor,” Vassal said, “they might tell you that you’re fine, that you don’t need any medicine. Architecture should be the same. If you take time to observe, and look very precisely, sometimes the answer is to do nothing.”

“Demolishing is a decision of easiness and short term,” Lacaton added. “It is a waste of many things—a waste of energy, a waste of material, and a waste of history. Moreover, it has a very negative social impact. For us, it is an act of violence.”

For the two architects, those attitudes have been the foundation for a 30-year career devoted to finding the most economical way to intervene on an architectural project. “In an age of demolishing public housing and replacing it with shiny new carbon-hungry developments in the name of ‘regeneration’, Lacaton & Vassal have worked tirelessly to expand and upgrade existing buildings with surgical precision, transforming the lives of thousands of people in the process,” Wainwright writes.

“From social housing to contemporary art centres, they always begin with a forensic assessment of what is already there, and how it could be improved with a minimum of resources,” he adds. “They prefer spreadsheets to slick computer-generated images, stretching shoestring budgets and using simple, off-the-peg materials with elegant economy, to ‘make more and better with less’.”

Wainwright says Lacaton & Vassal’s “fiercely pragmatic approach” shows up best in their work on public housing in Paris and Bordeaux, France, with design approaches that ended up “enlarging the flats and drastically improving their environmental performance. In the early 2000s, when the French state was allocating €167,000 for the demolition and rebuilding of each apartment, they argued that it was possible to redesign, expand and upgrade three flats of the same size for that amount. And they proved it,” with an approach that upgraded the units and doubled their size at a cost of €65,000 each.

Harper traces the more common scenario, in which “precious buildings that serve valuable community roles” are far too often demolished. And he points to the “disastrous environmental consequences” of needlessly demolishing and rebuilding.

“Constructing almost anything requires vast amounts of energy,” he writes. “While new buildings can now be made very energy-efficient, the materials and processes required to construct them in the first place generate such high emissions that the net impact of new buildings is often arguably worse than building nothing at all. It’s a carbon Catch-22—existing British buildings are not energy-efficient enough to be sustainable, but knocking them down and erecting new ones will also emit more carbon than we can afford.”

To that impossible trade-off, “Lacaton & Vassal’s Pritzker win hints at a solution,” Harper adds. “The key to bringing the environmental impact of architecture in line with planetary limits is to dramatically improve the energy efficiency of existing buildings while radically reducing new construction. In other words: less demolition, more refurbishment.”