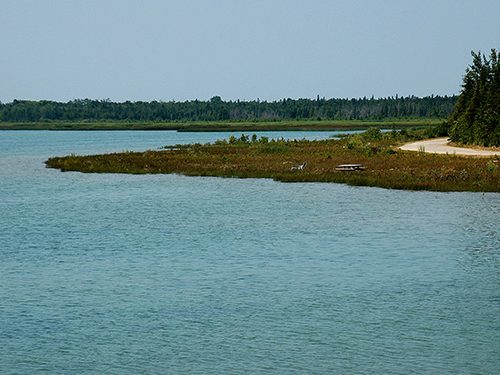 In announcing its “non-negotiable” opposition to the closure of the Enbridge Line 5 pipeline, the Canadian government has seemingly kicked to the curb a longstanding cross-border commitment to protect the Great Lakes from harm, says an experienced U.S. advisor.

Canada’s rhetorical sabre-rattling on Line 5 goes very much against the spirit of the International Joint Commission (IJC), a Canadian-American organization that for well over a century has advised federal policy-makers on both side of the border on how best to manage and protect the shared bounty of the Great Lakes, writes former IJC chair Lana Pollack in a recent op-ed for the Toronto Star.

Canada’s position that it’s “Line 5 or bust” also goes against well-established facts about what will happen if—when—the pipeline literally busts open under the Straits of Mackinac, Pollack says.

And it is only a matter of time before that happens, she adds: “The danger of a breach of this age-compromised pipeline spanning a major shipping lane in the world’s largest freshwater body increases with every passing day.”

Although Pollack makes clear that she writes as a private citizen, she does invoke her nine years as head of the IJC—an entity whose advice was, and remains, “invariably based upon science and thoughtful negotiations.”

In light of that history, she says, she would expect both countries to acknowledge certain facts. First in that lineup? That examination of Line 5 “shows thinning of the pipeline walls and a history of breaks in the lakebed anchors essential to keeping the pipeline tightly fixed to the lake bottom.” Further, she adds, “a current jury-rigged system of bottomland attachments allows this bent and corroded pipeline to flex and float in ways it was never designed to tolerate—stresses that intensify the risk of a breach.”

And then there’s the evidence that establishes Enbridge as a decidedly poor custodian of the health of the Great Lakes, most appallingly the “massive” 2010 Line 6B rupture into the Kalamazoo River that flows into Lake Michigan. Less apocalyptic but no less dismaying have been serial failures to report when the pipeline has been damaged by ships dragging anchors through the straits, plus the cumulative 4.2 million litres already spilled into the watershed by small line breaks.

Acknowledging the economic drivers behind Canada’s position on the Line 5 closure, Pollack writes sympathetically of hard days ahead for economies “reliant on dying markets for internal combustion engines and carbon-dependent electricity.”

But “only harm can come in trying to avoid difficult adjustments by denying reality,” she adds: That due to the climate crisis and its attendant policy, technological, and market responses, Line 5 “will be out of business within a decade.”

The “elephant-in-the-room question,” Pollack concludes, “is whether Michigan’s order will force Enbridge to close this pipeline before it ruptures, or whether the company will use the courts to frustrate and delay so long as to pump its final thousands of barrels of Line 5 petroleum products into the Great Lakes, where it will remain for generations to come.”