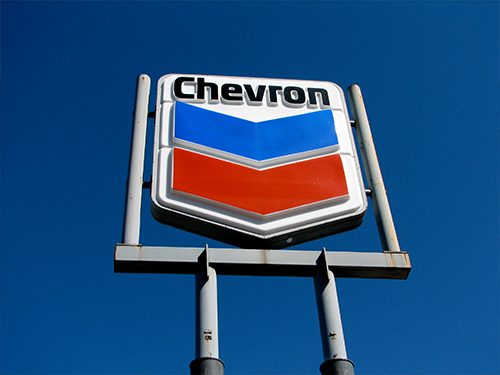 A complaint filed against Chevron for deceptive advertising could mark a new strategy for fossil fuel opponents.

On March 10, when the California-based colossal fossil announced its climate plan on Twitter, the backlash was immediate, writes Grist. Twitter users panned the plan as hypocritical, peppering the fossil giant with facts about past and present actions that showed the company to be a polluter of mammoth proportions.

Hard on the heels of this public offensive came environmental groups Earthworks, Global Witness, and Greenpeace USA. In response to the fossil giant’s tweets about investing in renewables and low-carbon technology, the associations have come together to file a complaint against the company with the U.S. Federal Trade Commission (FTC).

“It’s certainly not the first time a fossil fuel company has been accused of greenwashing, but it is the first time an FTC complaint has been leveraged as the legal avenue to do so,” writes Grist.

The filing “takes aim at the millions of dollars Chevron has spent on marketing campaigns to paint itself as climate-friendly, despite dedicating only 0.2% of its spending between 2010 and 2018 to low-carbon energy sources,” Grist explains. The plaintiffs are also calling out the fossil’s bait-and-switch technique of promising to reduce “emissions intensity” while having no plans to reduce its emissions overall.

In their filing, the groups demand that Chevron “remove misleading advertisements and publicly correct the record.” While victory is not certain, there is precedent, Grist notes: “Last year, BP withdrew advertising in the UK in the wake of a similar complaint” filed by legal charity ClientEarth.

The latest action against Chevron complaint is based on the argument that the company has contravened the FTC’s Green Guides, which were put in place to prevent companies from pulling green wool over the eyes of consumers.

Last updated in 2012, the Green Guides themselves are due for an overhaul, said Michael Burger, executive director of Columbia University’s Sabin Center for Climate Change Law.

Noting that companies have grown more savvy in their green-speak, Burger told Grist that stricter guidelines are needed for terms like “climate-friendly” and “net-zero.” He added that the FTC should also make clear that companies whose balance sheets remain heavily dedicated to fossil fuel investment cannot simultaneously market themselves as “clean energy innovators.”