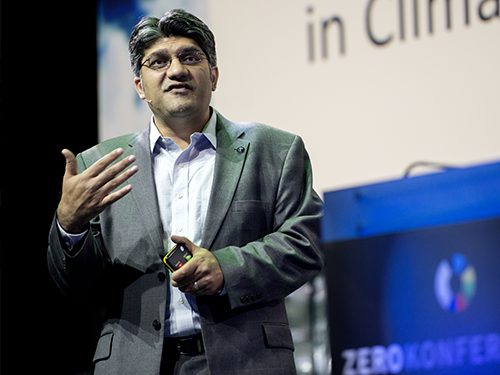 The Biden administration is reactivating a US$40-billion loan office left on hold in the years since the Obama presidency, with pioneering cleantech entrepreneur and investor Jigar Shah at the helm and a mandate to capture a share of a $23-trillion global market for low-carbon technologies—along with a simultaneous appetite for research on fossil and nuclear technologies.

“I am ready to rev those engines back up so that we can spur the next generation of innovation and deployment,” Energy Secretary Jennifer Granholm told the fossil industry’s big CERAWeek conference earlier this month. “We’re ready to invest in advanced vehicles, carbon capture, advanced reactors, and so much more.”

Granholm was referring to the Loan Program Office “that disbursed billions of dollars in loan guarantees to companies such as electric car maker Tesla and the failed solar company Solyndra,” The Associated Press writes. “The loan program helped launch the country’s first utility-scale wind and solar farms as part of the Obama administration’s efforts to create ‘green jobs’ but largely went dormant” during the Trump years.

In spite of the avalanche of negative publicity the Solyndra investment produced, Bloomberg Green reported last year that “Tesla wouldn’t be Tesla” if not for the early support it received—and the Solyndra loan was one of the office’s few unsuccessful efforts. The talk at the time was that the upstart solar company only failed because it didn’t anticipate how quickly the rest of the renewables market would mature, leaving it too little time to commercialize its own innovative design approach.

Last week, Utility Dive elaborated on the U.S. government’s plans for the loan program, citing Granholm’s remark that DOE plans to “double down” on research and development to make electric vehicles easier to produce and deploy. The administration “is aggressively pursuing transportation electrification not just because of its potential to curb greenhouse gas emissions and address climate change, but also to prevent China from cornering a burgeoning US$23-trillion market in carbon-reducing technologies,” the industry publication said, quoting Granholm’s talk to a virtual event hosted by Securing America’s Future Energy (SAFE).

With 142 lithium-ion battery megafactories under construction worldwide in 2020, 107 of them in China, “SAFE has estimated China controls nearly 70% of global EV battery manufacturing capacity, and North America has less than 10%,” Utility Dive adds. “The group advocates for emissions-free transportation policies, and has published research showing the United States could create 647,000 jobs within the next five years by aggressively growing the EV market and securing the electric transportation supply chain.”

With that in mind, “governments have to get in the game—at least the United States does, or we will be run over,” Granholm said. With the U.S. aiming for a net-zero carbon economy by 2050 and a zero-carbon grid by 2035, “there is a huge sense of urgency in getting these solutions out the door.”

In his final episode as co-host of Greentech Media’s Energy Gang podcast, Shah talked about the challenge he’s taking on as head of the DOE Loan Program Office. “I’m not kidding when I say I’m more terrified than excited” at the responsibility, he said. But while a program that backs start-up technologies is bound to have failures as well as successes, he noted that the LPO “has made money for taxpayers” with its investments to date, while issuing “many, many loan guarantees for wind and solar projects in 2009 [and] 2010 when, frankly, Wall Street did not believe that wind and solar projects were bankable.”

That confidence finally began to show up in 2014, Shah added, for two renewable energy technologies that now account for the lowest costs and highest growth rate for any form of electricity, in the U.S. or around the world.

“My sense is that we need to build 100 more of these bridges for technologies we all think are mature but aren’t being treated that way,” he said. “There are many areas that are mature from a technology standpoint but not mature from an access to capital standpoint,” and “that’s a nexus where there’s a clear mandate for the office to participate.”

While Shah said he’s hoping the new incarnation of the Loan Program Office will make more funds available to smaller, early-stage companies, Greentech pointed to a shift in the mix of technologies lining up for support. “Roughly half of the more than $40 billion available is earmarked for advanced fossil fuel and nuclear power,” the now-defunct industry newsletter stated. “But $22 billion can be targeted to direct loans or loan guarantees for renewable energy or advanced vehicle technologies, with another $2 billion for projects on tribal lands.”

Greentech had more on Jigar Shah’s comments on the Loan Program Office then and now.