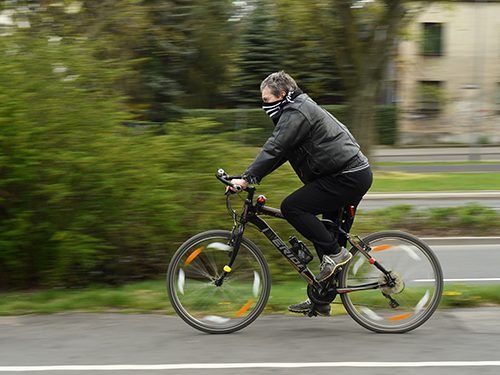 A recent study in shows that new bike lanes set up during the pandemic made the city more accessible for all, prompting cycling advocates to urge policy-makers to make the lanes permanent.

“Many Canadian cities set up temporary bike lanes to accommodate the pandemic cycling boom, and biking enthusiasts want the changes to stay,” reports CBC News, identifying Calgary, Kitchener, Montreal, Ottawa, Vancouver, Victoria, and Winnipeg as among those places that have embraced the power of the pedal, at least temporarily.

Policy-makers are showing signs of moving in tandem, with the federal government recently announcing a new, C$400-million National Active Transportation Fund, the first of its kind in Canada. Set to run for the next five years, the fund will finance projects that provide Canadians with safe alternatives to cars, with bike paths high on the list.

Citing a recent survey from Statistics Canada, CBC says more Canadians are embracing bicycles (and walking) as a more distanced alternative to mass transit in these pandemic times.

But bike lanes are doing more than protecting cyclists from both car and contagion. They also make for a more equitable society, according to a University of Toronto study published in February.

The researchers found that bike lanes purpose-built to help residents cope with pandemic conditions boosted access to workplaces and shopping by at least 10.4% (and up to 22.3% in some areas), while increasing access to parks by 6.3%.

Such access was by no means equitably distributed, however. Senior study author Shoshanna Saxe, Canada Research Chair in Sustainable Infrastructure, said the areas that saw the greatest improvement in accessibility were those that already had existing cycling networks.

Brian Pincott, executive director of Vélo Canada Bikes, said policy-makers need to approach cycling “as a tool for equity so that lower-income neighbourhoods can access safe cycling infrastructure to get around.”

Describing cycling lanes as a socioeconomic necessity, he told CBC they can’t be put only in neighbourhoods where it’s “nice to go for a bike ride.”

Saxe recommended that Canada follow the lead of many European cities and make temporary bike lane expansions permanent. Citing the European Cyclists’ Federation, CBC reports that “42 out of the 94 largest European cities have built new pandemic cycling networks, and more than 400 kilometres of them are permanent.”

As for other plans to accelerate urban cycling in Europe, CBC writes that the UK has dedicated funds to build “240 kilometres of permanent, protected bike lanes, as well as wider sidewalks, safer intersections, and bus-only lanes by 2025”. Brussels has ordered cars to slow down to a maximum of 30 kilometres per hour within city limits and is “conducting feasibility studies for a network of fast bike highways linking the city centre and the suburbs.”

Barcelona is also serious about getting more of its citizens out on two wheels, having “accelerated the construction of 160 kilometres of new or expanded bike paths, which will bring its bike network to 305 kilometres by 2024.”