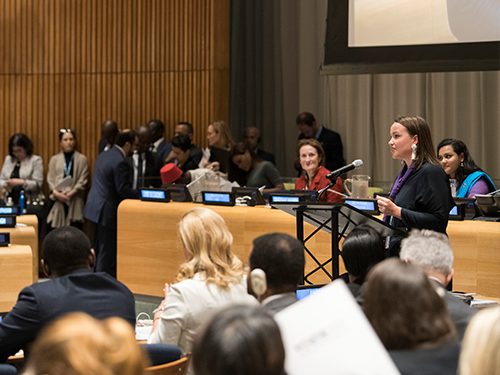 Youth delegates are finally just beginning to claim their seat at the table in United Nations climate negotiations. But some of the (apparent) adults in the room are having trouble accepting that they have anything to contribute to the process.

“As a generation of young people passionate about boosting action on climate change begin moving from street protests into decision-making positions, they face a range of challenges,” the Thomson-Reuters Foundation reports. “Some, despite their expertise, struggle to be taken seriously or find themselves confined to advisory roles and photo opportunities. With much of their work still unpaid, the less-well-off have limited avenues to contribute their ideas.”

As far back as COP 11 in Montreal in December 2005, youth delegates “issued a statement demanding ‘a seat at the table’, saying ‘it’s our future that you are negotiating’,” Reuters recalls. “But such seats remain few, even as youth representatives flood onto panels and events, particularly in the wake of high-profile youth-led protests in 2019, some inspired by Swedish teen Greta Thunberg, which brought millions to the streets.”

“Young people are everywhere—but on a consultative basis,” said Marie-Claire Graf, a sustainability and politics student who led Switzerland’s negotiations on one aspect of the Paris Agreement at the last round of UN climate talks in Madrid in 2019. “Everyone stands up and claps and says how encouraging it is to listen to you—but then they don’t listen, and take the decisions as they did before.”

Graf, then 23, had studied the effort to boost developing countries’ capacity to reduce their greenhouse gas emissions and adapt to the impacts of climate change, “and was asked by the Swiss president’s office to take on the role as the best-qualified person for the job,” Thomson Reuters recalls. “But some senior negotiators were not ready to accept that someone so young could be trusted with the task.”

When one European delegate asked Graf to put him in touch with the Swiss delegate in charge, “I told him that I am the Swiss negotiator leading on this matter,” she recalled. He repeated his request, she repeated her explanation, and “he just walked away,” she added. “Clearly he couldn’t get his head around the fact that a young woman could sit there and take decisions.”

Thomson Reuters cites that example as part of a bigger problem. “While young people have taken on climate negotiator roles with real power in countries from Costa Rica to the Netherlands and Sudan, many are still left out of other key decisions, such as how pandemic recovery funds are being spent,” the news agency writes.

Aoife Fleming, a 23-year-old Dutch climate negotiator and law student told Thomson Reuters that youth “are often the first ones not allowed in the room anymore” when negotiations hit a roadblock, despite what TRF calls the “generation’s worth of borrowing” now on the table that could either drive or undercut the transition off carbon.

“That’s so much money and it has such a large influence on how the future will look,” Fleming said.

Nisreen Elsaim, a 26-year-old physicist and Sudanese climate negotiator, said youth voices have helped speed up the glacially slow pace of climate action at the international level. “Having…a new generation’s blood in the negotiation makes things go faster,” she told Thomson Reuters. And “in her country, where more than three in four people are farmers or pastoralists and already face growing losses from rising heat, crop failures, and extreme weather, the need to act swiftly is clear,” the news agency adds.

But while Elsaim has been funded to attend six COPs, three of them as a negotiator, Ghanaian negotiator Kassim Gawusu-Toure, 33, said others have to find ways to cover their own costs. “It’s a serious challenge young people from the continent are facing, raising funds to get themselves there,” he told TRF.