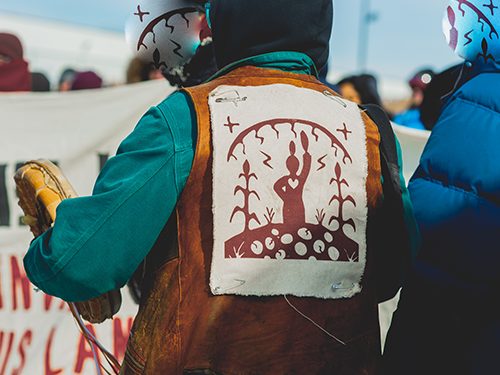 The government of Canada has been quick to hit back against fast-moving emergencies like wildfires—and against actions by Indigenous land defenders—but the country has been bitterly slow to respond to the gradual juggernaut of the climate crisis. Now, two Wet’suwet’en chiefs are calling for an end to those politically-motivated delays.

Last year’s aggressive efforts by the RCMP to force members of the Wet’suwet’en from their ancestral land so that pipeline construction could proceed were yet another iteration of Canada’s refusal to move on two intertwined and escalating traumas, write Chiefs Dini Ze’ Lho’imggin and Dini Ze’ Smogilhgim in a recent op-ed for the Globe and Mail: “the need to curb and then eliminate greenhouse gas emissions, and the need to reverse and then heal the racist colonization of Indigenous people here.”

A powerful symbol of these joined crises arose recently, when leaked RCMP documents appeared that referred to the armed clearing of a Wet’suwet’en blockade as being necessary for “sterilizing” the site. While many arrests were made, the writers note, “no criminal charges or civil contempt proceedings were ever completed.”

Such “military efficiency” is seen often in Canada’s response to short-term events, whether it’s to respond to a pine beetle infestation or to a blockade by Indigenous land defenders. But, the authors note, no speed has been apparent in the country’s response to long-standing crises like “the intergenerational trauma from residential schools, the Sixties Scoop, and violence against Indigenous women, as well as the essentially irreversible heating effects of greenhouse gas emissions from fossil fuels.”

The constitutional climate challenge filed last year on behalf of the writers’ two House groups of the Likhts’amisyu (Fireweed) Clan of the Wet’suwet’en, as well as their community’s “10-year entanglement with Canada’s fossil fuel industry”, reveals precisely just how well such foot-dragging has served the interests of non-Indigenous power.

“In both cases, government responses have largely been comprised of solemn pronouncements, fact-finding investigations, and performative legislation and policy,” the authors write. Meanwhile, “business-as-usual resource development” has carried on.

“Canada has promised to reduce its greenhouse gas emissions in four international agreements since 1992, and even declared a climate emergency in 2019—and yet still fails miserably to meet any of its targets.”

Throwing those failures into sharp relief are the Wet’suwet’en’s own efforts, dating back to 2001, to voluntarily end the traditional harvest of sockeye salmon from the Wedzinkwa (Morice) River in northwestern B.C. The authors also confirm the connection between the decline of those salmon stocks and proposals to export liquified methane and tar sands/oil sands bitumen through Wet’suwet’en territory.

When settlers first began arriving in Wet’suwet’en and Gitxsan territories, they called it “‘terra nullius’, or ‘nobody’s land’,” the authors note. Today, they add, that calls to mind recent words from the Australian philosopher Roman Krznaric, who called global heating “the rich countries’ colonization of the future—tempus nullius, or ‘nobody’s time’, as if it is also a territory devoid of inhabitants.”

Indigenous law, the authors say, “does not countenance such disdain for the future.” And if Canada’s lawmakers do not adopt similar values—rather than continuing to balance the political benefits of the moment—“the planet and its inhabitants will be balanced to death.”