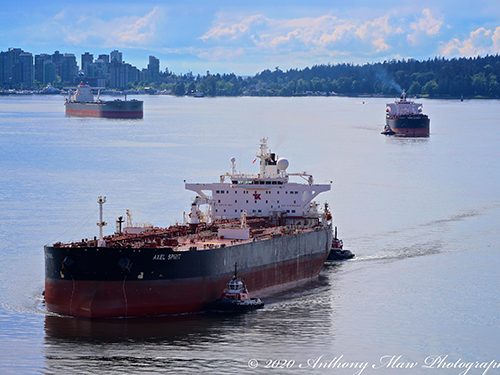 The Tsleil-Waututh Nation on Canada’s southern west coast has been warning for years that heavy marine traffic in the Burrard Inlet is producing too much wave action and eroding the shoreline. Now, a new study has confirmed this to be the case—and the situation is set to worsen as the Trans Mountain Pipeline brings in even more ships.

“For Tsleil-Waututh Nation Elders and members, it’s obvious what increased marine vessel traffic in Burrard Inlet has done to their waters and lands,” writes the North Shore News.

“Seeing the erosion happen before your eyes—it’s a piece of your history—it’s like having your grandmother’s quilt and watching threads of it being pulled and torn,” said Tsleil-Waututh spokesperson Charlene Aleck. She confirmed that higher traffic in the Inlet, which acts as Vancouver’s central harbour, has changed the “wave climate”, leading to degradation of shoreline ecosystems and damage to both archaeological sites and places of present cultural importance.

After having its concerns ignored or rebuffed by regulators, the Nation hired engineering consultants Kerr Wood Leidal to conduct a study of the wave climate in the area. Working with Marine Labs, the experts “found that vessel wakes significantly increase the overall wave energy in Burrard Inlet beyond natural wind-generated waves between 1.2 and 4.6 times depending on the location, and that current tugboat traffic contributes up to 20% of waves generated by vessels.”

Such findings were a definitive rebuttal of claims by the government that the wave effect of marine vessels was “negligible”, the News writes.

Tsleil-Waututh project manager Spencer Taft said the modern-day data collection “uses Western science to support Tsleil-Waututh knowledge, perspectives, and priorities in a really powerful way.” Tugboats in the harbour currently cause an average of 242 wave events each month, he told the News, but a completed Trans Mountain pipeline expansion will mean an additional “300 new tugboat trips per month, or more than double the wave energy from tugboats alone.”

Taft also warned of the devastating effects of tanker waves, noting that the pipeline will bring an estimated 60 tankers through the Inlet each month, up from the current average of six.

Citing the report, the North Shore News writes that while “further study will be required to establish a definitive linkage between vessel wakes and erosion in the study area,” the findings so far “provide evidence to corroborate TWN’s strong perception that vessel wakes are a significant contributor to the shoreline erosion they have observed.”

The Tseleil-Waututh Nation hopes the study will push regulatory agencies to consider the cumulative impacts of marine vessel traffic on inland waters, rather than assessing those impacts on a project-by-project basis.