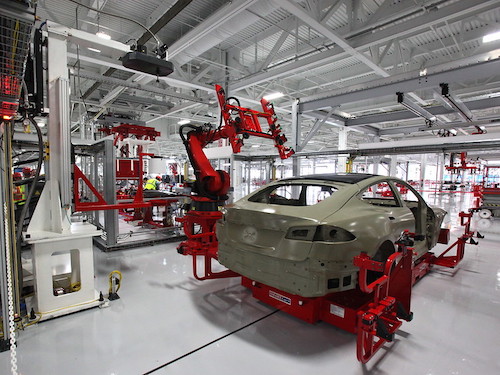 Tesla CEO Elon Musk’s insistence on reopening his Fremont, California auto plant last May in the midst of a global health emergency resulted in an estimated 450 extra COVID-19 cases in California’s Alameda County, according to public health data obtained by the legal transparency website PlainSite.

County-level data published by PlainSite “showed Tesla received around 10 reports of COVID-19 in May when the plant reopened, and saw a steady rise in cases all the way up to 125 in December, as the disease caused by the novel coronavirus peaked around the country,” the Washington Post reports.

The paper said it first wrote about the new cases in June, “after Musk decided to reopen despite a countywide stay-at-home order, daring officials to arrest him.”

Shortly after the pandemic began, Musk “fought vigorously against the county-mandated shutdown, arguing Tesla should be allowed to continue producing cars despite the stay-at-home orders,” the Post recalls. “In late April, he railed against the government mandates, hurling expletives during an earnings call and calling them ‘fascist’.” He previously called the panic about the virus “dumb” and predicted there would be “close to zero new cases” by April. (April 2020, that is.)

In May, the plant reopened, “ultimately drawing support from anti-shutdown crowds and even President Donald Trump,” the Post writes.

“Tesla is restarting production today against Alameda County rules,” Musk tweeted May 11. “I will be on the line with everyone else. If anyone is arrested, I ask that it only be me.”

It wasn’t long before Tesla “came under fire for its treatment of workers”, the Post adds, telling staff they could stay home if they were uncomfortable returning to work but then issuing termination notices to people who stayed away. And last week, Musk was still at it.

“On Friday, he sent a tweet casting doubt on aspects of coronavirus vaccines, despite medical experts’ assurances that they are safe and encouragement to the broader public to receive both doses of those that require it,” the Post says.