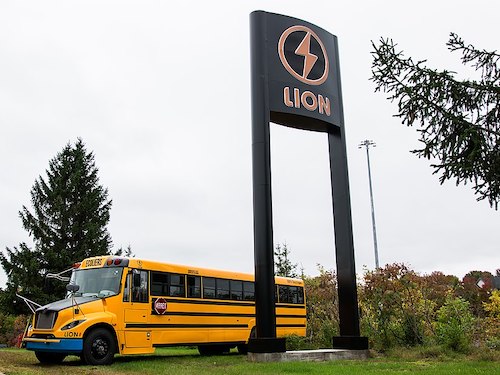 Electric school bus and truck manufacturer Lion Electric is building a new C$185-million battery pack assembly plant near its headquarters in Saint-Jérôme, Quebec, after the federal and provincial governments each invested $50 million in the new venture this week—possibly forestalling a decision to locate the factory in the United States.

The investments take the form of loans, but about $15 million from each government “will be forgivable if the company meets certain conditions, including keeping jobs in Quebec,” CBC reports. The new facility will create 135 jobs when it opens in 2023, The Canadian Press says, and produce enough lithium-ion battery packs and modules to electrify 14,000 medium- and heavy-duty vehicles per year, Electric Autonomy Canada writes.

“People are aware that the recovery is going to be extremely important, and the kind of jobs and investments that Lion Electric represents, the kind of future that we’re going to be building by making investments together, is extremely exciting,” Prime Minister Justin Trudeau said Monday, during a joint announcement with Premier François Legault at Montreal’s Palais des Congrès.

“We have the large majority of our energy coming from electricity, we don’t produce oil in Quebec, so every time we switch from oil to electricity, we win, not only for the environment but economically,” Legault added. “In the actual context of economic recovery, this is the type of initiative that can help Quebec differentiate itself in promising sectors.”

“Prime Minister Trudeau told me this morning that we are the first Canadian OEM [Original Equipment Manufacturer] to do something like this right now. It’s really going to the next level with what we are doing in terms of technology control, in terms of cost reduction,” he added. “The cost reduction we will get from controlling everything is huge,” in a process that will also enable Lion to ensure quality control and minimize any shortages of cells.

Electric Autonomy says there’d been months of speculation that Lion would set up shop in the U.S., after arranging financing with Kansas City-based Northern Genesis and signalling that it would be trying for a listing on the New York Stock Exchange. But “thanks to the financing provided by the federal and provincial governments, we will now be able to manufacture in Canada what we previously imported,” Bédard said in a release. “Lion, Quebec, and Canada will gain from this, both on the economic and environmental fronts, to the great benefit of generations to come.”

He added that the new plant will cut the cost of battery pack assembly by almost half, delivering “game-changing numbers for the company,” Electric Autonomy writes.

“I think it’s great,” Bédard told the publication. “What’s exciting me very much is the technology is evolving so fast and if you do not control your technology, who will?”

During the announcement Monday, Quebec Economy Minister Pierre Fitzgibbon “spoke at length about the province’s deposits of lithium and nickel—key components in electric vehicle batteries—as well as its supply of low-emission hydroelectricity,” CBC writes.

“If we play our cards right, we could become world leaders in this market of the future,” Fitzgibbon said.

Université de Montréal chemistry professor Mickaël Dollé added that those kinds of strategic metals are currently exported to Asia, to be incorporated in battery cells that are then imported back to Quebec—but warned there’s a narrow window for the province to establish its presence as a battery builder before other countries jump in.

“The decision has to be taken now, or in the coming months, but if we wait too long we may miss our main goal which is to get our own supply chain in Canada,” Dollé told CBC.