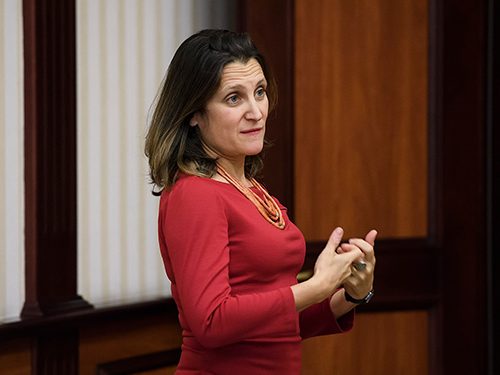 The federal government could be at risk of squandering its best opportunity at a just, green transition if a rosy February jobs report, the prospect of higher borrowing costs, and the belief that consumers are itching to spend their pandemic year savings pull it away from the job creation and economic recovery investments it promised in the Speech from the Throne last fall.

If Finance Minister Chrystia Freeland mutes those commitments in her long-awaited budget last year, it will mean ignoring several long-standing reasons to invest federal dollars, and jeopardizing Canada’s competitive position at a time when U.S. and European governments are embracing a green transition, several analysts told The Energy Mix this week.

“Investments in renewable energy were never intended as a short-run make-work project: clearly this is a long-run building strategy that will take many years,” said economist Jim Stanford, director of the Vancouver-based Centre for Future Work. “A top priority of a post-COVID reconstruction strategy has to be to direct investment and employment opportunities toward the communities that need them the most.”

That line of thought seemed central to the government’s plans as recently as November 30, when Freeland released her fiscal update. And that much more so in September 2020, when the Trudeau government put climate action and cleantech development at the centre of a million-job economic recovery strategy.

“Today the Government of Canada delivered the most progressive speech from the throne heard in a generation,” Climate Action Network-Canada Executive Director Catherine Abreu said at the time.

Through the fall and early winter, much of the expectation for a far-reaching green transition was based on the idea that, with interest rates at record lows, Ottawa could borrow more freely to invest in sustainable infrastructure without triggering excessive inflation. In fact, with rates sitting below inflation and expected to hold at record-low levels through 2023, “you’re actually making money issuing 30-year bonds. You’ll be selling it back at a lower value than you pay in interest,” author Seth Klein told The Mix in early fall.

“Think about what green infrastructure and Green New Deal infrastructure is,” he explained. “It’s zero-emission, affordable housing. Child care spaces. Renewable energy projects. High-speed rail. Other public transit infrastructure. Most of those things have monthly income streams: The $10-per-day child care bill. Your train ticket. Your transit fee. Your monthly utility bill. Which is to say that, if you can borrow at a fraction of 1% to build these things that will have a revenue stream for the next 50 or 70 years, it’s foolhardy not to be doing that at an incredible scale right now.”

But while that assumption hasn’t fallen apart in the last month, it’s begun to erode. With Statistics Canada reporting that the economy created 259,000 new jobs in February, “the federal government’s promises of late 2020 to create a million jobs and spend C$100 billion on the economic recovery are looking like they could be overkill,” Toronto Star economics columnist Heather Scoffield wrote over the weekend. “With projections for strong growth later this year and the job market showing some signs of resilience, it’s looking like ‘whatever it takes’ for a recovery will be somewhat less than the big promises they committed to.”

Even with the country still short 600,000 jobs, and another 400,000 people working less than half their normal hours, “employment levels are not nearly as bad as they were last September,” she said. And the million positions undercut by the pandemic don’t necessarily mean “a million people in need of government-created green jobs.” While there are still serious concerns about jobs for young people, especially women, as well as self-employed workers and small businesses, Scoffield questioned whether the government will need to spend the full $100 billion Freeland had earmarked for the economic recovery.

(There’s also some sense in Ottawa that a connection to those priorities—the need for an equitable recovery that addresses the country’s “she-cession”—may be the key to unlocking all the recovery funds the government previously promised.)

The Globe and Mail had a similar analysis late last week, noting that federal plans for $70 to $100 billion in stimulus spending over the next three years assumed a soft economy and low interest rates. “Those assumptions have been turned on their head, less than four months after the November update, and weeks ahead of the first pandemic-era federal budget,” the Globe wrote. “Economic growth in the fourth quarter was much stronger than expected, a trend that stretched into February, with employment growing much faster than expected. In the United States, a US$1.9-trillion stimulus package will help out not only the American economy, but also Canadian exporters.”

The Globe picked up private sector economists’ warnings that a recovering economy could drive up the government’s borrowing costs, producing “potentially bad news for the federal deficit”.

But those concerns mustn’t deter Ottawa from making the investments that will deliver the recovery Freeland has been promising and drive the transition to a just, green, decarbonized economy, several analysts told The Mix.

“The argument for substantial investments in a green economy is that we do not want to repeat the mistakes of the 2008-09 recession, where the so-called recovery saw growth based on the inflation of various speculative bubbles in areas such as housing and a persistence of precarious employment and inequality,” explained Efficiency Canada Policy Director Brendan Haley.

That happened “because government investments were removed too soon and, most importantly, because governments around the world failed to direct capital towards sectors with significant long-term potential for innovation and productivity improvements.”

It isn’t yet clear whether economic growth will easily return after the pandemic, Haley added. But “even if it does, there is an urgent need for public investments that set a more productive direction for economic growth to deal with the climate emergency and tackle mid- to long-term structural economic problems, such as an aging work force and housing affordability.” He described the push to eliminate greenhouse gas emissions by mid-century as “the obvious opportunity to spur a more productive and socially useful form of economic development in the next decades.”

Stanford said the talk of a full recovery is decidedly premature. “While the economy is making some progress toward re-opening and recovery, we are still experiencing the deepest shortfall in employment and output in the post-war era,” he wrote in an email, with employment still down 3% in February compared to the same month last year.

“The reality is the economy is still in need of powerful, sustained injections of spending power and investment,” he added. “Renewable energy is ideally situated in that regard because it addresses multiple goals (including sustainability and competitiveness), not just stimulus. It creates needed jobs now and positions us better for a successful low-carbon future.”

Stanford called for targeted supports, including community benefit agreements and pro-active recruitment and training, to ensure the economic gains of the reconstruction effort reach the communities hit hardest by the pandemic. “Every recession is unfair,” he said. “But this one is brutally, unforgivingly unfair. The biggest burden has been carried by those who can least afford it: low-income workers, workers in precarious or impermanent jobs, racial and ethnic communities.”

And with the Biden administration committing to serious green transition investments, he said it’s essential that Ottawa accelerate its renewable energy investments and keep its now 14-month-old promise to introduce a Just Transition Act.

“Joe Biden’s ambitious, well-funded climate plan is a real wake-up call for Canada,” he wrote. “It removes any vestiges of doubt that this energy transformation is already happening, and will only accelerate. It creates huge opportunities for Canadian exporters of goods and services that are inputs to renewable energy projects. And it should push us to lift our own game.”

Others agreed that the imperative for Canadian action on the green transition is now economic, even more than environmental—even though it’s more likely to play out in specific investment announcements than in grand, integrated strategies.

Veteran cleantech analyst Céline Bak said governments around the world are expecting a “significant period of growth” and rising interest rates through the second half of the year. Yet the European Union has still committed to a €1.85-trillion economic recovery package with 30%, or about €630 billion, earmarked to implement the European Green Deal. That funding, in turn, was intended to attract even more investment from the private sector to help finance a 55% greenhouse gas reduction by 2030—light years ahead of Canada’s promise of just above 31%.

Bak highlighted three areas where it will make most sense for Ottawa to invest:

• Innovation in sectors where new technologies have not yet been brought together—such as steelmakers integrating with hydrogen producers that are in turn connecting their operations with renewable energy generators;

• Productive investments the private sector won’t make on its own, including battery and grid transmission infrastructure;

• Areas where “supply and demand are not connected” despite massive opportunities to invest, create jobs, and drive down emissions—such as mass building retrofit programs that can reduce project costs by 50 to 60% while drastically reducing energy use and emissions.

“It creates opportunities for local materials companies. It’s a systemic approach,” Bak said of the mass, deep retrofit strategy most recently championed by Cobourg, Ontario-based energy modeller Ralph Torrie. “There’s always a case to be made for public investment where supply and demand haven’t been aggregated.”

Europe has grown drier over the last two millennia