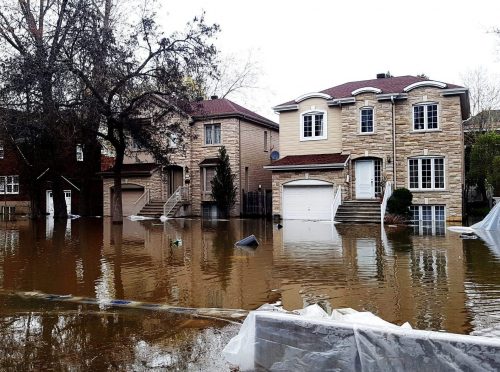 Sea level rise and severe storms are sending more and more water surging into America’s towns and cities, destroying property and lives. That has activists calling for reform of the country’s National Flood Insurance Program as inequitable insurance rates leave many citizens unable to pick up the pieces.

“The cost of flood damage to homes nationwide will increase by more than 50% in the next 30 years, according to data released by the First Street Foundation, a non-profit research organization that studies flood risk and housing,” writes National Public Radio. And Americans who are poor and/or Black will suffer most.

“More than four million houses and small apartment buildings across the contiguous U.S.” are at substantial risk of flood damage, NPR adds, citing the report.

“These properties are going to face a significant economic loss over this 30-year period, and it’s something they’re just not built to defend against,” said Matthew Eby, executive director of First Street.

Places like the impoverished rural hamlet of Rainelle in southern West Virginia are already hanging by a thread, possessing nothing close to the budget necessary to rebuild after a 2016 flash flood nearly wiped it out completely. Traumatized residents left their homes with what few possessions they could salvage, never to return. A local councillor told NPR that Rainelle “doesn’t have the money to repave roads downtown that were damaged by the 2016 flood, let alone to help homeowners rebuild.”

Increasing numbers of flash floods birthed by deluging rainstorms are likewise a threat for residents of Alexandria, Virginia, who also need to contend with higher tides as sea level rise. First Street Foundation pegs the increase in flood damage costs in one part of the city at more than 75% by 2050.

But unlike Rainelle, Alexandria is in the financial position to fight back, planning to spend “nearly US$500 million for stormwater management over the next 10 years.” Yon Lambert, director of Alexandria’s Department of Transportation and Environmental Services, told NPR he feels optimistic about the city’s future: “When we look 10 to 15 years out, we see a city that is more resilient to these climate change-induced rainfall events.”

Individual Alexandrians are far less sanguine, writes NPR, noting that many homeowners are deeply worried about the rising costs of flood damage.

Citing the First Street Foundation report, NPR says current flood insurance rates “would need to more than quadruple to keep up with the costs of climate-driven flooding.” But the National Flood Insurance Program is already mired in debt, to the tune of more than $36 billion. The Federal Emergency Management Agency is “already preparing to raise insurance premiums in many places this year” just to keep the program afloat.

What many towns desperately need—especially poor and minority communities—is for the program to be overhauled. As it stands, premiums are already too high for many of the country’s poorest people to afford, while those with means are paying far less than they should.

“Nationwide, people are getting the best deals on flood insurance in communities where the median income is higher,” NPR writes. “Those places include wealthy neighbourhoods in Sarasota, Florida; Charleston, South Carolina; and exclusive suburbs of Chicago, Houston, Los Angeles, and New York.”

Some changes are expected to come soon, writes NPR. “When FEMA begins to raise flood insurance rates later this year, it plans to begin factoring home value into its calculations so that people who own more expensive homes pay monthly premiums that reflect their actual risk of flood damage.” That shift could also “help address the current race and income disparities in the cost of flood insurance.”

What’s more, higher flood insurance premiums “could also help reverse a decades-long trend of overdevelopment in floodplains,” as developers and prospective homeowners may be correspondingly less likely to invest “in places that are more and more likely to be underwater.”

Warning that raising flood insurance premiums will also hurt those most needful of protection, First Street’s Eby urged Congress to pass legislation that will help people in the country’s poorest communities, like Ranelle, afford the insurance they will need to survive in an increasingly water-logged world.