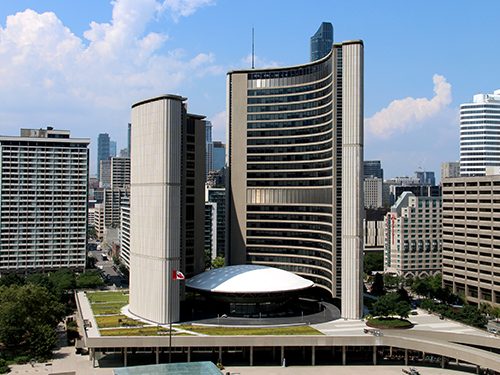 Toronto has become the 21st Ontario city, and by definition the largest, urging the Ontario government to phase out fossil gas-fired power generation as soon as possible, after councillors and Mayor John Tory adopted a resolution supporting a provincial ban by a 21-2 margin.

News reports on the landmark vote were apparently knocked off the page by a city staffer’s accidentally-broadcast profanity during the online council meeting. But the Ontario Clean Air Alliance (OCAA) reported the story yesterday in an alert to supporters.

The Atmospheric Fund CEO Julia Langer endorsed the phaseout call in mid-February, arguing that Toronto won’t meet its own climate targets without a provincial gas phaseout. She explained that “‘natural’ gas is actually methane, and it’s a potent fossil fuel often sourced from environmentally devastating fracking in the U.S.”

Last week, TAF identified fracked gas as the main culprit after reporting that greenhouse gas emissions had increased 7% in Toronto and 5.2% in the Greater Toronto and Hamilton Area (GTHA) in 2018.

As The Mix went to virtual press Thursday evening, local media in Toronto had not yet reported on the council resolution. But the Toronto Star was on the scene, reporting on a “hot mic” moment where a city manager accidentally told councillors exactly how he felt about the slow pace of their deliberations.

The Star’s only mention of the gas phaseout immortalized a councillor’s exclamation that “we’ve got gas,” after a call to reopen the vote on the resolution.

From the OSPE report (https://ospe.on.ca/advocacy/phasing-out-natural-gas/) “Gas-fired plants do not operate much, so eliminating them will not reduce emissions much but will dramatically increase electricity prices. The reason is that all alternative clean technologies are much more expensive than gas-fired plants.”
This is no surprise. It’s great to have a goal, but not if you don’t have a plan to attain it. Ideology vs. reality: when reality wins (as it always does) those who see the obvious and seize the opportunity will become rich, the governments on the other hand will sink much farther in debt and the average person will need to pay more. Meanwhile, our largest competitor in manufacturing output is China who is pumping out more GHG’s now than ever and is ramping up coal production and coal plant installations, yet we are still going to tie our hands with high-priced energy costs and make our own manufacturing noncompetitive. (https://rhg.com/research/chinas-emissions-surpass-developed-countries/) (https://e360.yale.edu/features/despite-pledges-to-cut-emissions-china-goes-on-a-coal-spree).
It is great Canada is committed to reducing our GHG emissions (which are a grand total of less than 2% of global total: https://www.ucsusa.org/resources/each-countrys-share-co2-emissions) but without economic alternatives it will drive us to bankruptcy and will still make no difference to climate change.

Michael, the good news is that we have economic alternatives to fossil gas – new wind and solar are now between 3 and 7 cents per kWh, and those prices are declining due to economies of scale and improved technology. Conservation is ever lower at around 2 cents. But our best opportunity for supply to replace gas in a hurry is to import Quebec’s surplus water power which they’ve offered to us at just 5 cents. We could triple our water power imports with no transmission upgrades, and with modest upgrades we could import much more. And QC water power reservoirs can act as a giant battery to back up ON’s wind and solar.
https://www.cleanairalliance.org/wp-content/uploads/2021/02/GAS_REPORT_2021_WEB.pdf