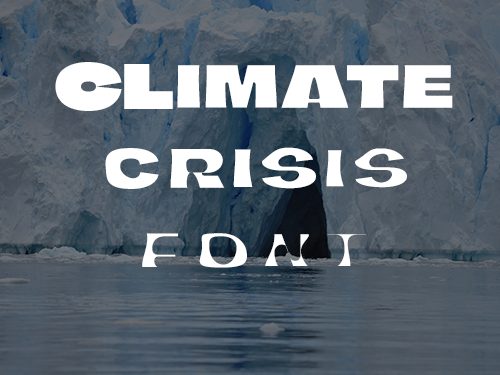 Two typographers in Finland and South Africa have developed a new font, and named it Climate Crisis, to embody a range of scientific projections for the loss of sea ice through the middle of this century.

“The font, designed by Finnish typographer Eino Korkala in collaboration with South African type designer Daniel Coull, has eight different weights based on data from the National Snow and Ice Data Center (NSIDC) and predictions from the Intergovernmental Panel on Climate Change,” Fast Company reports. “The boldest font represents the year the NSIDC started satellite measurements, in 1979. The thinnest represents the year 2050. By that time, the crossbar in the A has completely melted away, leaving just a shell of the original letterform behind.”

Jääskeläinen said his paper “is constantly experimenting with new ways of journalistic storytelling, and putting visual emphasis on the font was a fresh approach to the challenge.” It’s available as a free download, and Helsingin Sanomat is also in discussions about a Cyrillic version for typography fans (or climate hawks) in Russia.

Fast Company’s coverage comes complete with visuals of the font itself, and on declining Arctic sea ice extent.