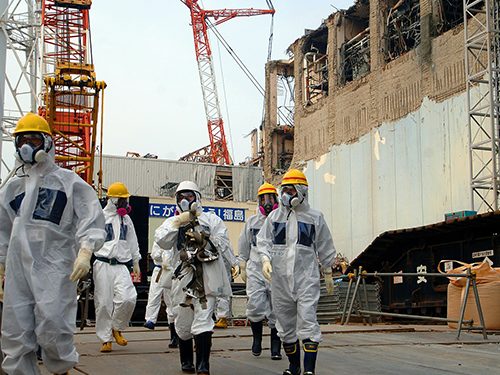 A decade ago, on March 11, 2011, a massive earthquake created a 14-metre-high tsunami wave which destroyed the reactors of a Japanese nuclear power station at the town of Fukushima. Ten years on, the cleanup has barely begun.

Large areas of farmland and towns near the plant are still highly contaminated, too dangerous to inhabit. Constant vigilance is needed to prevent the stricken reactors causing further danger. It will be at least another 20 years before they can be made safe.

At first, the gravity of the accident was overshadowed by the other damage the tsunami had caused, particularly the loss of nearly 20,000 people from communities along the coast who were swept to their deaths as their towns and villages were ruined.

Heart-rending scenes filled television screens across the world for days as rescue teams hunted for survivors and parents separated from their children searched evacuation centres.

As with the Chernobyl accident in 1986, the world’s worst nuclear disaster, the true extent of the damage to Fukushima’s six reactors was not fully grasped. When it was, the authorities tried to play it down.

Because the wave had overwhelmed the cooling system, three reactors had suffered a meltdown, but for some this was not public knowledge. The damage had meant that overheated uranium fuel had melted, turning to liquid and dissolving its cladding. The cladding contained zirconium, which reacted with the cooling water to make hydrogen; by March 14 this had caused three explosions at the plant.

Downwind, the danger from the radiation spewing from the plant was so great that 164,000 people were evacuated from their homes. Many will never return because the houses are too contaminated.

In an attempt to get people to return to the villages and towns in the less-affected areas, the government spent US$28 billion (£20 billion) and created 17 million tonnes of nuclear waste. This has proved only partially successful because of widespread mistrust of the government, and measurements by independent groups, including Greenpeace—which show that levels of radiation are well above internationally agreed safe limits for members of the public.

And the knock-on effects of the disaster, both in Japan and in the rest of the world, are still being felt. Japan’s nuclear industry shut down its 54 operational reactors, and both the nuclear companies and the government are still trying to persuade local people to allow most of them to reopen.

This year there are 33 reactors that could still be restored to use, but only nine (in five power plants) that are actually operating.

Across the world, some countries decided to close down their reactors as soon as possible, and not to build any more. Among them was Germany.

Even in countries like France, where nuclear power dominates the electricity system, there were demands for the country’s reactors to fit far tighter safety measures.

The net effect of the accident has been to turn public opinion against nuclear power in many countries. Even in those still interested in building new stations, the higher safety standards now demanded have made nuclear power more expensive.

In Japan itself, the Fukushima crisis is far from over. The government is still facing compensation claims from citizens, and the bill for the cleanup keeps mounting.

One of the most critical current problems is the 1.25 million tonnes of cooling water used to prevent the stricken reactors from further meltdown. It is now stored in tanks on the site.

In October 2020, the government announced plans to release it into the Pacific Ocean, because it could think of no other way of getting rid of it. This idea has caused outrage among fishermen along the coast, who fear that no one will buy their catch for fear of the radiation.

Longer-term technical problems also remain unresolved. With the reactor cores too dangerous to approach, special robots have been developed to dismantle them. This is perhaps one of the most difficult engineering tasks it is possible to envisage, because intense radioactivity attacks electrical equipment and can destroy the expensive robots.

The government continues to reassure citizens that it has the situation under control, although it expects it will take decades to make the area completely safe.

But there continues to be criticism among environmental groups about the government’s handling of the situation, both at the plant and in the surrounding countryside.

The Greenpeace report details moves to coerce local people into returning to their homes, even though local radiation remains well above international safety levels.

The report said the result of a November 2020 survey showed that in some areas which the government had designated as safe, Greenpeace’s measurements found radiation remains too high for normal life to be considered possible without increased health risks to returning citizens, particularly children and women of childbearing age.

“One decade after March 2011, we are in the early stages of the impact of this disaster,” the report states. “This is not the official narrative. For the government of Shinzo Abe, in power for most of the last 10 years, and his successor Yoshihide Suga, the communication to the people of Japan and the wider world is that decontamination has been effective, completed, and that radiation levels are safe. This is clearly false.”

The report adds that the national government “is on a mission to erase from public memory the triple reactor meltdown and radioactive contamination of a large part of Japan. However, they have failed to impose their atomic amnesia on the people of Japan.”

Greenpeace says this failure is largely due to active citizens and their lawyers holding the Tokyo Electric Power Company (TEPCO) to account for the accident and asking for compensation.

It pledges that, together with scientists and various United Nations agencies that monitor the plant, it will ensure that the “ongoing nuclear disaster, its effects and consequences will continue to be better understood and explained in the years and decades ahead.” − Climate News Network

Inside Climate News: 10 Years After Fukushima, Safety Is Not the Biggest Problem for the US Nuclear Industry

Globe and Mail: Ten Years Ago, the World Took Away the Wrong Lesson from the Tragedy of Fukushima