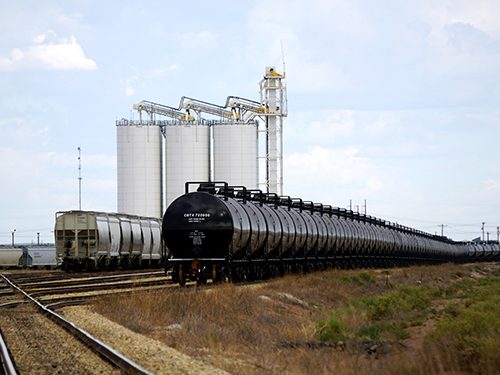 The fierce debate over cross-border pipelines is putting more Canadian oil and gas on trains destined for the United States—a country experts fear is ill-equipped for the potential consequences.

It would take an oil-by-rail calamity of a scale comparable to the 2013 Lac-Mégantic disaster in Quebec before Americans wake up to the dangers, U.S. rail safety analysts say.

“There’s a bullet whizzing past our head,” said Eric de Place, an energy policy expert and director at the Sightline Institute, a Seattle-based think tank focused on sustainability issues in the U.S. Pacific Northwest.

On average, more than a million barrels of crude oil travel through Washington state each week, most of it from North Dakota but about 13% from Alberta and Saskatchewan, according to the state’s Department of Ecology.

The risks were punctuated late last year when seven tanker cars carrying crude oil derailed and caught fire just outside Bellingham, WA, a city of nearly 90,000 people not far from the Canada-U.S. border.

“The only thing I can imagine is that there will have to be a significant loss of life before we get the regulatory attention that the industry deserves, in my opinion, and that’s a tragedy that’s just waiting to unfold,” de Place said.

“We’re talking about 300-foot tall fireballs—this is cinematic, when accidents happen. I mean, it looks like a James Cameron movie.”

It’s a real-life image Canadians know all too well.

In July 2013, an oil-laden train derailed and exploded in the heart of Lac-Mégantic in the Eastern Townships region of Quebec, killing 47 and levelling half of downtown—the deadliest non-passenger train accident in Canadian history.

The tragedy put a laser-sharp focus on oil-by-rail in Canada, resulting in a number of regulatory changes, including an end to single-person train crews and the phaseout of DOT-111 or TC-111 tanker cars for crude oil.

In the U.S., however, new rules that took effect in 2016 didn’t explicitly prohibit the use of DOT-111s for flammable cargo, said Fred Millar, an independent rail industry analyst and safety expert in Alexandria, VA.

A Bureau of Transportation report submitted to Congress in September found that while DOT-111s stopped carrying crude oil in 2018, the cars still carry some flammable liquids such as ethanol, and won’t be completely gone until 2029.

In 2019, the report said, 73% of the tank car fleet carrying crude oil in the U.S. comprised DOT-117 cars—a heavier, “jacketed” tanker with more robust valves and reinforced shields at either end.

“More than 99.99% of all haz-mat moved by rail reaches its destination without a release caused by an accident,” Jessica Kahanek of the Association of American Railroads said in a statement.

Developed after Lac-Mégantic, DOT-117s are only “marginally safer” than their predecessors, said Millar, noting that Congress has consistently refused to impose limits on train length or speed, or require that dangerous cargo be rerouted away from population centres.

“The thing about rail car safety is there’s a trade-off between the weight of the car and how much product you can carry—there’s a conflict between safety and profit,” he said.

“If you put on more steel to protect from puncture, that means you have to put in less product.”

Oil and gas exports from Canada depend heavily on commodity prices; crude shipments by rail plunged last summer as the price of oil collapsed amid the COVID-19 pandemic, well off the dramatic peaks they posted at the beginning of the year.

But those exports are ticking back up: Canada exported more than 190,000 barrels a day in December 2020, twice the level posted just four months earlier, according to data from the federal energy regulator.

Environmentalists have long opposed pipeline projects like TC Energy’s Keystone XL and Enbridge Inc.’s Line 3 and Line 5 for fear of an expansion of Alberta’s oilsands operations as well as further North American dependence on fossil fuels.

President Joe Biden cancelled the Keystone XL expansion on his first day in office, while Michigan Gov. Gretchen Whitmer wants to shut down Line 5, which links Wisconsin and Sarnia, ON, via the Straits of Mackinac between Lake Michigan and Lake Huron.

Natural Resources Minister Seamus O’Regan has vowed to defend Line 5, which he called a vital source of energy and jobs in Michigan and Ohio, as well as Alberta, Saskatchewan, Ontario, and Quebec.

That energy is going to get to market by any means available, all of them less reliable “and with regard to oil by rail…far less safe” than pipelines, O’Regan told a House of Commons committee last Thursday.

“Just so that we all understand what’s at stake…that energy, those molecules, are going to have to be transported either by rail, by truck, or by marine transportation,” O’Regan said.

“They will have to get sourced, because people will not be kept cold—that’s for sure.” [Except that the trade-offs really aren’t that simple or stark—Ed.]

Millar said the Trump administration tried to make it easier to ship energy by rail in the U.S., including authorizing the transport of liquefied natural gas throughout the country and trying to block efforts to require two-person train crews.

An appeals court in Nebraska last month rejected the Trump-era decision to abandon the two-person rule, which the Obama administration introduced in 2016 in response, in part, to Lac-Mégantic.

“The rail industry overall—but hazardous materials transportation specifically—is more dangerous than it was before.”

This report by The Canadian Press was first published March 7, 2021.