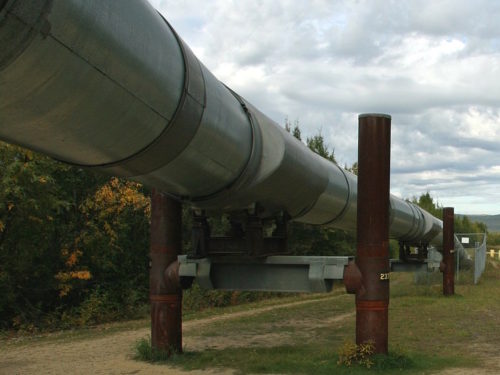 O’Regan’s words are fighting ones, reports the Globe and Mail, citing a senior Global Affairs official who said Ottawa “would invoke a 1977 Canada–U.S. treaty, which forces binding arbitration on the matter, if necessary.”

And the feds are “watching it like a hawk,” O’Regan told a House committee last week. “We are watching it on almost a minute-by-minute basis and we will be absolutely prepared to intervene at exactly the precise moment.”

This breathless depiction of the federal government as a circling bird of prey, ready to swoop down precisely on a target that is, as yet, strategically unclear makes it difficult to be sure just what O’Regan aims to convey with his metaphor. What is clear, however, is that the state of Michigan is keeping its own energy security—as well as the security of its inland waters—very much in mind.

The recent report by Public Sector Consultants (PSC) assessed the supply gap the state could face should Line 5 cease operation, causing feedstock shortages at the two key propane refineries that supply natural gas to the state. Located in Sarnia, Ontario, and Rapid River, Michigan, the plants are owned by Plains Midstream Canada (formerly BP Canada); the remainder of the propane is supplied by cottage-level producers around the state.

“The cumulative propane supplies jeopardized by an outage on Line 5 results in a shortfall of 230.1 million gallons of propane for the state of Michigan, the equivalent to 46% of statewide supplies,” the report stated. PSC added that the two facilities represent 87.6% of supplies for the Upper Peninsula and 42.9% for the Lower Peninsula.

But, critically, the report then points to ample replacements for the Line 5 supply. “PSC identified a number of robust and diverse alternative supply options for delivery to the Michigan market,” the report said. It identifies Edmonton as the most cost-effective source of propane for the Upper Peninsula (it would be “shipped via rail to Escanaba, Michigan, and subsequently transported to Rapid River by truck”), and estimates a premium of $0.04 per gallon over the going rate in 2019.

In an observation that may not land well with Line 5’s fossil-friendly proponents, PSC also found that “sensitivities around energy efficiency and utilization of customer storage…provide options for reducing the impact of supply disruptions, as well.”

Providing insight into the matter of alternative storage options for Line 5 is a 2018 report conducted by London Economics International (LEI) on behalf of the U.S. National Wildlife Federation. According to LEI, “Michigan has above-ground propane and propylene storage capacity of about nine million barrels (about 1.4 billion litres), as well as “large volumes of propane storage capacity in underground rock formations and caverns”—beyond ample capacity to compensate for the closure of Line 5. (A barrel of propane contains 31.5 U.S. gallons, so nine million barrels would exceed the state’s propane shortfall by more than 20%.)

The LEI study also provides critical insight into demand and supply patterns, both within Michigan and across the United States. While Michiganders do currently use more propane for residential heating than anyone else in the U.S., demand has been steadily falling with the rise of electric heat, which increased by almost 30% between 2009 and 2016—and will rise farther, faster if the country adopts an aggressive decarbonization strategy. A similar dwindling can be seen in the country at large.

Meanwhile, on the supply side, the shale revolution has left America awash in gas, with Pennsylvania, Kansas, and Ohio particularly flush. That’s good news for Michigan propane companies looking to source new product.

The LEI report also flags the possibility that the Utopia pipeline, which currently carries an ethane and propane mix from Ohio to Windsor, Ontario, “could in theory supply additional propane to Michigan,” particularly to the Lower Peninsula.

Overall, the LEI study found that using the Line 3 pipeline from Edmonton to Superior, Wisconsin, then trucking or railroading the rest would be the cheapest option for Michigan in the event of a Line 5 closure. The study concluded that Line 5 “can be decommissioned without any noticeable or significant economic impact to the State, citizens, or businesses,” with minimal cost increases to industry and consumers.

Together, the two reports put paid to the idea that shuttering Line 5 would leave Michigan with no choice but to freeze in the dark of winter.

This is not to say that the path to delivering propane to people’s homes in the absence of Line 5 is clear, nor will it be easy. Bridge Michigan recently observed that Governor Gretchen Whitmer’s administration “still won’t say exactly how Michigan will make up the difference” in time for next winter should the pipeline close in May.

That silence is making some local propane delivery companies nervous. Small distributor David Naser told Bridge that a broken supply chain at Rapid River would be a “disaster” for his company, which gets 100% of its propane from that terminal. Naser added that his business is in no position to purchase the trucks or hire the drivers that would become necessary if he had to source from farther afield.

Enbridge spokesperson Ryan Duffy was quick to nix any hope that the company consider continuing to deliver natural gas liquids to the Rapid River Refinery after a closure of Line 5. “You’re not going to run a whole pipeline, necessarily, just to deliver a tiny bit of propane, natural gas liquids, to a small market,” he said.

But it is the very fact that Line 5 delivers such a small—albeit critical—amount of propane to the Upper Peninsula that has environmentalists dismissing claims that any Michigan residents would be hung out to freeze. If there are challenges, said FLOW Executive Director Liz Kirkwood, they can be overcome, given the small number of households affected.

“We’ve got 15,000 households that use it. That’s basically the size of Muskegon,” she told Bridge.

What would be a big challenge is the devastation that would follow a Line 5 rupture in the Straits of Mackinac: “A 2018 analysis commissioned by FLOW valued the total economic and natural resource impact of a major spill at more than US$6 billion,” Bridge reports.

All this said, building a new propane supply chain for Michigan will take time. Working to facilitate the process, writes the Bridge, is a governor-appointed task force that has “recommended 14 steps the state can take to diversify [Upper Peninsula] propane sourcing, from incentivizing storage and encouraging rail investment to expanding assistance programs that help low-income families weatherize their homes and pay heating bills.”

The process does appear to be moving rather slowly. The Michigan Department of Transportation has hired a consulting firm “to research infrastructure upgrades needed to deliver propane to the U.P. by rail,” but work on the eight-month study is not expected to begin until early 2021. “If researchers begin in January they’ll finish their study just a month before the heating season begins,” Bridge notes.

But blaming the grinding wheels of bureaucracy for all the delays would be a mistake. While the commission has “stepped up its efforts to work with Michigan’s propane industry to identify any factors that might cause or contribute to a propane shortage or disruption,” said a spokesperson for the Michigan Public Service Commission, the fact that the propane market is largely unregulated means that “any response to changing conditions will be market-driven.”

The PSC and LEI reports also both note that the fossil industry closely guards its data, meaning that fundamental facts—like exactly what volume of propane comes courtesy of Line 5—can’t be quantified by researchers. That means there could “already be resources in the system that could be put to better use,” say shutdown supporters.

One of those supporters—Jim Lively, program director at the Groundwork Center for Resilient Communities—called predictions of infrastructural Armageddon a bluff.

“It’s just hard for me to imagine that this is that dire,” he told Bridge. In fact, he added, the price spikes that were foreseen when Line 5 actually did close down briefly last summer never came to pass.

On the Canadian side, shuttering Line 5 would leave Ontario about 45% short of the crude it requires to produce gas and diesel, reports the Globe, citing figures from Enbridge. A closure would also take out “100% of the jet fuel used at Toronto Pearson International Airport,” and cut feeds to the Line 9 pipeline that now supplies Quebec with 40 to 50% of its crude.

But as The Canadian Press reported in early February, the big fossils that process that crude have hardly been waiting around to see what happens next. Both Imperial Oil and Suncor Energy have been working on contingency plans to ensure that supplies to their refineries would continue. Imperial CEO Brad Corson told CP those plans include shipping crude in tankers through the St. Lawrence Seaway and by rail.

And Sarnia This Week reports that Suncor has increased its stake in the Portland–Montreal pipeline, which it will use “to import oil from Maine to Quebec and Ontario” if Line 5 is closed.

“We have this Portland–Montreal pipeline, which we now own exclusively, that allows us to bring waterborne crude into Montreal,” Suncor CEO Mark Little told an earnings call.

The company did not clarify how it would then get its crude from Montreal to Sarnia, which might involve some pattern of shipping along the Seaway and through the Great Lakes.

The Globe says O’Regan spoke to the reality of crude oil finding its way to refineries, by hook or by crook, noting that he “told MPs a shutdown would force Ontario and Quebec to find other sources of crude oil for refining and import this petroleum by rail or truck or ship—a potentially more dangerous and environmentally damaging method of transport.”

But  if O’Regan’s comments are placed alongside the 2018 report produced for the National Wildlife Federation and other arguments put forward by environmental organizations, two things become clear: Closing Line 5 does not threaten the energy security of either Canada or Michigan, and keeping the pipeline open does pose a profound environmental hazard to the Great Lakes watershed.

But so, apparently, will closing it, especially given Suncor and Imperial’s assumptions that they will be able to turn the Seaway into an open-air pipeline.

Which leaves local communities, and climate and energy campaigners everywhere, with one obvious and fundamental problem to deal with: not the method of shipping the Line 5 product, but the product itself.