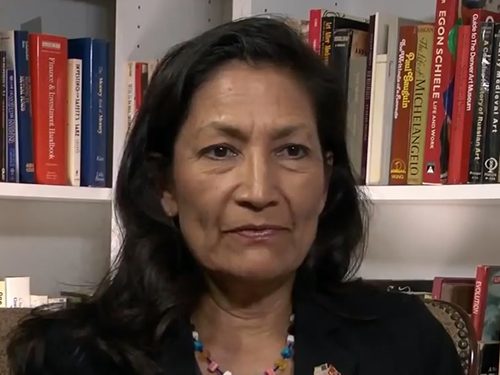 A committee vote by a U.S. Senate Republican and the political clout of First Peoples in Alaska have brought Rep. Deb Haaland (D-NM) one step closer to confirmation as the United States’ first Secretary of Interior of Indigenous origin.

The nomination must still go before the full Senate for approval. But with Senators Lisa Murkowski (R-AK), Susan Collins (R-ME), and Joe Manchin (D-WV) all signalling their support, the final vote appears all but certain to go in Haaland’s favour.

Confirmation would make Haaland the first Native American to head up a U.S. Cabinet agency, The Associated Press reports. “It is long past time to give a Native American woman a seat at the Cabinet table,” said Manchin, a conservative/moderate Democrat who chairs the Senate Energy and Natural Resources Committee.

A member of the Pueblo of Laguna tribe from New Mexico, Haaland will take over a “171-year-old institution that has often had a fraught relationship with the nation’s 574 federally-recognized tribes,” the Washington Post wrote when she was nominated in mid-December.

“At 15, she worked at a bakery, and later attended law school with the help of student loans and food stamps, occasionally experiencing homelessness as a single mother,” the paper added. “Now, after serving a single term in Congress, she will oversee a department that manages roughly one-fifth of land in the U.S.,” after promising “to transform the department from a champion of fossil fuel development into a promoter of renewable energy and policies to mitigate climate change.”

“A voice like mine has never been a Cabinet secretary or at the head of the Department of Interior,” Haaland tweeted after her long-rumoured nomination was confirmed. “I’ll be fierce for all of us, our planet, and all of our protected land.”

While the two days of confirmation hearings were under way, U.S. Indigenous communities were “gripped” by the proceedings, The Associated Press reported. More than just an elected official, “she is a sister, an auntie, and a fierce Pueblo woman whose political stances have been molded by her upbringing,” AP wrote. “Many Native Americans see Haaland as a reflection of themselves, someone who will elevate their voices and protect the environment and tribes’ rights.”

In the end, Haaland’s nomination passed by an 11-9 vote at Energy and Natural Resources, with Murkowski the only Republican to support her. “The committee vote could easily have been a tie that would have complicated Haaland’s nomination,” the Post writes. “Her opposition to new leases for drilling oil and gas on federal land made her a target for Republicans on the committee.”

“I have really struggled through this one,” Murkowski told the committee. “How to reconcile a historic nomination with my concerns about an individual’s and an administration’s conception of what Alaska’s future should be.” While Alaskans are extraordinarily proud of Haaland, she added, they’re also concerned about her “opposition to resource development on public lands, including her opposition to key projects in Alaska and her questioning of the vital role that Alaska Native Corporations serve in our communities.”

But in the end, it may have been the support of Alaska Natives, who make up about 20% of the state’s population, that swung Murkowski’s vote. They “came out in waves” to support her the last time she ran for Senate, the Post says, hoisting campaign signs for her in the bitter cold—and she’s up for re-election in 2022.

“We are a very diverse state,” Murkowski said in her committee statement “We’ve got many, many Indigenous peoples and cultures who have lived here, as they say, since time immemorial.”

So “I have decided to support this nomination today, to support the first Native American who would hold this position, and with the expectation that Rep. Haaland will be true to her word—not just on matters relating to Native peoples, but also responsible resource development and every other issue,” she added. “I am going to place my trust in Rep. Haaland and her team, despite some very real misgivings.”

Sen. John Barrasso (R-WY), the Republicans’ ranking member on the panel, was rather less collegial in his remarks.

“I, along with other Western senators, have consistently opposed nominees who hold such radical views,” he said, citing Haaland’s support of the Green New Deal, her opposition to lifting protections for grizzly bears, and her opposition to the Keystone XL pipeline. “Haaland’s extreme policy views” and “lack of substantive answers…to me disqualify her for the job,” he added.

That kind of treatment reflected a clash of “two powerful forces, with very different attitudes to the climate crisis,” The Guardian wrote late last month, while Haaland’s confirmation hearings were still under way. “The battle lines between the fossil fuel industry and the activists and environmentalists opposed to it have been starkly drawn in the fight for Haaland’s nomination.”

“I almost feel like your nomination is a proxy fight over the future of fossil fuels,” Maria Cantwell (D-WA) told the nominee.

The Guardian wades into some of the campaign finance records behind the story, pointing to Barrasso’s lifetime total of nearly US$1.2 million in fossil fuel donations, along with $1.7 million to Sen. Bill Cassidy (R-LA), $366,000 to Sen. Mike Lee (R-UT), and $288,500 to Sen. Steve Daines (R-MT). “Will your administration be guided by a prejudice against fossil fuel, or will it be guided by science?” Cassidy asked Haaland. [Interesting: Of the two either/or answers he offered, Cassidy didn’t give Haaland an option that supported his industry patrons—Ed.]

After Manchin said he would support Haaland, on her assurances that fossils won’t be “immediately jettisoned in order to tackle the unfolding climate crisis,” The Guardian said the Republicans’ loud opposition wouldn’t be enough to sink the nomination. But the fight “highlights the enormous political challenge of rapidly shifting the U.S. away from oil, coal, and gas towards cleaner forms of energy to avert ever more disastrous heat waves, flooding, wildfires, societal unrest, and other maladies.”

Republicans “have signaled they will fiercely enforce a status quo,” the paper added. “Opposing them is a broad coalition of environmental, youth, and Indigenous rights groups, along with the progressive wing of the Democratic party, who see Haaland’s historic ascent as a pivotal moment to confront longstanding environmental, economic, racial, and social inequities.”

During the hearing, Republicans steadily attacked Haaland for the Biden administration’s various positions on fossil fuels. The Washington Post had the details.

“The state of Wyoming has collected over a billion dollars annually in royalties and taxes from oil, gas, and coal produced on federal lands within our borders, and Wyoming isn’t the only state that benefits from [fossil] energy production on public lands,” Barrasso said. “We shouldn’t undermine America’s energy production and we should not hurt our own economy. Yet that’s precisely what the Biden administration is doing by signing an executive order to ban all new oil, coal, gas leases on federal lands.”

That position echoed the “stunned”, “aghast” reaction from U.S. fossils when Biden ordered a pause on new leases in late January—even though, as Inside Climate News pointed out at the time, the companies already had access to 23 million acres/9.3 million hectares on land and offshore.

Through the onslaught, Haaland “remained calm, stressed that she wanted to work with supporters and opponents alike, and kept her answers short,” the Post wrote. She “sought to defuse aggressive questions from Republicans by reminding them that she was named the most bipartisan freshman congresswoman during her first term in the House as a Democrat from New Mexico, a seat to which she was re-elected in November.”

But for all their concern for the fossil industry, The Huffington Post notes that not one Republican stopped to ask Haaland about her vision for Indigenous communities. “Elected tribal leaders, intertribal organizations and hundreds of green and progressive groups have celebrated her historic nomination as an important step toward confronting the U.S. government’s ugly history toward Indigenous peoples and rebuilding relations with them,” HuffPost writes. But in the course of her two-day confirmation hearing, “not a single Republican on the panel inquired about her vision for supporting tribal sovereignty and empowering Indigenous communities.”

IllumiNative founder and executive director Crystal Echo Hawk, an enrolled member of the Pawnee Nation of Oklahoma, said the hearings made Republicans’ priorities clear. “They were only interested in furthering their agenda to ensure Rep. Haaland would continue to allow extractive industries to have free rein over the department,” she told HuffPost in an email. “It is a reflection of what they fear about [her]—she is not beholden to the oil and gas industry as they are.”

But the limited questioning was a huge gap, given the agency’s reach and its importance in the lives of First Peoples. “While the Interior Department is best known for managing 500 million acres of federal land―including the 63 national parks―and setting policies that govern natural resource exploitation, its portfolio is much larger,” HuffPost explains. “It’s responsible for managing water resources across the West, reclaiming abandoned mine sites, and protecting and recovering endangered species. And it’s in charge of the Bureau of Indian Education, which funds and operates more than 180 tribal schools, as well as the Bureau of Indian Affairs.”

Despite the storm and fury during her confirmation hearings, Haaland isn’t nearly as “radical” as Republicans on Senate Energy and Natural Resources seem to think. In 2019, she introduced 13 House bills with bipartisan sponsors, Grist writes. “Dozens of lawmakers, some of them Republicans, say she is a good collaborator and an excellent champion of public lands,” and “she has a 98% lifetime score from the League of Conservation Voters, a mainstream environmental advocacy group.”

Grist adds that, “for some Indigenous environmental advocates and Democrats, the opposition to Haaland’s nomination smacks of racism and a resistance to progress.”

Haaland “is a Brown, traditional Indigenous woman who cares about the land and future generations,” said Indigenous Environmental Network organizer Ashley McCray, a member of the Absentee Shawnee and Oglala Lakota Nations. “At the foundation of that, she is unsettling settler colonialism, which is really what the United States government is.”

Other nominees of colour received similar treatment in their Senate confirmation hearings, the Post wrote.

In an opinion piece for USA Today, first cousins Mark and Tom Udall, former Democratic senators for Colorado and New Mexico, agreed the wall of opposition to Haaland was based on “something other than her record.”

“Were either of us the nominee to lead the Interior Department, we doubt that anyone would be threatening to hold up the nomination or wage a scorched earth campaign warning about ‘radical’ ideas,” they said. “Her record is in line with mainstream conservation priorities.”