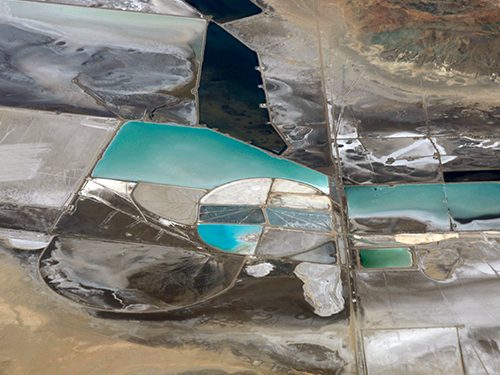 Despite widespread assumptions, lithium and rare earth minerals like coltan—and all the environmental and social harms that attend their extraction and use—are not necessarily essential to the green energy transition, says a new book on building a climate-friendly economy.

After coming up against naysayer after naysayer who told him electric vehicles cannot be a viable solution because there aren’t enough minerals and their extraction is too harmful, author and activist Jonathan Neale decided to learn for himself, he explains in a recent post for Climate & Capitalism.

“What I found out is that the transition will be possible, but neither the politics nor the engineering is simple,” he writes. Ensuring that the quest to electrify the world does not further ravage ecosystems and, especially, Indigenous communities will involve changing some pretty hard-wired economic and political attitudes.

But lithium mining is toxic due to the acids used in the extraction process, and mining it consumes huge amounts of water. That lithium mining is such a thirsty process is a particularly dire problem given that most of the world’s lithium brine deposits are found in the already arid highlands of Argentina, Chile, and Bolivia.

Such acid pollution and water depletion are together making the ancestral homelands of the Indigenous peoples who live in those countries “unlivable,” writes Neale.

But there several ways out of this unsustainable path. One option is to mine the mineral from hard rock, rather than brine deposits. Both China and the United States could be significant players in this field, Neale writes, but hard rock mining is a lot more expensive than extraction from concentrated brines.

EV manufacturers could also choose to make batteries without lithium. “In January 2020, the U.S. Geological Survey listed the metals that could be substituted for lithium in battery anodes as calcium, magnesium, mercury, and zinc.” EV manufactures have embraced lithium because the mineral allows them to build a lighter, cheaper, longer-lasting battery with a greater range.

More broadly, Neale says the tendency to view EV mineral extraction through the lens of economic costs alone plagues the entire “rare earth” mineral business—which deals with a group of elements that are not actually so rare. “They are found in many places, all over the world,” he explains, but are referred to as “rare” because they are typically found in low concentrations, making them expensive and harmful to mine.

“If unregulated, the pollution is intense,” Neale writes.

But removing these metals from our smartphones and laptops wouldn’t mean they couldn’t function—it would just mean slightly lower resolution and slightly larger devices. “We have established that batteries do not have to be made out of lithium,” he writes. “Other materials are available. We have established that shortages of lithium do not mean we have to give up on the prospect of all vehicles being electric. Other kinds of batteries can be used. Lithium can be mined from other parts of the world.”

But still, Indigenous groups in South America continue to fight against lithium mining in their homelands, to no avail. In Bolivia, writes Neale, efforts by former president Evo Morales to take domestic control over the country’s considerable untapped lithium reserves did not gain the support of “global capital, Tesla, the big banks, and the World Bank.” An Indigenous socialist, Morales led his country from 2006 to 2019, when a U.S.-backed coup overthrew his government. The machine, it seems, does not want to change course.

“Is it naïve to think we can do anything about that?” asks Neale. The answer could lie in the creation of a global web of public sector climate service forces acting in solidarity with resource workers, from the lithium mines of Argentina to the coltan mines of the Democratic Republic of Congo.

In Neale’s proposed world, “an appeal for solidarity from Indigenous people in a river valley somewhere could easily lead workers 8,000 miles away to tell their management: ‘We will use lithium from somewhere else. Or another material. Or hydrogen fuel cells. We are not working with lithium that has blood on it’.”

Social Cost of Carbon ‘Puts a Number on Climate Damage’