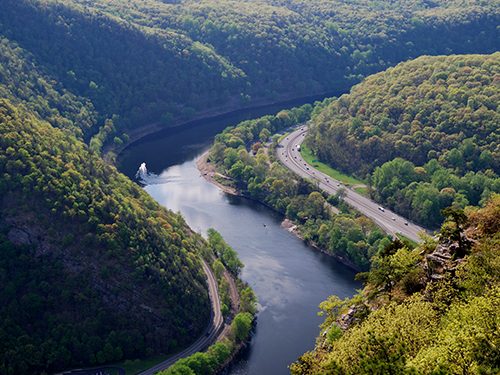 In the face of vociferous opposition from natural gas interests, an interstate commission has voted to put a permanent stop to fracking in the Delaware River Basin.

“Little known but powerful,” the Delaware River Basin Commission (DRBC) voted 4-0 (with one abstention) to make a temporary de facto ban on fracking in the basin permanent, writes Grist. The commission comprises the governors of Delaware, New Jersey, New York, and Pennsylvania, with federal representation from the U.S Army Corps of Engineers.

A 35,065-square-kilometre area stretching from the Catskills of New York to Delaware Bay on the Atlantic coast, the basin has been under the protection of the DRBC since the commission was founded in 1961 by then-president John F. Kennedy. The DRBC’s own website describes the lower reaches of the Delaware River as being “an open sewer” at the time of the commission’s inception.

What makes the ban possibly “the biggest anti-fracking milestone in the Northeast to date,” writes Grist, is that outlawing fracking in the basin effectively shuts out the industry from a significant chunk of the natural gas-rich Marcellus Shale formation.

Not so with Pennsylvania. The seven of its counties that are found within the Delaware Basin sit directly over the Marcellus, home to trillions of cubic feet of the fossil fuel.

Predictably, natural gas interests are “livid” about the ban, expressing particular dismay that the Army Corps of Engineers representative abstained from voting, citing the absence of direction from the Biden administration.

“This vote defies common sense, sound science, and is a grave blow to constitutionally protected private property rights,” said Marcellus Shale Coalition President David Callahan in a statement. “We were hopeful that President Biden would keep his vague commitment to not ban fracking, as he told Pennsylvania voters over and over.”

While a lawsuit launched in 2016 by landowners in one of the Pennsylvania counties that now falls under the fracking ban is still before the courts, it won’t have the support of state governor Tom Wolf (D), writes Grist. In a statement at the hearing, Wolf said he was “proud to join with other DRBC commissioners in preserving the water resources of this unique region for generations to come.”

Celebrating a ban that has been 10 years in the making, Wes Gillingham, associate director of the environmental group Catskill Mountainkeeper, told Grist that it was “a wonderful thing” to have been involved in protecting “one of the most pristine ecosystems on the East Coast.”