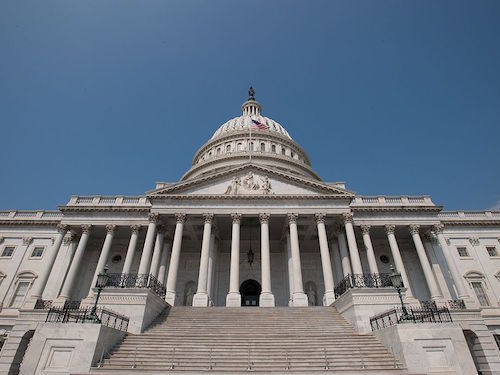 The United States would cut its greenhouse gas emissions 50% from 2005 levels by 2030 and count on a clean electricity standard to achieve a 100% clean energy grid by 2035 under legislation reintroduced this week by Democrats in the U.S. House of Representatives.

“Today’s introduction of the CLEAN Future Act promises that we will not stand idly by as the rest of the world transitions to clean economies and our workers get left behind, and that we will not watch from the sidelines as the climate crisis wreaks havoc on Americans’ health and homes,” said House Energy and Commerce Committee Chair Frank Pallone (D-NJ).

The bill “would require all retail electric providers to generate 100% of their power from zero-emissions resources by 2035, and 80% by 2030,” Utility Dive reports, with provisions for utilities to generate more renewable power or buy clean energy credits beginning in 2023. “It would also require the Federal Energy Regulatory Commission to update U.S. transmission policy in order to better integrate renewables onto the grid, and direct greater investment in energy storage, microgrids, distributed energy resources, and more.”

The bill explicitly declares “that it is the policy of the United States that a modern transmission system should facilitate a decarbonized electricity supply to enable GHG emissions reductions, and that the public interest is served by reducing barriers to transmission investments that enable clean energy resources deployment,” Utility Dive says.

The US$565-billion, 10-year program includes $500 million for electric vehicle charging stations and other equipment and $2.5 billion per year to shift the U.S. school bus fleet to zero-emission vehicles, The Hill writes. It lays out energy efficiency targets and standards for buildings and directs “more funding for energy efficiency in schools, homes, non-profits, and infrastructure.”

“Building codes would require zero-energy-ready buildings, or buildings that produce enough renewable energy to meet their own annual energy consumption requirements, for new and existing buildings by 2030,” Utility Dive adds.

Consistent with Biden’s promises on the campaign trail and early commitments in the White House, the legislation also earmarks 40% of funding for communities facing environmental inequality. Pallone told media a concern for environmental justice was also one of the reasons to introduce a clean electricity standard, rather than relying on carbon pricing or other market-based measures to reduce emissions.

“It’s time to try something new,” he told media. “There’s also a lot of environmental justice concerns for allowing companies to pay to continue polluting.”

The bill, introduced by Pallone and Reps. Paul Tonko (D-NY) and Bobby Rush (D-IL), “would prevent air pollution permits from being issued or renewed in areas that already face disparate pollution impacts and would create a new program to pay for the removal of lead service lines and replace them with iron and steel,” The Hill says. “It would also create a program to give aid to local governments that lose revenue as a result of the net-zero transition,” while setting a 10-year deadline to clean up hazardous waste sites that are vulnerable to climate disruption.

While Earthjustice greeted the announcement with “applause” and the Natural Resources Defense Council called it “urgently needed”, other U.S. climate organizations pointed to gaps they saw in the legislation, Common Dreams reports.

“Chairman Pallone had over a year to remove fossil fuels from the CLEAN Future Act and didn’t bother to reconsider,” said Friends of the Earth U.S. Program Manager Lukas Ross, referring to an earlier version of the bill. “A clean energy standard that qualifies fracked gas is a joke. We need real solutions like solar and storage, not a dirty lifeline for gas, nukes, and biomass.”

The latest version of the bill “improves on last year’s abysmal proposal,” said Brett Hartl, government affairs director at the Center for Biological Diversity. But the U.S. needs to “slash emissions 70% in 10 years, and we need firm cuts in greenhouse gases right now, not just gimmicky incentives, or future generations will suffer from our inaction today.”

“While this bill has been marginally improved, it fails to grasp the fundamental truth of fighting climate change: We must stop extracting and burning fossil fuels as soon as possible,” agreed Mitch Jones, policy director at Food & Water Watch. “We should not waste time creating credit schemes and offsets markets, or prop up fossil fuels with carbon capture fantasies.”

The Hill has an initial look at the polarized politics that await the bill on Capitol Hill.