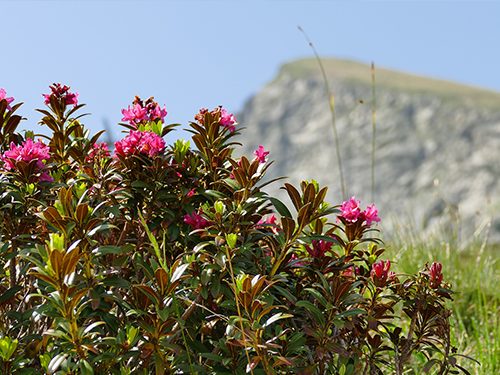 The early melting of snow in the Alps is not just bad news for ardent skiers and for those who are dependent on the money they earn during the winter sports season: Alpine plants are in danger, too.

Rising temperatures due to climate change are also having a negative impact deep below the surface of the ground.

New research by scientists at the University of Manchester in the UK demonstrates that warming in the area is threatening microbes which live in the Alpine soils.

The microbes play a critical role in supporting life forms above ground, recycling key nutrients upon which animals, plants—and humans—depend.

The microbes also control the amount of carbon stored in the soil: if the cycle of microbial activity is disrupted, then more carbon is released into the atmosphere, resulting in further global warming.

Arthur Broadbent, lead author of a research paper in the ISME Journal, says climate change is having an alarming impact on microbial communities in Alpine soils.

During the winter, microbes in those soils depend on snow to act as an insulating blanket, allowing them to continue to work throughout the cold months. But “using a high-alpine experiment in the Austrian Alps, we discovered that spring snowmelt triggers an abrupt seasonal transition in soil microbial communities, which is closely linked to rapid shifts in carbon and nitrogen cycling,” he said.

The researchers say climate change in the Alps is taking place at double the global average rate. Separate research indicates that profound changes are happening in the Alps and in many other mountainous regions around the world.

In February, a flash flood in Uttarakhand in northern India killed nearly 70 people, with 136 more missing and now presumed dead. Most scientists believe the warming climate was the cause of the glacier melt which triggered the disaster.

There are predictions that over the next 80 years more than 90% of glacier ice in the Alpine region will be lost due to ever-rising temperatures.

“Snowmelt is predicted to occur 50 to 130 days earlier in alpine regions due to climate change by the end of the century,” Broadbent said.

“Using experimental manipulations, we demonstrated that earlier snowmelt, of even just 10 days, leads to an earlier seasonal transition in microbial communities and biogeochemical cycling.”

The research paper says changes in the microbial cycle caused by snow melt will result in less carbon being retained in the soil and so have a negative impact on the growth and productivity of plants.

“This would negatively affect agricultural production and disrupt natural ecosystems. It will also alter annual carbon fluxes in these ecosystems with the potential to cause further climate warming.”

The authors conclude with a clear warning: “More extreme advances in snowmelt timing are forecast for the end of the century.” – Climate News Network

Siemens Exec Pitches Hydrogen for Air Travel, with a Side of Captured Carbon