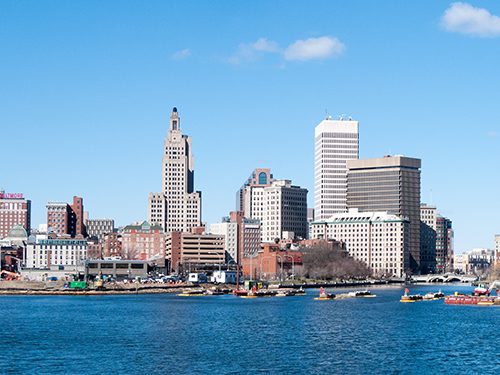 The iconic 1928 “Superman” building is just one of many heritage treasures to be found in the 385-year-old Rhode Island city of Providence. Now, a local preservation society has moved to place the entire city on its annual “most endangered properties” list, citing sea level rise and storm surge risk.

“Every year, the Providence Preservation Society solicits input from the community to determine the most endangered buildings in the Rhode Island capital,” writes Inside Climate News. Intended to raise the profile of landmarks that are rich in history but slowly crumbling from neglect or outright abuse (and sometimes both), this year’s Endangered Properties list includes them all: the vacancy-plagued Industrial Trust Building known for its resemblance to the Daily Planet offices from the Superman comics; the Grace Church Cemetery (1834), which is regularly attacked by vandals; the “virtually abandoned” Broad Street Synagogue (1910); and many buildings in Providence’s famous jewellery district, many dating from the early 19th century, and all under threat from “insensitive development” if not outright demolition.

When she first saw the proposal to add the whole city to the list, “I had to scratch my head a little bit at the thought,” said Rachel Robinson, the society’s director of preservation. But then, she told Inside Climate, she reread the proposal and thought, “No, this is exactly what we need to do to be more explicit about wedding preservation and sustainability.”

Robinson said she hoped the listing would kickstart local conversations about the common ground between loving old buildings and loving Providence, and, by extension, the environment that sustains us.

“Most of us live in and use older buildings and that should be part of the solution, not part of the problem,” she said.

The Rhode Island capital faces extensive climate risks, and the Society pulls no punches in laying them out. “We are a river city in the Ocean State, and the impacts of climate change and sea level rise will affect Providence’s built and cultural heritage in both incremental and profound ways,” the organization writes on its website.

Citing the increasing threat of severe storms and storm surges, the Society also attests to a collective communal experience of “the incipient symptoms of climate change; among them are disease, disruption to food production, and environmental injustice.”

The endangered properties program also points to the good things happening in town. For example, while it describes one part of the Providence River waterfront as “a poster child for the detrimental effects of industry and pollution,” it praises the sustainability-focused development of another section as “a harbinger of green energy and habitat restoration.”

Applauding both the Providence Preservation Society and the community member who requested the wide-ranging nomination, Mayor Jorge Elorza said the climate crisis goes far beyond the environment.

“It will impact every facet of our lives, and we all must play a role in preventing this human-made crisis,” he said.