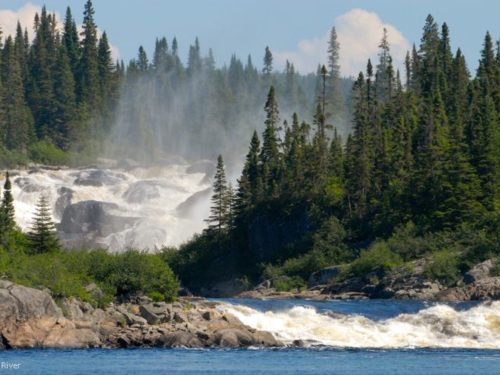 With its kilometres of rapids and deep blue waters winding through Quebec’s Côte-Nord region, the Magpie river has long been a culturally significant spot for the Innu of Ekuanitshit.

Now the river, a majestic, world-renowned whitewater rafting destination, has been granted legal personhood status in a bid to protect it from future threats, such as hydroelectric development. Its new status means the body of water could theoretically sue the government.

On February 16, the regional municipality of Minganie and the Innu Council of Ekuanitshit adopted separate but similar resolutions granting the river nine legal rights, including the right to flow, to maintain its biodiversity, and the right to take legal action, The Canadian Press reports.

One of the resolutions says the river can be represented by “guardians” appointed by the regional municipality and the Innu, with “the duty to act on behalf of the rights and interests of the river and ensure the protection of its fundamental rights.” It notes the river’s biodiversity, importance to the Innu, and potential as a tourism destination as reasons why the body of water needs special protection.

Pier-Olivier Boudreault, a conservation biologist with the Quebec branch of the Canadian Parks and Wilderness Society, says the move is rooted in the belief that the river is a living entity that deserves rights. “The idea is that the river is living, that it has an existence that doesn’t depend on humans,” he said in a recent interview.

“It’s not a simple resource for humans,” he added. “It becomes an entity that has a right to live, to evolve naturally, to have its natural cycles.”

Boudreault says the new designation for the Magpie is the first time a river has been granted legal status in Canada. Similar efforts have been successful in countries like New Zealand, India, and Ecuador.

David Boyd, an environmental lawyer and United Nations special rapporteur on human rights and the environment, told CP the idea of granting rights to a river isn’t as far-fetched as it might seem. “In our legal system, we declare lots of things to have legal personhood, like municipalities and corporations,” he said.

He said the “environmental personhood” movement is a response to the belief that successive governments around the world have failed to adequately protect the environment, as well as to the growing recognition of Indigenous peoples’ rights and their legal concepts.

While this is new in Canada, he said the resolution “could have quite a bit of strength” because of the constitutional protection of Indigenous rights. “In theory, you could have a lawsuit brought on behalf of the river to prevent a hydroelectric project from taking place,” he said.

Uapukun Mestokosho, a member of the Innu community who has been involved in the Magpie river conservation effort, said the river is an important part of the traditional territory of the Innu of Ekuanitshit.

For some, spending time on the river is a way to reconnect to traditional land-based practices that were partially abandoned because of the trauma suffered by Indigenous people from colonial violence, including the residential school system.

“People are suffering a lot, with intergenerational traumas linked to the past,” said Mestokosho, who described occupying the territory as “a form of healing.” Mestokosho said her ancestors have always protected the Magpie, known as the Muteshekau-shipu, and that recognition of the river’s rights will allow them to protect it for future generations. She and Boudreault agreed the biggest threat to the Magpie is likely to come from the province’s hydro utility, which has raised the possibility of damming the fast-flowing river.

Hydro-Québec insists it has no plans for the Magpie in the “short or even medium term” and that no plans are “even foreseeable” in the next decade. “But in the long term, we do not know what Quebec’s future energy needs will be,” spokesperson Francis Labbé wrote in an email to CP.

“Right now, we do not consider it responsible, in terms of Quebec’s energy security, to permanently renounce to the potential of this river.” Any future project would have to meet several criteria, including social acceptability, he noted.

Boudreault said the Innu, members of the regional government, and other environmental activists haven’t given up on lobbying the Quebec government to grant the river official protected status. He said he thinks the province has been reluctant to commit to the idea, mostly because of the river’s potential for hydroelectric power.

This report by The Canadian Press was first published February 27, 2021.