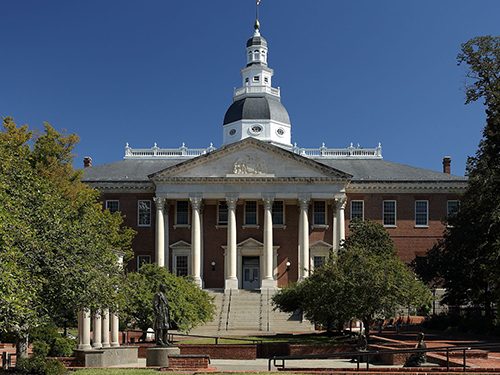 Annapolis, Maryland, has launched a lawsuit against 26 fossil companies—including heavyweights ExxonMobil, Chevron, BP, and Shell—in a bid to hold the industry liable for its decision to pursue fossil fuel development despite full knowledge of the environmental consequences.

The 40,000-strong state capital “will argue the companies violated the Maryland Consumer Protection Act and five other actions, including public and private nuisance, negligence, failure to warn, and trespass,” reports the Capital Gazette. “The suit also noted a litany of negative consequences as a result of the defendants’ conduct, including inundation and loss of private, public, and historic property, lost tax revenue, increased costs of maintaining public infrastructure, and additional costs for planning and preparing for resiliency as a result of climate change.”

At a news conference to announce the court action, Annapolis Mayor Gavin Buckley pulled no punches. “The fossil fuel industry knew for the past 50 years that their industry was pushing the environment to a tipping point where combatting climate change would become progressively difficult,” he said. “The companies worked to deceive people of the danger, hiding their knowledge and engaging in an intentional campaign to mislead the public about the science.”

Annapolis is not the only Maryland authority going after the fossil industry. The Gazette reports that Anne Arundel County, within which Annapolis is located, “is also considering similar litigation against oil and gas companies.” Both Annapolis and its county will be retaining San Francisco-based climate litigation firm Sher Edling LLP.

For Annapolis, the climate crisis puts millions of dollars in tourist-generated revenue at risk. “Climate change and rising sea levels are a direct threat to the Annapolis Historic District,” explains the Gazette. “In 2019, flooding occurred 65 times at City Dock. That number is expected to increase drastically in the coming decades.”

City officials estimate that, by 2040, Annapolis will have spent US$45 million, or more than $1,150 per capita, building a sea wall to try to protect against rising sea levels and storm surges.

“Mitigating the impacts of climate change is expensive. We would not have to spend the kind of money we are forced to spend but for the actions of the fossil fuel industry,” Mayor Buckley told the Gazette. “This lawsuit shifts the costs back to where they belong, on those whose knowledge, deception, and pursuit of profits brought these dangers to our shores.”

Quebec River is First in Canada to Gain ‘Legal Personhood’