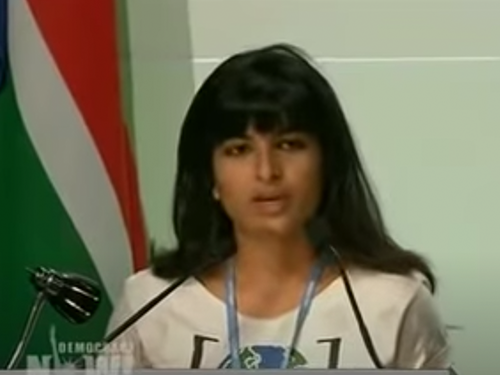 Just over nine years ago, at the closing plenary of COP 17 in Durban, South Africa, climate youth delegate Anjali Appadurai delivered a transfixing speech, excoriating world leaders for their failure to follow through on their climate action pledges. Her words as she spoke them on December 9, 2011 were an advance echo of the ambition gap the UN identified in Friday’s NDC synthesis report.

“I speak for more than half the world’s population. We are the silent majority. You’ve given us a seat in this hall, but our interests are not on the table.

What does it take to get a stake in this game? Lobbyists? Corporate influence? Money? You’ve been negotiating all my life. In that time, you’ve failed to meet pledges, you’ve missed targets, and you’ve broken promises.

But you’ve heard this all before.

We are in Africa. Home to communities on the front line of climate change. The world’s poorest countries need funding for adaptation, now. The Horn of Africa and those nearby in KwaMashu needed it yesterday. But as 2012 dawns, our Green Climate Fund remains empty.

The most stark betrayal of your generation’s responsibility to ours is that you call this ‘ambition’. Where is the courage in these rooms? Now is not the time for incremental action. In the long run, these will be seen as the defining moments of an era in which narrow self-interest prevailed over science, reason, and common compassion. There is real ambition in this room. But it’s being dismissed as radical; deemed not ‘politically possible’.

Stand with Africa. Long-term thinking is not radical. What’s radical is to completely alter the planet’s climate, to betray the future of my generation, and to condemn millions to death by climate change.

Common but differentiated and historical responsibility are not up for debate.

Respect the foundational principles of this convention. Respect the integral values of humanity. Respect the future of your descendants. Mandela said, ‘It always seems impossible until it is done.’

So, distinguished delegates and governments around the world, governments of the developed world: Deep cuts now. Get it done!”

Anjali Appadurai is currently a climate justice campaigner with Sierra Club BC.