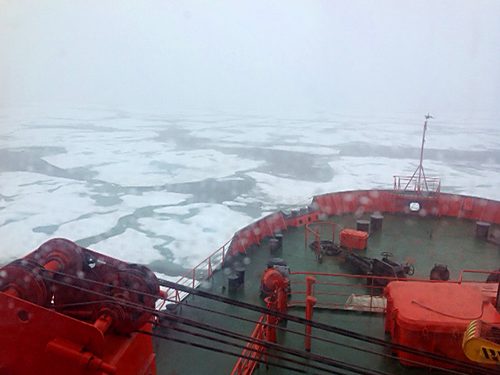 Since the New Year, an LNG tanker has twice navigated the Northern Sea Route—a feat that until recently would have been impossible in mid-winter. While some see the opening of the passage as a worrying sign for the climate, others are salivating at the thought of a new frontier for commerce.

Bloomberg Green lays out the case for worry, confirming that the Arctic is warming “more than twice as quickly as the rest of the world, and the area covered by ice there has reached historic lows multiple times over the past 12 months.”

Between 1994 and 2017, 28 trillion tonnes of ice were lost globally (a mass sufficient to cover all of the UK in a 100-metre-thick ice sheet, notes Bloomberg). That loss is “in line with the worst-case climate scenarios outlined by scientists.”

Stretching more than 5,550 kilometres from the Kara Sea off the north coast of Russia to the Bering Strait, the Northern Sea Route has long been known to be the shortest passage between Europe and Asia, but shipping potential was limited by the fact that the route became blocked by thick ice in winter.

But the recent experimental voyage of the Christophe de Margerie, an LNG tanker that left Russia fully loaded in early January bound for China, has proven its viability. The ship returned to its home port last week, this time accompanied by the nuclear-powered 50 Let Pobedy icebreaker (no icebreaker was needed on the trip out).

The voyage was the second in the past 10 months for the tanker, which made the identical trip in May, a month earlier into spring than normal.

For Yury Trutnev, Russia’s deputy prime minister and a member of the supervisory board for the state-owned nuclear corporation that manages the route, the trip—and the ice loss that allowed for it—heralds economic potential. “I am confident that changes in the ice situation and the improvement of marine technologies create new conditions for its development,” he told Bloomberg.

Likewise looking ahead to the opportunity that lies in the further collapse of the Arctic sea ice is Russia’s largest LNG producer, Novatek PJSC. That company is contemplating an early start to its shipping season this year—with plans to launch as early as May or April.