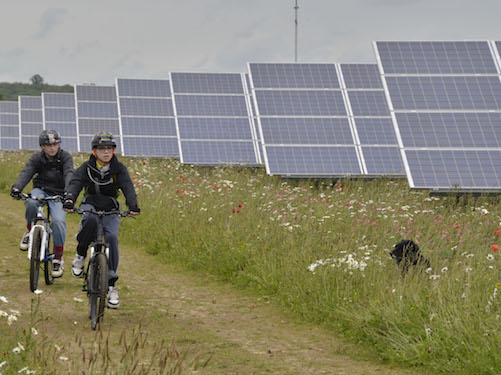 A modelling study published earlier this month by three U.S. organizations breaks down the state-by-state benefits the country can expect from the drive to a net-zero economy by 2050.

The Decarb America report, released February 4 by Third Way, the Clean Air Task Force, and the Bipartisan Policy Center, features a set of interactive maps that show the infrastructure and investment each state will need, in five-year increments, to hit the mid-century target, Greentech Media reports. Of particular note, in light of the devastating disaster the state has encountered in the two weeks since the release, is that Texas emerges as a “prime example” of a shift from oil and gas to wind, solar, and zero-carbon fuel production.

More broadly, the nine scenarios in the report “share a common need for a massive build-out of wind and solar power and electrifying transportation and building heating, as do most previous studies,” Greentech says. They differ “in their assumptions of how quickly renewables will be able to grow and whether consumers will take up electric vehicles and building electrification technologies.”

That range of possibilities, in turn, “guides how much reliance might be placed on alternative decarbonization technologies such as biomass and carbon-neutral biofuels, zero-carbon fuels such as green hydrogen, advanced nuclear power, and carbon capture and storage.”

A key takeaway from the report “is that infrastructure and clean energy industry growth isn’t restricted to the set of largely East and West Coast states, such as California and New York, that have taken the most aggressive decarbonization policy actions to date,” Greentech writes, citing lead author Lindsey Walter, deputy director of Third Way’s climate and energy program. “Even the states most reliant on fossil fuel extraction and production today have opportunities for growth in key clean energy industries to make up for losses in those sectors.”

“The midcontinental regions play a significant role,” Water told Greentech’s Jeff St. John, with “high-quality wind resources” that could be exported or co-located with hydrogen production. Farm belt states can use “abundant agricultural resources as biomass feedstocks,” while industrial Rust Belt states have “the opportunity to build new carbon capture industries for steel and cement.”

While the opportunities vary from one jurisdiction to the next, she added, “lots of states that are energy producers today remain energy producers” in the 2050 scenarios.

St. John points to the political opposition the report could run into—in Republican-dominated states, and in a divided U.S. Senate where coal state senators Joe Manchin (D-WV) and John Barrasso (R-WY) are chair and ranking member, respectively, of the powerful Energy and Natural Resources Committee. Walter stressed that the organizations behind Decarb America were not asking legislators to pick any one of the nine scenarios they’d developed.

“You can look at the trade-offs in the different scenarios to help inform those different conversations,” she told Greentech. “But it’s ultimately up to the policy-makers which of these pathways we want to pursue.”

Key Passage in IPCC’s 1.5°C Report Cited as ‘Most Important Sentence Ever Written’