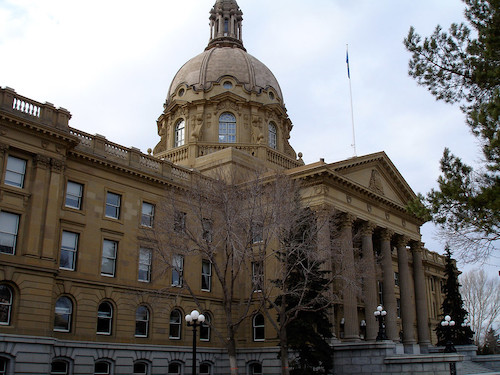 A business council with representation from virtually all the major fossil companies in Alberta is calling on the Jason Kenney government to introduce a provincial sales tax and reinstate a consumer carbon tax.

Any mention of a provincial sales tax has been anathema to generations of Alberta politicians, and a promise to rescind the carbon tax was one of Kenney’s signature campaign promises in the 2019 provincial election. But now, the call is coming from the Business Council of Alberta, whose membership list includes the presidents or chief executives of ARC Resources, Canadian Natural Resources Ltd., Cenovus Energy, Enbridge Inc., MEG Energy, Ovintiv, Shell Canada, Suncor Energy, TC Energy, Tourmaline Oil, and TransAlta Corporation, among many others.

The council’s board chair, Hal Kvisle, is a member of the Canadian Petroleum Hall of Fame and former president and CEO of TransCanada Corporation (now TC Energy) who chairs ARC Resources and sits on the Cenovus board.

That’s the august group that has now concluded that “Alberta overspends and undertaxes, which has resulted in a $40-billion debt,” CBC reports. “Over the years, the province has been able to get away with it due to resource royalties from oil and gas companies; however, the council says this reliance has now caused a problem.”

The report concludes that Alberta spends about 11% more per person each year than other provinces, while collecting 7% less in tax. (No word on how much of the additional spending is made up of fossil subsidies, or how much of the revenue gap could be recovered by properly assessing oil and gas royalties.)

“For the past three decades, volatile resource revenues usually covered that gap,” the council says in a release. But over the last five years, most of it has been funded by provincial debt. As a result, “in the past 12 years, the Alberta government has gone from having net assets of $50 billion, to a net debt of $40 billion—a swing of $90 billion, before COVID.”

To fully close the gap, the province would have to raise taxes by 34% or cut costs by 27%.

“Simply bringing expenses in line with other provinces will not be enough to solve the challenge,” the release states. “Alberta must meet in the middle, addressing both revenues and expenses. Alongside expense reductions, Alberta needs a re-imagined revenue model that is right for our times, including a discussion of two key revenue options: a harmonized sales tax and provincial consumer carbon tax.”

Business Council Chief Economist Mike Holden acknowledged a provincial sales tax wouldn’t be popular. But “most Albertans wouldn’t want us to cut our way to fiscal sustainability, so we have to take a look at what we can do on the revenue side,” he told CBC. “Given the trajectory of resource revenues in the province, we can’t really rely on them in the future. And so hoping that they rebound isn’t a plan.”

He added that reinstating the provincial carbon tax would restore revenue that is now being collected by Ottawa, while showing the investment community a greater seriousness about cutting carbon pollution. “If the province sort of repatriates that carbon tax, it provides a large cash influx into provincial government coffers, and then we can have a discussion about what we actually do with that money,” he said.

Earlier this month, the Globe and Mail attributed the slowdown of Alberta’s “fiscal gusher” to the years-long drop in global oil prices.

“There’s an immediate impact: profits evaporating, corporate taxes withering, and royalty payments dwindling,” the paper wrote. And companies’ recent decisions to write off some of the value of their fossil fuel assets point to the longer-term risk the province faces.

“The companies haven’t explicitly linked their decisions to climate change and decarbonization,” the Globe wrote. But those decisions “are being made in a business environment where the long-term outlook for oil and natural gas prices is deteriorating—in part because green energy is eroding demand for fossil fuels. And those writedowns signify a more pessimistic assessment of the profit (and tax) potential for future fossil fuel production.”