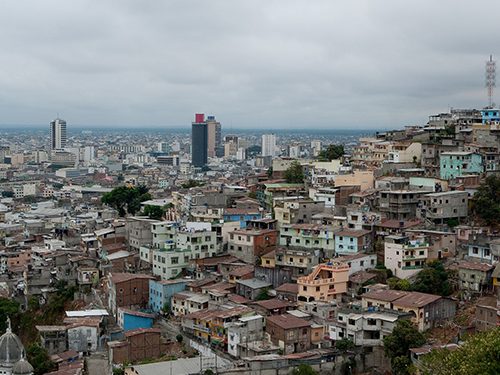 The citizen brigades of Guayaquil, Ecuador, were established to help the city’s poor find safety during extreme weather events. But the results have gone far further—with positive reverberations both political and personal.

“Ecuador’s largest city, with around three million inhabitants, is among the most vulnerable coastal cities in the world,” writes the Globe and Mail. Guayaquil is already at constant risk of flooding as the rainy season grows ever more intense, and some extreme climate scenarios list it among the cities that will suffer the most from sea level rise—ranking alongside Guangzhou, Mumbai, and New Orleans.

But it is the fact that an estimated 70% of the city’s population lives in informal, ill-serviced settlements along the deltas of the Guayas river basin that truly places Guayaquil in the crosshairs of calamity.

Now, under a partnership between the city’s risk management department and CARE, some of these communities are taking a hand in ensuring their own safety, thanks in large part to 28 “brigades” of local volunteers who have been “trained how to respond in emergencies and evacuations, and to exchange information with institutions such as the fire department, police, and hospitals.”

Aiding in such efforts: “the ‘sala de incidencia’, a video surveillance hub where reports from the transport system, the police and fire departments, and the brigades are collected and analyzed.”

Brigade member Lorena Lozana Charcopa told the Globe her training has left her and her fellow brigadiers much better prepared when disaster strikes. “We have seen so many floods, as the water is coming in from all sides,” she said. “We have to learn what to do. Now we learned, and it can help us evade even death.”

In addition to offering training, the brigades are also building social cohesion—and providing a cornerstone for advocacy.

“We see how they grow into political organizations that learn to fight for their rights and take decisions in other fields,” said Monica Menendez, subdirector of Guayaquil’s risk management department.

“We are in direct contact with the municipality,” said Charcopa. “We also request other things, such as a soccer field or a sewage system… and our problems are resolved much quicker.”

The brigades have also nourished a sense of belonging among many who have never felt such bonds before, writes the Globe.

“I made a lot of new friends. I am part of a group now,” said brigade member Jaime Criana.