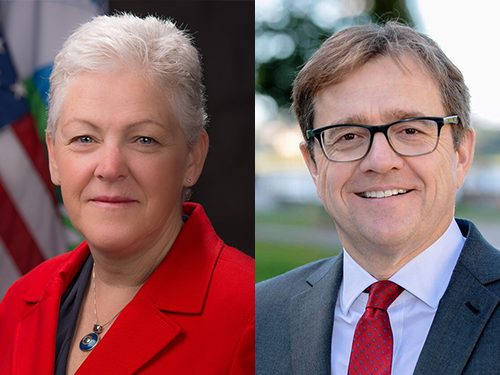 With a new administration in Washington, DC setting climate action as one of its four defining priorities, Canadian Environment and Climate Minister Jonathan Wilkinson has opened conversations with his U.S. counterpart on “an array of potential new agreements” for cross-border cooperation, the Globe and Mail reports.

“Those could include cutting methane emissions from fossil fuel production, expediting sales of electric vehicles, and increasing hydroelectricity exports from Quebec to states seeking to get off coal,” writes columnist Adam Radwanski, citing Wilkinson’s account of his first call with newly-appointed National Climate Advisor Gina McCarthy.

Wilkinson also “acknowledged that he began trying to navigate the process of preventing [U.S. President Joe] Biden’s Buy American policies from hurting a Canadian clean technology sector seeking to compete for large U.S. government spending on decarbonization,” Radwanski adds. “Canada is looking to benefit rather than suffer competitively from a highly ambitious presidential climate agenda that includes decarbonizing the American electricity grid by 2035, net-zero emissions across that country’s economy by 2050, and spending as much as US$2-trillion toward those ends.”

Radwanski goes into detail on some of the early points of agreement Ottawa is likely to seek out with the Biden administration, including coordinated methane emission reductions, hydropower exports, fuel economy standards, and a continental zero-emission vehicle mandate. Wilkinson said cooperation on border adjustments is on his list, but won’t be “the first one out of the gate” in the cross-border dialogue.

“Yes, it will be part of what I think we want to talk to them about,” he told Radwanski. “But there’s a lot of things we can do that will get us farther down the climate action path quicker.”

Wilkinson stressed that the conversation “is at its earliest stages,” the Globe columnist notes, at a time when the new administration is still focused on “simply reversing environmental deregulation” during Donald Trump’s four years in the White House.

“I think that we all have to be cognizant that they’re coming into office after four years in which effectively nothing was done on the climate file,” Wilkinson said. “We can’t expect that they are at the same level as we are in terms of their thinking on these things, given that we’ve had five years and they’ve had four weeks.”

Other writers are making that very point—but not quite from the same perspective as Wilkinson’s. In an opinion piece for CTV News, Équiterre Government Relations Director Marc-André Viau says Biden’s arrival in the White House leaves Canada with “no more excuses” to delay climate action.

“By signing a series of ambitious executive orders on climate during his first days in office, President Biden and his administration have greatly ramped up the pressure on Justin Trudeau’s government,” Viau writes. “For the first time in four years, the man leading our neighbours to the south is a credible head of state who takes his climate responsibilities seriously. We must ensure that our own interests are served, as well.”

Despite “promising developments” in recent weeks, including a draft climate accountability bill and new action on carbon pricing, Viau says Canada still needs to step up. “On the eve of a climate summit to be held by the Americans in April, Ottawa must adopt a more ambitious set of climate strategies and leverage the current momentum to translate plans and ideas into action,” he writes.

On The Conversation, meanwhile, York University adjunct professor Bruce Campbell lists five areas where Canada’s climate performance is lagging behind Norway’s. “As major oil and gas producers and exporters, Norway and Canada share a particular responsibility for confronting the planet’s existential climate threat,” he writes. “However, their different political, economic and cultural features have resulted in major differences in their climate policy track records.”

Campbell sees these differences between the two countries:

• Where climate policies in Norway are determined jointly by the government of the day and state fossil Equinor, Canada’s privately-held fossils “have more leverage on climate policy because they control their production and investment decisions at home and abroad, and are accountable only to their shareholders.”

• Norway is a unitary state, with “uncontested jurisdictional authority” for climate policy—a huge advantage over Canada’s division of responsibilities between federal and provincial/territorial governments.

• Climate action has much wider political support in Norway, leading to greater stability in climate programs. “In Canada, wide swings on climate policy over the past 40 years have thwarted sustained advances,” he writes. “While a majority of Canadians now support decisive action on climate change, there are splits along party lines and geography, with most Conservative provincial governments opposing a carbon tax.”

• Norway has been more open to consulting labour unions and non-government organizations on climate policy, in a country where “lower levels of economic inequality and a stronger social safety net reinforce its robust democracy.”

• Where Alberta “squandered its oil wealth” and has left its vaunted Heritage Fund to atrophy, Norway’s sovereign wealth fund “now holds $1.3-trillion in global investments, which facilitates its climate transition.”